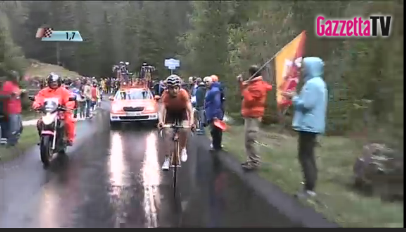 Italian Stefano Garzelli, Giro d'Italia winner in 2000, led the race over its highest point, the "Cima Coppi" prize awarded on the Passo Giau this year, and survived to the bottom of the day's final climb to Gardeccia, but it was Euskaltel's Mikel Nieve who caught and passed him on the final ascent to take the 15th stage of this year's Giro.

The battle for the maglia rosa was a stalemate in the end, but there was no shortage of action over today's five-summit beast of a stage. Second-placed Vincenzo Nibali of Liquigas attacked on the descent of the Giau, still two climbs from the finish, and got almost a minute ahead of Saxo Bank's Alberto Contador, but the Spaniard used several countrymen from other teams (notably Movistar's David Arroyo) to reel in the Shark. Nibali then exploded on the Passo Fedaia and sagged behind not just Contador but his other competitors for podium placings, only to use his tremendous descending skills to rejoin the group for the final climb to Gardeccia.

There, however, when the attacks went it was Contador who could best respond. The great multiple-grand tour-winner devoured the final climb with relish, followed by his main rivals who were scattered along the road up to this Dolomite alpine wilderness. Stage results:

And the new GC: 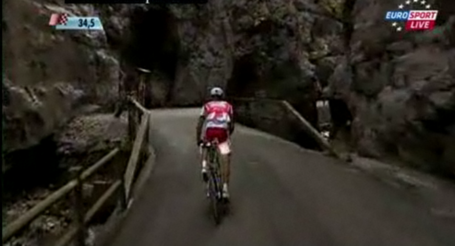