Man With The Plan

Share All sharing options for: Man With The Plan 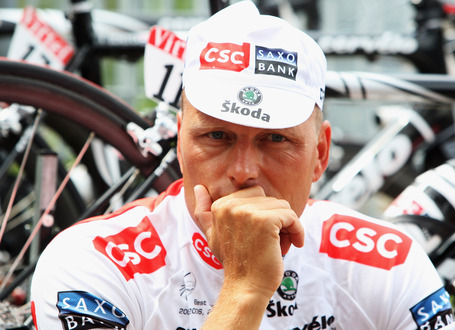 Is there a better in-race tactician than Saxo chief Bjarne Riis? A better builder of teams? A more successful DS?

I don't have an answer, per se, about Riis' string-pulling prowess. You'd have to be in the team cars to know who pulls what strings before you could say anything definitive. Also, Riis has a team of directors who pitch in too. And then there are the riders. But riders come and go; sporting directors too (adieu Brian Nygaard). Going back over the years, about the one constant at CSC/Saxo Bank/Sungard is Riis himself. That, and winning. At the very least, he doesn't get in the way. At most... he's the master puppetteer.

Why I feel the need to praise Riis right now is, naturally, due to the shape of this Giro d'Italia. By luck or genius, Riis has Alberto Contador exactly where he needs to be headed into the final phase of an extraordinarily difficult Giro. Sure, Contador is the best, no matter what. But he can be pressured, as we saw last year (more on that in a moment), so it was a great move on Saxo-Sungard's part to have Contador riding so aggressively in the first week. And surely it was planned -- seeing Contador on the attack in Tropea, at the end of a non-GC stage, was a tipoff that he might just blow the doors off everyone on Mount Etna. Which he did, and then did again in Grossglockner and again the next day. Even before the mountain time trial and another week of mountains, it was clear this Giro was over.

Why is this so brilliant? To the flip:

Why is this so brilliant? Because Contador is a looming presence. Surely in the minds of his rivals, seeing him go up the road is confirmation that they don't have a chance. Ordinarily in a race like this riders would hold back for the final week. But seeing Contador sitting back, waiting for week three, would conceivably embolden his rivals, and a week in the Dolomites where it was everyone against the treble-Tour champion could be extremely stressful for Saxo. Riis and Bert snuffed out that hope before it could grow.

Doubly smart too... Contador will likely cruise to Milan with the win, under no real pressure in the final week. He can simply follow wheels, and even there he doesn't have to all the time, though he will, and with ease. Which means, as much as is humanly possible, Contador will emerge victorious in this Giro without having completely wrung himself out. If for some reason he's allowed to start in the Tour, well, he might still suffer there but Saxo are doing their best to maximize his chances of going for the Double.

Crediting Riis with this is speculative -- we're talking about Contador, after all -- but if the most he can do is not screw things up, then surely Riis has done that. Contrast this with last year's Tour, when Contador was riding for Yvon Sanquer and Riis was directing his chief rival Andy Schleck. Despite much public fanfare about his cobble riding, Contador got completely outfoxed by Riis and co. in the Arenberg stage, when Fabian Cancellara motored away with Schleck, leaving Contador in the dust. The 41 second lead (53" gained that day +10" gained in stage 8 minus 22" lost in the prologue) held up into the mountains, where Schleck could just stick to Contador's wheel through the race's manageable climbs. Then see who blinks in the time trial. It was a damn good plan, one that could have seen the unseating of a dominant champion, had Schleck kept his chain on.

Arugably this was as masterful as the 2008 Tour plan, which still stands as Bjarne's only Tour win (Riis and Ivan Basso won the 2006 Giro). There, Riis deployed his two decoys, both Schlecks, effectively enough to put a superior but otherwise defenseless Cadel Evans under constant duress. IIRC there was some talk about how they really meant for Frank to win (Andy was too green still), but lurking comfortably behind the battle lines was Carlos Sastre, who famously launched his career-defining move up the Alpe to win the Tour. None of the CSC guys could have beaten Evans one-on-one, but collectively they pulled it off.

Riis' success in the classics is just as impressive. Sure, launching Fabian Cancellara last year didn't require much work on his part, but grooming Cancellara for his 2006 Paris-Roubaix win, and deploying him aggressively, was at least part Bjarne. Even more so was O'Grady's decoy win a year later. But sweetest of all, and very typical of Riis, has to be Nick Nuyens' Ronde win. Riis has long had a knack for picking up talented but overlooked guys -- Sastre, Julich, Zabriskie, etc. -- and reviving their careers. Nuyens had a good start with Quick Step but faded a bit at Cofidis and became lost at Rabobank. Here's how he described to VeloNation the experience of switching teams this offseason:

[F]rom the moment Riis contacted my manager, he immediately said that he wanted to work with me. There was no discussion about money or anything else, it was like: ‘he’s a good rider, he’s won some semi-classics but I think he can do more,’ and when a man like Bjarne talks like that it gives you immediately a lot of confidence. Then also when we started to work on the training camp. Just small things, small words, that help you to have more confidence.

Riis built him up. Riis didn't put him in position to win de Ronde -- that was luck and Nuyens' own instincts, one assumes -- but at a minimum Riis set Nuyens up to be at his best, to the shock of many who'd written him off. Meanwhile, Cancellara got little return on his superior form, thanks in part to the actions of others. But the year after he leaves Saxo, suddenly he's shut out of the monuments. It's hard to write that off entirely as coincidence.

There are other examples -- Tyler Hamilton, for one -- which raise questions about Riis. A former doper himself (1996, whaddyagonnado?), Riis has presided over his share of mirages. Hamilton came out of domestique duty to LBL victor, then a grand tour leader (at Phonak), before being caught. Basso was Riis' biggest prodigy, molded from a young age to be a grand tour winner, before his dog's medicinal needs became public fodder. Riis has had his share of black eyes. But the Schlecks and Sastre and Cancellara aroused minimal suspicion, and apart from Contador's troubled 2010 there is little to raise eyebrows. Never know with this stuff, but I would not call Riis Cycling an especially dirty corner of the sport. I tend to think of it as cleaner than the norm. Time will tell.

Anyway, chapeau to Contador, he's earned the title here that seems so inevitable. And chapeau to Riis, as he adds a third grand tour to his own glittering resume. Probably not done there either.