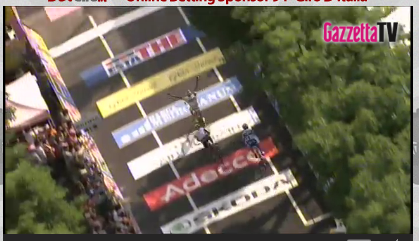 Eros Capecchi won from a three-man breakaway to give Liquigas its first stage win of the Giro d'Italia in San Pellegrino Terme today, edging break mates Kevin Seeldraeyers of Quick Step and Marco Pinotti of HTC. The race broke up on the Passo di Ganda, a cat-2 climb in the last hour of the race, and several breaks formed while the main contenders stayed out of trouble. On the long descent to San Pellegrino, the three-man break of Seeldraeyers and his two Italian companions left everyone behind. In the final KM, Pinotti got stuck on the front, dashing his hopes of another HTC stage, and while Seeldraeyers was desperate for a Belgian win, he couldn't match Capecchi's closing speed.

No changes in the overall.