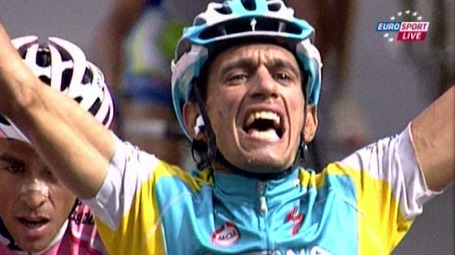 Astana's Paolo Tiralongo survived a lone break on the climb to Macungana to win stage 19 of the Giro d'Italia, thanks in large part to the benificence of his ex-teammate Alberto Contador. Tiralongo made it alone up the final climb to within 700 meters of the line, but a series of attacks behind him among the GC leaders eventually drew out the maglia rosa, who caught and dropped Joaquim Rodriguez, John Gadret, and the day's other pugilists in yet another devastating acceleration. Contador motored on up to Tiralongo, but then slowed down, exchanging some words, after which the soon-to-be-Giro winner led his ex-mate to the line and passively watched Tiralongo take the stage. Stage gifts are a custom in cycling, and Tiralongo is a worthy recipient, having been on his own for some 5+ km on the last climb. Contador is a worthy gift-giver too, with plenty of wins to his name and Tiralongo not being a rival to whom gifts maybe shouldn't be given.

Slight changes to the overall: