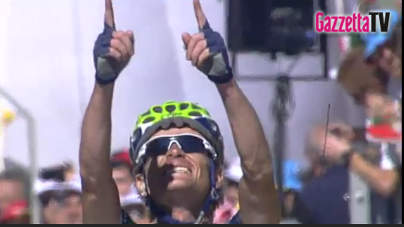 Movistar's Vasil Kiryienka broke away from the favorites and held on over the massive Colle delle Finestre and the final climb to Sestriere to win the 20th stage of the Giro d'Italia alone, well ahead of any pursuers. The victory was bittersweet for Movistar, which wasn't a big factor in the Giro and suffered the tragic death of teammate Xavier Tondo in a domestic accident earlier this week. In an emotional scene, Kiryienka dedicated his victory today to his lost teammate. Back in among the top GC riders, Joaquim Rodriguez and John Gadret made up a bit of time, while Roman Kreuziger and Vincenzo Niabli lost a bit, but the battle for the pink jersey was long over and the battle for the remaining positions will be settled in tomorrow's time trial, with no big changes today. Steven Kruijswijk of Rabobank made a play for the white jersey today when Kreuziger was dropped on the Finestre, but Kreuziger descended impressively and cemented his position as the best young rider in this year's Giro.

Nibali probably can't catch Scarponi for second, so the podium looks set. Gadret and Rodriquez are poor time triallers, so Rujano could catch J-Rod, while Kreuziger and Menchov will be looking to leap past some or all of the 4-6 guys.