Share All sharing options for: Maglia Rosa, by Herbie Sykes 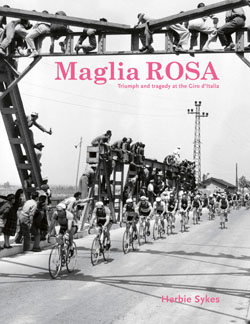 Title: Maglia Rosa: Triumph and Tragedy at the Giro d'Italia
Author: Herbie Sykes
Publisher: Rouleur
Year: 2011
Pages: 312
Order: Rouleur
What it is: A history of the sexiest of the Grand Tours, the Giro d'Italia, told through the stories of some of the people who have contributed to the race's rich tapestry.
Strengths: Rouleur have a reputation for beautiful books and magazines, and they've excelled themselves with Maglia Rosa. A hundred and fifty images enliven Sykes' text. The text itself is a lively tale - Maglia Rosa is no coffee-table cycling photo album - painting a picture of the race by telling the stories of girinni themselves, some of the men who made the race what it is today.
Weaknesses: The standard quibble with such books - ninety three editions of the race, three hundred and twelve pages, do the math.

The story of the Giro d'Italia begins in Milan in 1896, when Camillo Costamagna teamed up with Eliso Rivera and created a bi-weekly sports paper which, instead of appealing to fans of one  sport or another, would cover all sports. It would appear on a Friday, previewing a weekend of sport, and then again on the Monday, telling the story of the weekend just passed. Their 1896 launch date was timed perfectly to coincide with the first modern Olympics.

Between them, Costamagna and Rivera created a sports paper which still exists today: the Gazzetta dello Sport. Over the first three years of its life it was printed on green, then yellow, then white newsprint, before finally the publishers settled on a colour they liked. Pink.

Bike racing had come to Italy in 1870, with a thirty-three kilometre crono between Florence and Pistoia. In 1876 Milan-Turin was born, a two hundred kilometre haul over strade bianche. Milan became a hub for cycling, with races reaching out to Florence, Alessandria, Asti, Verona. The Tour of Piedmont was created. In Tuscany there was the five hundred kilometre monster, the Kings Cup. The Corsa Nazionale was another forty kilometres longer still. 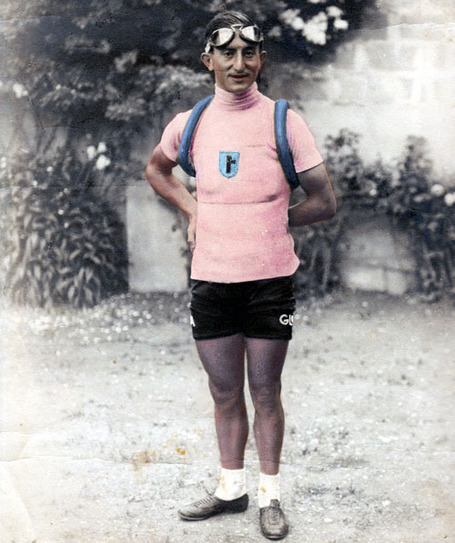 In 1905, a rival to the Gazzetta decided to promote its own bike race. Gazzetta promptly responded with Milan-Milan, a two hundred and thirty kilometre race that took place in November. Like the Gazzetta, Milan-Milan still exists today, though it has a different name, the Giro di Lombardia. The following Spring, the Gazzetta added a new race, Milan-Sanremo. Three years later, they added the Giro d'Italia to their stable. Barely a decade later, with all three races firmly established, the Gazzetta owned three seasons of cycling, Spring, Summer and Autumn.

The story of the Giro d'Italia begins in Milan in 1906 when Giovanni Gerbi, after two hundred kilometres on his own, was caught in the closing kilometres of the first Milan-Sanremo by Gustave Garrigou. Knowing that Garrigou had the beating of him in a sprint, and knowing that his own Bianchi team-mate, Lucian Petit-Breton, was closing on the pair of them, Gerbi slowed things down at the front and then, with Petit-Breton on board and the three racing for the line, pushed Garrigou off his bike and sealed the victory for Petit-Breton.

Gerbi was a hard man from the Piedmontese town of Asti who had been expelled from school for his constant brawling. Wearing a crimson jersey he won his regional championship and earned the nickname the Red Devil. Aged seventeen, he won the Kings Cup. In 1903, he worked out that there was more money to be made racing a bike than baking bread and became a professional cyclist. He won Milan-Turin and, the following year, became the first Italian to ride the Tour de France. On the Col de la Republique he was set upon by fans of the local favourite, Antoine Faure, and had to abandon the race.

In that 1906 Milan-Sanremo, having worked out he couldn't beat Garrigou, Gerbi did some mental arithmetic. Bianchi were paying him two-and-half lire a kilometre if he won the race. But they were paying Petit-Breton six times as much if he won the race. Gerbi did a deal - fifty-fifty - and did the deed. He lost the race but pocketed more than he would have had he won.

Later than same year, at the now renamed Giro di Lombardia, Gerbi broke away on his own and then persuaded a signalman at a level crossing to close the gates and delay his pursuers. He won the race by forty minutes. When his skulduggery was revealed he was stripped of his victory and banned for two years. A mob descended on the Gazzetta's offices demanding the punishments be reversed. For these tifosi, cycling was a game of the head as well  as the legs, and Gerbi had just been using his head. His punishment was reduced. Everyone was happy, especially the Gazzetta, who had seen their circulation soar on the back of Gerbi's exploits.

Gerbi rode the first Giro d'Italia but a crash befcore the race had even made it to the outskirts of Milan left him chasing from the get go. Two years later he was one of a group of riders who were charged by a herd of buffalo. By 1912, he really wanted to add the Giro to his palmarès and tried to buy the services of Carlo Galetti, the winner of the previous two editions. Galetti turned him down and opted instead to ride for Atala.

Gerbi, offended by Galetti's haughtiness, challenged him to a three-hundred kilometre duel, a time trial over the course of the Giro di Lombardia, with ten thousand lire to the winner. Galetti again declined the offer. Gerbi took his story to the Gazzetta, who immediately saw the publicity potential and the race was on. Gerbi led to the turn but suffered in the hills around Bergamo. Galetti beat him back into Milan by twenty seconds shy of five minutes. Galetti then beat him again in a Giro that - officially anyway - only recorded a team winner, Atala. Disregarding the wishes of the teams that their effort should be more newsworthy, Galetti's victory - his third in a row - is the one recalled in Maglia Rosa.

Gerbi probably should have won the Giro at least once in his career, he was a class rider. He never did though, in all his years of trying. But it was through his efforts, and the efforts of riders like him, who brought excitement and a passionate fanbase - the tifosi - that the Giro d'Italia sealed its place in the hearts of Italian sports' fans.

The story of the Giro d'Italia begins in the heart and the head of whoever is telling it. For every person there is who could tell the story, there is a different story to tell. In Maglia Rosa Herbie Sykes tells a history of the Giro - just a history, the history would be an impossible tale to tell -  that comes straight from the heart, a history that works because it tells the the stories of the girinni themselves, the men who have made the Giro d'Italia the race it is today. Those seeking a year-by-year, stage-by-stage, blow-by-blow account of the race will be disappointed. Sometimes the winning of an individual race is dealt with in a sentence. Sometimes the losing of an individual stage is dealt with in several pages. The story of the Giro d'Italia isn't just about the winners.

Sykes' big trick is to humanise the history of the Corsa Rosa. If is often said - usually when race organisers are in dispute with riders - that races make the riders, and not the other way around. By telling the stories of individual riders, Sykes 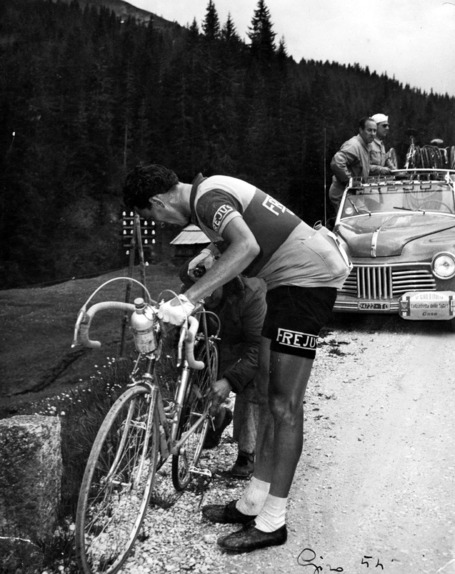 gives the lie to that. But the stories Sykes tells are not just of the giants of the road, the Alfredo Bindas and the Gino Bartalis and the Fausto Coppis, the riders whose stories already fill so many pages in so many books. Sure, Sykes tells some of the tales you would expect to find in any hitsory of the Corsa Rosa. But he is happiest when talking about riders like Tino Coletto, Orfeo Ponzin, Italo Zilioli, stories not so well known.

Those three riders - Coletto, Ponzin and Ziliolo - provide a handful of chapters which, on their own, make Maglia Rosa well worth the cover price. In those chapters Sykes tells stories which cut to the heart of Maglia Rosa, which cut to the heart of the Giro d'Italia itself. They're stories of ordinary men and an extraordinary race. And - if that's not enough - they're some of the best cycling story-telling I've yet read. Read them.

No book about the Giro d'Italia could work without telling you something about Italian history over the course of the last century, and Sykes weaves in the social story here and there. Nor could a book about the Giro ignore the current problems of Italian cycling. Give the history of the last quarter of a century, it would be easy to either ignore the problem of doping, or to write off Italian cycling and the Giro as lost causes. But Sykes is better than that. He is firmly against doping but is resolutely upbeat about this sport he loves.

What the Giro represents for Sykes is a source of stories of heroes:

"The sport, its age-old moral ambiguity notwithstanding, prevails simply because, by definition, it continues to make heroes, to disseminate legends. That on occasion they are embellished, sometimes beyond fathomable recall is, to some degree at least, inevitable. The Giro d'Italia, by turns mind numbingly dull and breathtakingly exciting, was after all invented to create headlines, to sell newspapers. That's precisely why Gaul's epic on Bondone has acquired mythical status, precisely why men like Tino Coletto were made to ride over the Gavia."

Heroes though are hard to come by in our modern era:

"Since Pantani's 1998 pyrotechnics and subsequent expulsion from the Giro, the race has staggered punch drunk from scandal to crisis and back again. [...] a cursory glance at the Giro d'Italia's 21st century roll of honour appears, on the face of it, to damn the race as morally bankrupt."

Most of Sykes' anger when it comes to doping is reserved for the Giro's direttore corsa, Angelo Zomegnan, who - Sykes argues - wilfully turns a blind eye to the damage doping is doing not just to the Giro d'Italia, but to all cycling in Italy. Why, Sykes asks, does Zomegnan tolerate riders like Danilo Di Luca and Alberto Contador. Why does the race still associate itself with men like Francesco Moser - who, for many, symbolises blood doping:

"The fact that these, and others like them, are allowed remotely close to cycling's putrefied cookie jar is not only intolerable but also utterly, indescribably stupid. In allowing them the chance to continue their pilfering the race insults the intelligence of its biggest sponsor, the Italian public. The proof lies in the disappearance of beautiful events like the Tour of Lazio and, most depressingly of all, Milan-Turin. They are lost not, as has been suggested, through natural wastage, but because the organising committees are unable to find businesses and community leaders misguided enough to invest in the PR train crash that Italian professional cycling is in danger of becoming."

Despite this though. Sykes is as upbeat about the sport's future as anyone who knows about its past can be. Cycling is changing and Italian cycling will one day catch up with the rest of the sport. The twenty-first century Giro will be as rich a repository of legend as the Giro of the last century was. With luck, it will find someone as sensitive to its tale as Sykes when it comes to recording some of its history.