Share All sharing options for: Training Camp and First Races

A lot has been going on within Horizon Fitness RT over the last couple of months, so DS Stefan Wyman has opened up the doors to shed some light on the running of a team during this busy period. Stef discusses training camp and the team's first races of the season.

As usual Stef will be popping into the cafe over the next couple of days to answer any questions you may have on what he's written below or anything else women's cycling related. 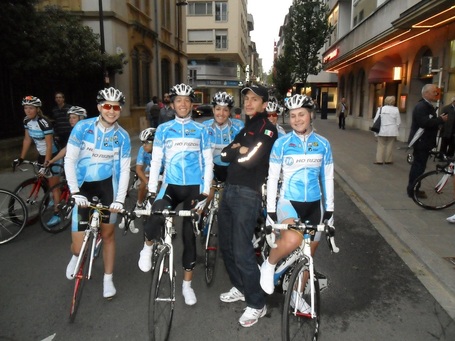 So there was a lot of build up, around 6 months in total to get this season sorted and the team on the road. The logistical nightmare of sorting the training camp which had 17 people involved was fortunately balance by the amazing hotel (Hotel Villa Platani in Riccionne) and the training terrain and weather that awaited us all. Planning for riders that are at Uni, working, riding on the track for GB isn’t simple. It’s not as easy as saying here’s the flight details…be there.

Because of this kind of planning and the other aspects of being a DS, I don’t get as much time as I’d like on my bike, but for this camp the idea was very much for me to be riding with the girls. So before the camp started I rode for 2 weeks, learning the routes and getting into good enough shape to keep up. 20 hours a week was shock the newly reduced in size system. Having lost 14kg’s over the winter, I actually felt some pressure to be able to climb with at least the last riders in the group. It’s not that easy to work out how your form is when your training partners are Jamie Burrow and Helen Wyman. My arse was kicked every day. One very grim day in my first week on the bike was a 5.5 hour hilly group ride. I felt grim, was saved by a gel (Grazi CNP Prefessional) and never wanted to see a bike again.

This camp was important in many ways. Firstly it’s probably the only time this year all the riders on the team will be together in one place. That might seem strange to people looking from the outside but it’s never easy to get people together once the season starts. It is always the best opportunity we have to gauge how riders are in terms of form and moral and what we can do to help them. During a camp like ours, you also get a good opportunity to see how certain riders work together and how that could be used to our advantage in a race. This particular training camp was also the first chance to see a rider like Nancy in action. She’s clearly very talented from her ‘numbers’ but it’s nice to see how that transfers into a road situation.

Every detail of the camp was planned with great care. From sitting down with the hotel owner, Valentina, to plan the menu, to rider meetings and travel arrangements. There was also a huge amount of planning between myself and Jamie Burrow to devise a training plan set to blend the needs of the individual riders, the team and other guests on our camp (Such as Tiff, Rob ‘Pantani’ Jackson and Katie Noakes). Jamie did an amazing job and I think managed to tailor the plan so that everyone got the maximum out of it. There was even the bonus that the hotel put on live music on the middle weekend of the camp to let the riders kick back and enjoy themselves. 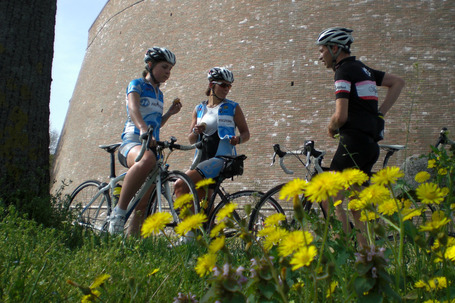 Training camps shouldn’t be about just putting in miles on the bike. To get the most out of them, and to make it worth the investment, they are pretty full-on events. I think everyone working on the staff side of the team at the camp left pretty exhausted. Some of the tasks involved rider schedules and race planning, team photographs, and ensuring riders are getting the most of their products.

Barney and Ronny worked very hard to ensure the bikes were set up perfectly for each rider. This is really important to prevent injury and get the most efficiency from the bike. That’s not always an easy task when you have rider that vary as much as ours, and particularly when it includes a micro person such as Nancy.

To sum up the camp, I don’t think I can put it any better than Tiff put it perfectly in her recent blog: Thanks also to Jamie and Valentina; if there is a better run training centre/hotel set-up in the world of cycling I would like to see it. The hospitality was marvelous, and every last detail of our program was thought out and delivered to perfection. If you are thinking of making a cycling trip to Italy, look no further.

For me, the camp was a lot harder work than a race itself. A race has less riders, simple logistics and expectations that are clear. But I can say I left the camp very satisfied that it had been a total success and I feel we’re in a good position to start the season. That wasn’t far away….riders landed in the UK at 11pm on Saturday and were on the start line in Cheshire the following morning.

Although I wasn’t at the race as I was returning to Belgium (With a newly broken toe that’s to helpful person dropping a turbo trainer on my foot while I was packing) to prepare for 5 European race, we had Barney Storey there looking after the girls. Despite an unfortunate incident with a car and the peloton, the race was a success and we came away with a very respectable 2nd place. The reward for that was a trip to Belgium for Hannah Rich to take part in 2 major events. It was clear to us from what we’d seen in Italy and what happened in the UK that these chances are just what Hannah needs.

So onto Dottignies and our first Euro event of 2011. The organiser of this race is very good. He has run women’s races for number of years, and runs them the day after major events. His first event is the day after Flanders, and this one the day after Fleche. That makes sure he has a good field of riders and many nations represented. The race went well and I was very pleased with what I saw. Dani, in her first race back on the road got 3rd having placed herself in the race winning break. Hannah, led out by Claire, took the bunch sprint for 5th. She backed up her UK result and with her building form and understanding of what she needs to do, should be on for a very strong season this year.

Our 2nd event was on Sunday, GP Roeselare (UCI 1.1 ranked) and we had a strong line-up. However when you line up against the likes of HTC and Garmin, you always feel some pressure. Women’s cycling is getting stronger and I personally feel there is a more rounded feel the peloton with the changes made at Garmin this year. The ‘Super team’ structure is not as strong, giving a more balanced feel to the peloton. I think this makes the races more open, less negative and much more inviting place for aspiring teams like ours. There’s a long way to go, but I really feel for the first time in many years there is a massive opportunity for the sport to takes several steps forward.

HTC are very strong, and with several cards to play won the race. We were happy and grateful to be on the start line, but wanted to put in a good show, and I think we did that by placing Helen in the final selection of less than 40 riders. Dani was 23rd last year in this event and we wanted to better that. Helen, a renowned sprinter (erm…not) finished in 18th. We had our share of bad luck along the way, but we left very confident that we could repeat or improve this the following weekend in Luxembourg.

So on to those events. Three races starting with a Team Time Trial around the closed roads of central Luxembourg City. We were off at 8:20pm and were targeting a top 15 finish. The quality of the field was good. 19 professional or National teams out of 25 teams on the start list. We were 5th team off, and with a great performance went into the lead. As the teams behind us came to the finish we only slipped slightly to 3rd, a position we held until the last 2 teams went. It ended with us in 5th, something me and the team are very proud of.

Saturdays race was a UCI 1.1 ranked event. It was all going well with Dani and Helen riding very strongly near the front of the bunch. Annie, in her first road race of the season was up there with them putting in a great performance. Then on the finishing loops there was a crash bringing Helen down. Injury prevented her from re-starting and after a few ‘kind’ words to the more then useless medical staff on hand, we continued to the finish to see Dani finish 6th in the bunch sprint and take 25th. Claire was just behind with a solid ride.

Sunday was very similar event. Exactly the same opening loop, before a hilly small loop, which you completed 6 times. With Helen out we were down to 5 riders. The race was very similar (So similar the first 4 riders were the same both days). Claire and Dani were in a small group behind the leaders until Claire crashed out on the last lap. Dani finished 28th, disappointed, which is a reflection of the high standards she sets herself.

Overall it was a success. 5th place in the TT was great. Two top 30’s were less than I’d hoped for if I’m honest but I think that shows how much ability I feel this group of riders have got. A few more weeks together and I think we’ll be riding very well as a unit and progressing well towards the National Championships in June.

While I was in Luxembourg with the team, Barney Storey had the other half of the squad racing in Bedford, where we won 2 stages, the Queen of the Hills Jersey, and finished 1st, 2nd, and 4th on GC. A fantastic performance and something I’m really proud of.

Anyway, enough from me. There are some more great events coming up including the Tour Series events, Smithfield Nocturne, Events across Belgium and Holland and to end the first half of the season, the National Championships.