Share All sharing options for: TourChampion - a Giro fantasy game

So, you love the Giro, right? You think you know cycling? You enjoy a challenge and aren't afraid of bits of foreign language? 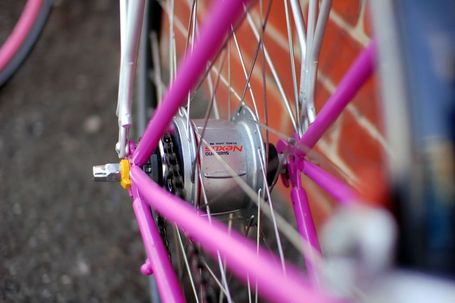 In that case you're perfect for TourChampion, the single most fun GT centric cycling fantasy game on the planet. Even though it was invented by Dutchies. More information ... sotto il salto.

TourChampion is a genius little game, run on www.tourchampion.net (no, these guys don't pay me). Registration doesn't start til tomorrow (yeah, last minute, but still). You can make a subleague on the website (I will), so we can all play between us.

Anyway. The readers' digest verision of the game is this:

You make a team of nine riders, no two can be part of the same real life team. This is fun, because it means we'll get to see Albertina try to decide on which Euskie to take along (yeah yeah, I know, I owe you another Leffe).

The game decides the categories, and sometimes some riders end up in weird sections, so it's worth to have a look around for hidden gems. The GC will be calculated on the time of your best three every day. Translation: if you pick the guy to go in the successful twenty minute break your team will do very well. Also, if your A-guy wins a stage, but your second and third best are both 30 minutes behind, you won’t get far. But there's also a KoM and a - ha! - sprinters ranking.

The one thing which could be a worry, is that the entire thing's in Dutch. But Pigeons, Urlaub and Millsy can all testify that that really isn't something which should stop your from playing. I've written up an entire translated how to, which you can find below. As noted before registration doesn't open til tomorrow, but you can start working up the courage starting ... now.

If you participated in the game before, you simply go to www.tourchampion.net. Fill in your email address and the password you got last time into under the menu Mijn Ploeg. That’s it. You can start picking your team. Go to step 3.

- At the top of your screen there’s a bunch of menu’s, the fourth one is “Aanmelden” (signing up). Click it!

- Fill in the questionnaire, knowing that
Voornaam: First name
Achternaam: Surname
E-mail address: fill in a real one, they’re gonna send you your password
Geslacht: Sex (vrouw = woman)
All the other options are optional.

- Go to the email (watch it, mine ended up in my spam folder). There you’ll find your user name (your email address) and your password (wachtwoord), and a link back to the game. Click it!

3. Let’s pick a team!
- The site will ask you to make up a teamname. Make smt up and click whatever button is next to it (I forgot).

- You’ll now see the page where you get to pick your riders. Now, the rules! You have to pick 9 riders, no two can ride for the same team (so, you can’t have both Cancellara and Voigt, since they’re both Saxo’ers. damn)

Don’t worry, the game decides which rider fits into which category. Some riders are in weird categories, you’ll just have to live with that.

- Go insane until you’ve picked a team. The site automatically saves who you’ve picked, and you can change it til 4 days from now, so you’ve got time to ponder.

- The GC will be calculated on the time of your best three. So if your A-guy wins, but your second and third best are both 30 minutes behind, you won’t get far.

- The points and mountain jerseys are just the total of all your points for that category.

- The three links next to the rider’s name mean “change” (wijzig), “empty” (legen) and of course, random. So if you wanna change a rider in your team, you click “wijzig”. If you wanna leave the list of names, click on the red text that says “terug naar mijn ploeg” (back to my team). If you click on a rider’s name, there will sometimes be extra info under the picture.

4. How you doin’?
- Want to know how you’re doing? Click the menu at the top that says “Klassement” (standings). There’s a lot going on.

- We’ll start with the box on the left that says Klassementen TourChampion. There’s three drop down menu’s.

- The box on the right has four menu’s

* Gedetailleerde score per ploeg = detailed score per team – this tells you to click a team name in the standings on the left if you want detailed scoring info.
* Waar staat mijn ploeg? = where’s my team at? If you’re logged in you’ll see your team in the standing. If you’re not logged in OR if you wanna find a different team, fill it in here.
* Subleagues. You can make a subleague there. I’ll make one for 606. “Toevoegen” means to add.
* Dagklassement = the day’s standings.