It’s that Snap time of the year in the women’s calendar, because after last weekend’s matching podiums in the Luxembourg festival of cycling we now get an entire matching festival of cycling. The Ronde de Bourgogne may be squeezed into just two days, but it manages to include two road stages and another of those not-really-very-rare-after-all team time trials. Sounds familiar? Thankfully for 105 VDS players, we are now in May and Marianne Vos is on her give-everyone-else-a-chance break so at least the podium will look a little different.

Bourgogne, better known to English speakers as Burgundy, is the French region that sits in the buffer space between Paris/L’Ile de France and the Alps. It is most well known of course for its wine, and from the regional capital Dijon, mustard and a certain M. Chirac. And the Ronde de Bourgogne may only be in its third year, but already it has what is obligatory for any French women’s race: Jeannie Longo’s name on the winner’s trophy.

This is a three stage race, but unlike at Luxembourg, Bourgogne is a genuine stage race with a trophy available for the overall winner in addition to the prizes for the individual stages. Stage 1 is a great looking 115km starting and finishing in the town of Montnard, and passing through all the touristy sort of places you would expect from a race sponsored in part by the local council. Remember Johnny Depp and Juliet Binoche romping together in vats of molten Chocolat? Flavigny. Or if you sneer at Love and want a bit of War, go and stand by the side of the road in Alesia where Julius Caesar beat Vercingetorix in 52BC. Or you want the history, but prefer a bit of Love with it too? Try Bussy-Rabutin, whose most famous Comte, Roger de Rabutin, (and here I adapt only slightly from Wiki ) fell into disgrace for Taking part in an orgy during Holy Week, dug himself into a deeper hole by composing one of the most notorious pieces of French satirical pornography, the Histoire amoureuse des Gaules which caused him both to be sent to the Bastille and to be elected to the Academie Francaise, and played no small part in helping to make 17th century history such a popular subject. The course itself looks quite fun too: here’s the map and profile. 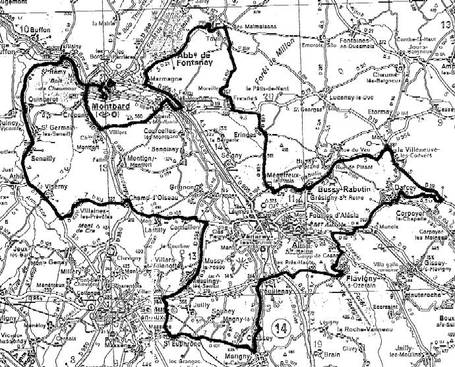 Stage 2 on Sunday morning is a 23km team time trial out from Montbard to Seigny and back, while the final stage in the afternoon is one of those not-really-a-criterium-honestly-Mr-UCI=inspector, a lap of 3.6km through the centre of Montbard to be repeated 18 time for a total race distance of 64.8km.

This race is not on the UCI calendar, just that of the French national federation, so some less familiar names get a chance to score those oh so valuable VDS points. Four UCI teams are riding: the two French teams Vienne–Futuroscope and ASPTT Dijon – Bourgogne led by Edwige Pitel and Beatrice Thomas respectively, along with two Italian teams, Michela Fanini–Rox and in their attempts to give everyone on their roster at least one ride this year, Colavita - Forno D'Assolo. Sengers Ladies, led by Emma Silversides represent Belgian interest, while all other teams are domestic French ones, including an interesting looking last minute Mixed Epinay / Ventoux which includes both the recent surprise winner at Pujols, Magdalena De Saint Jean, and Laura Weislo of Cycling News who is totally unrelated to the Laura Weislo who writes for Cycling News. Apart from sharing a really rather cool name. The name's Weislo, Laura Weislo. Do you feel lucky, punk? Gwena has a post up linking to both the race brochure (from where I took the graphics above) and a start-list. Doubtless she will also be the first with results and comment. We just try to take our, ahem, inspiration, from her work.