My final post about the Luxembourg races - I was very lucky, and the Horizon Fitness Racing Team said that if I got out there, they'd look after me and take me around all three of the Elsy Jacobs races. Hopefully you've read my stories about the night-time Team Time Trial, "backstage" at the races and my race reports from the team car and the finish-lines - but these are my video interviews and portraits that didn't fit anywhere else. It was my first time with the video camera, and yes, next time I'll take a tripod, but I'm impressed I could control my fangirl instincts enough to ask some semi-sensible questions!

There are interviews with more riders and DSs below - and here are the current number 1 and 2 in the Road World Cup standings - Annemiek van Vleuten and Marianne Vos.

This is the longest interview I did, at over 7 minutes - but it's Helen Wyman! She's a fantastic interviewee, and I could talk to her forever! Here she talks about her crash (and bottom injury) in the GP Elsy Jacobs - and the fact it was her first road crash for three seasons - the team, her 2010-11 cyclocross season and her plans for 2011-12, and so much more.

My theory is that after racing, Helen should get into commentating etc. If I was re-doing this one, I'd angle the camera to get her gesticulations - slightly hampered by the road rash on the elbow, but you'll have to imagine that! Her injuries meant she couldn't sit down comfortably, and looked very, erm, lopsided. She couldn't even get out of the team van - Horizon's DS (and Helen's husband!) Stef had to lift her! But she was very stoical indeed, and took all the jokes about bum implants, and looking like Jennifer Lopez with a smile on her face!

As well as Vos and Van Vleuten, I also spoke with Loes Gunnewijk before GP Nic Frantz - including how it feels to be Dutch National Champion: 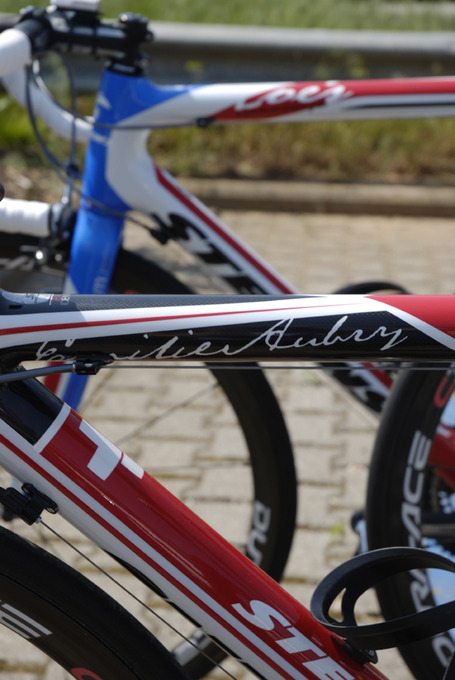 Gunnewijk has a fantastic bike, painted up in the National colours - here it is next to Emilie Aubrey's Swiss national champion's bike. So lovely! 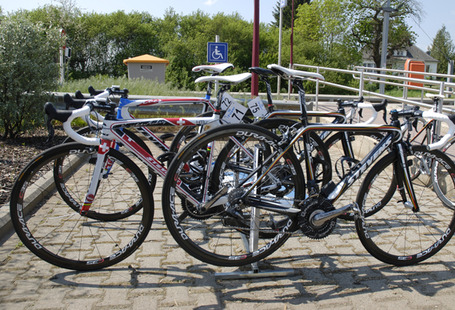 I wish I knew more about the technical side, so I could tell you about the bikes I saw - but I'm at the level when I can just talk about the pretty, shiny bikes!

So back to what I do know more about... the teams and the riders. It was fun exploring the towns to try and find where the different teams were parked. I failed completely to find where Lotto and Hitec were parked in Mamer, but Stef pulled into what was an empty car park, and when we got back from coffee, found HTC-Highroad were right next to us.

As we were sitting in the sunshine, relaxing before the racing got going, Stef pointed out HTC's Amanda Miller, who he describes as "the future of American cycling". I had to interview her, grabbing a few minutes of her time before she went off to race. Watch out for her, she's going to be huge! 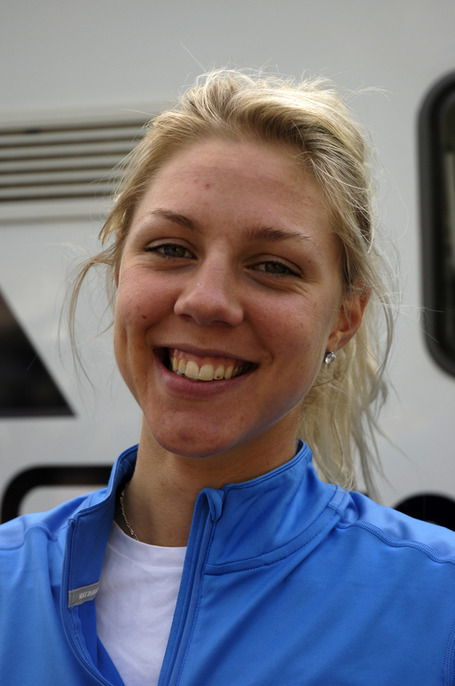 Here's her team-mate, Emilia Fahlin, after riding the GP Nicolas Frantz, who has a message for all her fans here, especially the Swedish ones - she loves you too! She apologised for her helmet hair, but of course it looks fine!

We also shared the car park with the Dolman's Landscaping Team, and the very friendly Martine Bras. Bras had had two unlucky races, falling in the GP Elsy Jacobs, but she was all smiles at the end of the day, possibly because she's got a break planned - a few weeks in Gran Canaria. Here she is with her two beautiful dogs: 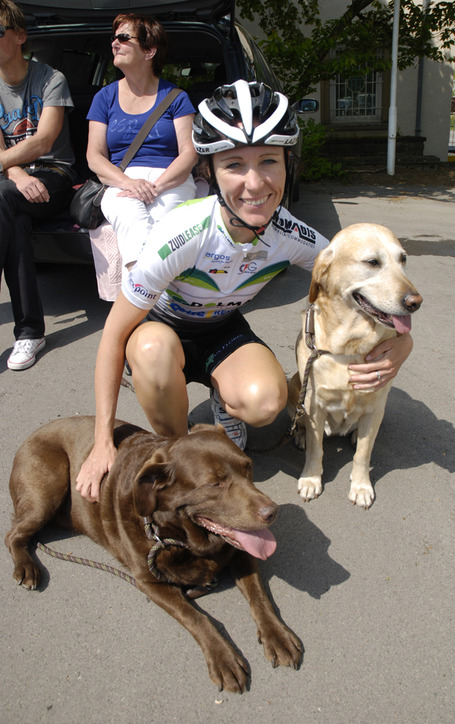 Those dogs were getting a lot of love and attention - as was Ina Teutenberg's dog, I wish I'd taken a photo of Teute and the HTC team walking back up the road in Mamer, with her dog by her side - it seemed such a great picture - but I was covered in bags, so you'll have to imagine it.

Here's Grace Verbeke, before she got ready to race GP Nicolas Frantz: 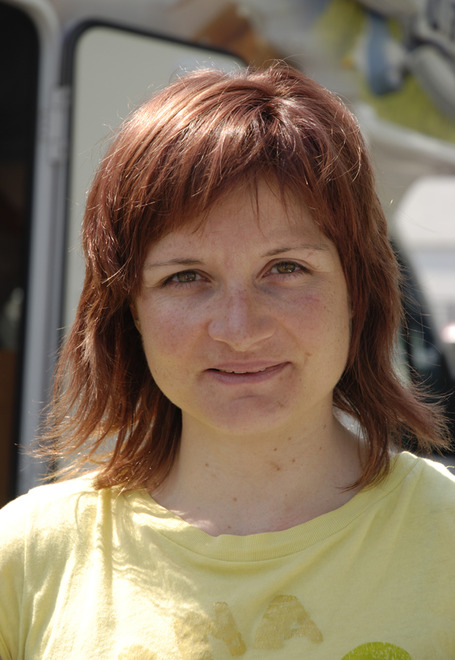 And here's the Basquest rider in the peloton, Eneritz Iturriagaetxebarria Mazaga, who also says hello to all her fans on Podium Café - did I tell you she's signed a Lointek cap for the women's vds prize collection? 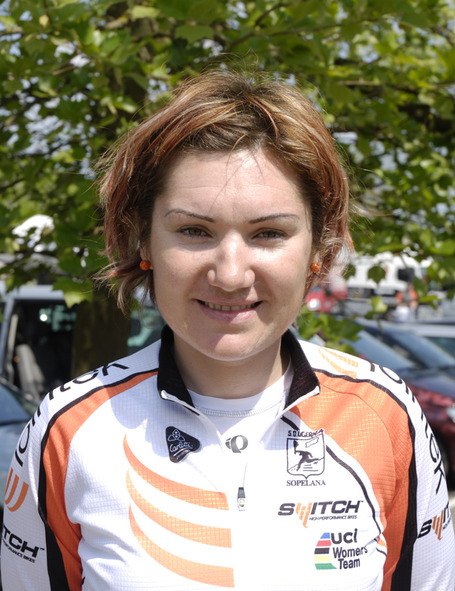 Of course, I had to interview all the Horizon riders before they rode GP Nicolas Frantz. As a huge track fan, getting to interview a current and former Team Pursuit World Champion made me VERY happy!

I had to take photos as well. Here are the GP Nicolas Frantz iteration of Horizon - left to right, Nancy Arreola, Dani King, Joanna Rowsell, Annie Simpson and Claire Thomas: 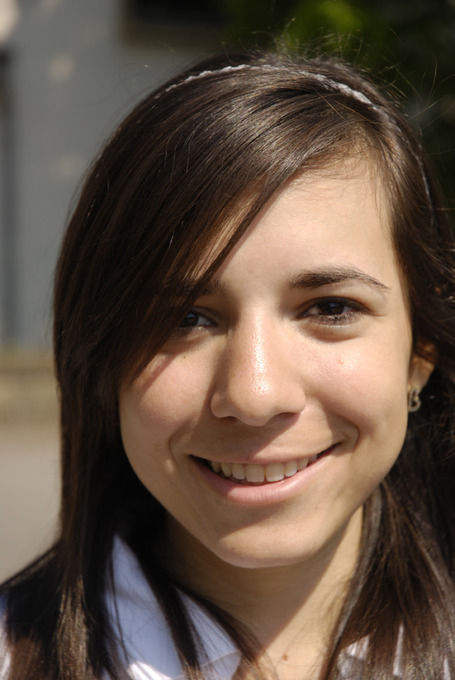 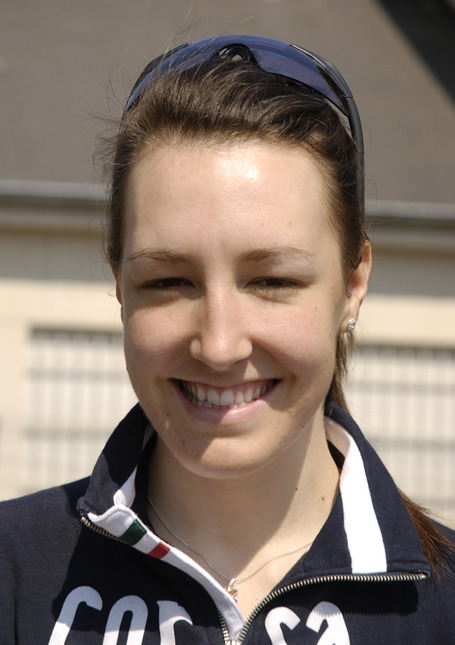 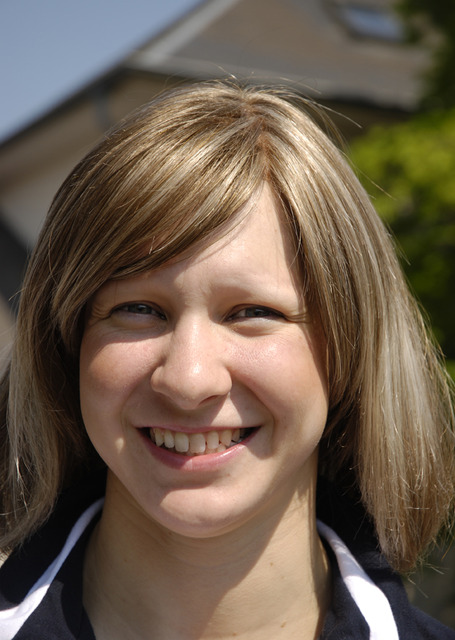 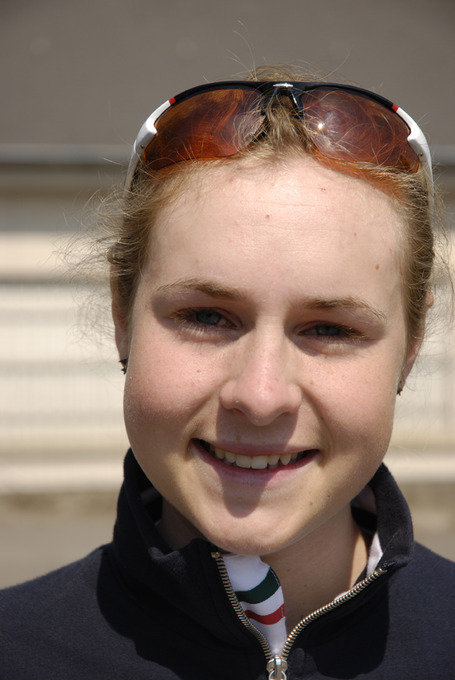 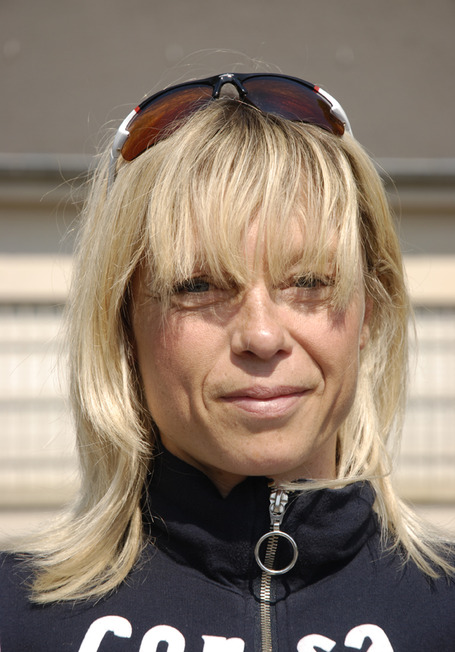 And some Garmin-Cervélo riders: Iris Slappendel, Sharon Laws and Lizzie Armitstead (Lizzie wasn't riding, after illness made her pull out of the GP Elsy Jacobs) 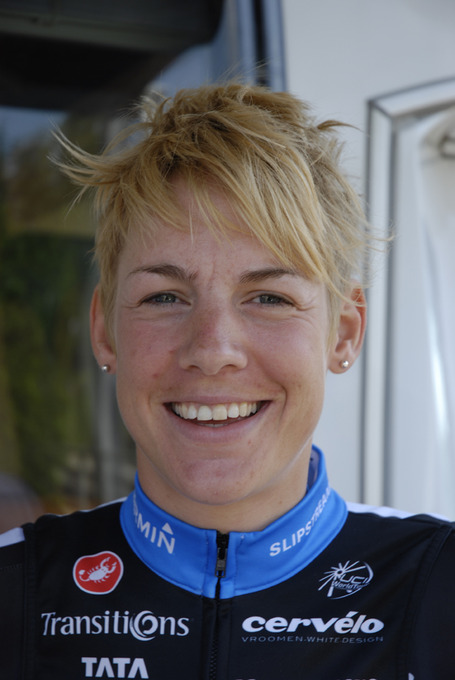 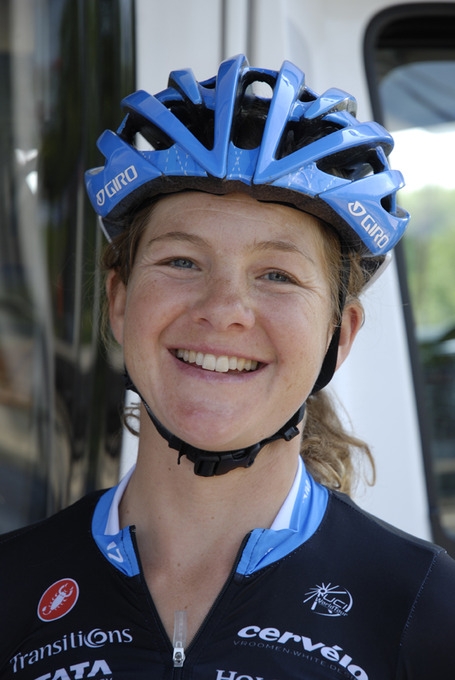 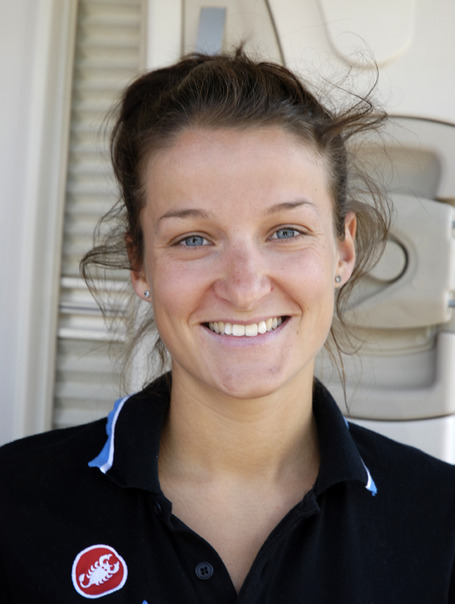 I also took advantage of the fact that the DSs had to hang around for a lot longer time before the races than the riders do. And it turns out that there's a limit to the amount of coffee that even a DS can drink - and that they are just as lovely as the riders are. These three interviews were all on the morning before the GP Nicolas Frantz.

Here's Nederland Bloeit's DS, Jeroen Blijlevens, talking about the plans for the team, what it feels like to be the DS of a team where every rider won a race last year, and has the current number 1 and 2 in the Road World Cup:

Here's HTC-Highroad's Ronny Lauke, on how the women's team fits with the men's team, how it feels winning the City Trophy Elsy Jacobs Team Time Trial, and more

And here's a double act from Horizon's own DS, Stefan Wyman, and Ronny Couliez, former cyclocross rider and "the best mechanic in the world". The voice in the background with all the big talk about her planned Koppenberg downhill race? Helen Wyman. Of course! She deserves a prize for heckling, but she's always amusing - I think she owes it to us to show us photos of that race when it runs, put her money where her mouth is!

Finally, here's Martin Barras, the DS of the Jayco/AIS Team Australia, who I spoke to before the City Trophy Elsy Jacobs TTT. I interviewed him, mentioning Podium Café, and Team Australia went on to be first in the rankings of the TTT all night, only beaten by the last team on the road, HTC-Highroad..... coincidence? Or the famous PdC effect? I'll leave it to you to make up your own minds!

I had the best time in Luxembourg, and my huge thanks to Stef and to all the Horizon team for looking after me, giving me a great insight into the racing, and introducing me to so many people. Of course, massive thanks to all the riders and team staff who let me take their photos, interview them, and to all the riders and teams who gave me prizes for the Virtual Directeur Sportif competition. I really miss my little window into the women's cycling world, but Horizon
have already offered to let me come with them again - and of course, if any teams are going to the Giro Donne or the RaboSter, and want their very own fangirl tagging along.... I'm sure I wouldn't say no! 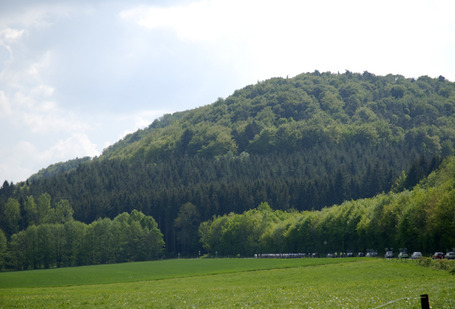 Photos and videos all owned by and copyright Sarah Connolly. Words are mine too!