Share All sharing options for: Giro d'Italia: Cast of Characters 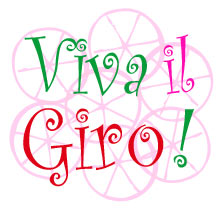 It’s Giro time! Really, why does the rest of the year have to last so long? There should be a law. But finally, we have Giro, the very bestest time of the whole year, except for a few other parts I could mention, but I won’t, so you shouldn’t either.

I can never quite decide what gives the Giro so much awesomeness. Is it the Italy? The mountains? The cast of characters? I’m guessing some combination of all of the above and always there is drama and plot twists and polemica. I confess, I especially like the polemica. It’s best served hot with a nice bottle of Chianti, or if you’re living large, try the Amarone. I guarantee you will not be disappointed.

So let’s see who might be showing up to this party in Italy, shall we? Before the play begins, I always like to peruse the cast of characters. Or, if you're feeling fancy, the dramatis personae, who inevitably exeunt shouting. I would never want to mistake the villain for the hero and root for the wrong dude to win the beautiful lady. There are a few rules I try to obey most of the time. This, my friends, is one of them.

Let’s start with the favorites for the Pink Shirt, shall we? Alberto Contador, favorite numero uno. Doping, shmoping, that’s what Contador is saying right now. And since his team and the race organizers and the suits are saying the same thing, why shouldn’t he? Contador may get the banhammer in June, so he’d better win while he can. He’s also won like a gazillion grand tours already. So I see no reason why he can’t win another, do you?

Vincenzo Nibali over at Liquigas-Cannondale begs to differ. And really the Shark from Sicilia... Come on, say it, say it fast. It’s so sharky with sibillance. Anywho, this Nibali guy, he rode for Ivan Basso last year and never did pull out the stiletto. He later won the Vuelta a España and he has a rather formidable team at his disposal. Agnoli and Szmyd, there’s nothing not to like about those guys in the high mountains. If you have to ride the Marmolata and the Giau and all those other nasty pointy things, you really want guys like Agnoli and Szmyd along to help out. Lucky dude, that Nibali.

Roman Kreuziger used to ride with Nibali. Now, he races for Astana. He didn’t seem to quite know what to say when the interviewers asked him during the teams presentation how he felt about racing against Nibali. I’ll do my best? And try to win? Good answer, Roman. Me, I’m not convinced Kreuziger quite has the climbing legs for this Giro, but I’ve been totally wrong before. Come on, Roman, surprise me.

Michele Scarponi, as a grand tour winner. I’m just not quite seeing it. But, everyone is calling him a favorite, so I guess I should do it too. With conviction? Not so much. But he’ll be there and he has a nice smile. So you know, there’s that.

On the subject of Lampre, could Alessandro Petacchi have looked any more hangdog at Friday’s team presentation? Well, you’d be sad too if you were a sprinter facing so very many mountains. Have fun storming the castle and all.

Since I’ve already seen it once, I can easily imagine Denis Menchov as a grand tour winner. But on this course with all those murderous mountains, it might be rather difficult for the Russian to make a repeat. Carlos Sastre joins him at Geox and will enjoy the mountains considerably more. I’m not falling into the Carlos as general classification pick trap, but don’t think I’m not hoping he pulls out some kind of miracle ride. Don’t rush the miracle man. You get crappy miracles.

It wouldn’t be the Giro without Stefano Garzelli, he of the amazingly shiny head and remarkably long eyelashes. Is he an alien? Entirely possible. The Giro lurves Garzelli. He will do lots of interviews, ride some breakaways in the mountains, and maybe take home a stage victory. Otherwise, his job is to smile pretty for the cameras and remind everyone that he rode with Marco Pantani. Not a bad gig, if you can get it.

It also wouldn’t be the Giro without the Team of Many Names. Androni-Giocattoli. What? That’s it? Total let-down. Team manager Gianni Savio said Friday during the team presentation that they would ride an aggressive race in search of stage victories. Seeellllllaaaaa! Yes, he’s back from doping suspension. Look ma, no drugs! Which may also mean, look ma, no wins! José Serpa is tiny enough that the sponsors barely fit on his jersey. Serpa, he likes mountains. Breakaway duty for you José.

Another essential ingredient to the Giro: Colnago-CSF. They’re the team who goes out early and livens things up. One of their riders, I’m forgetting his name, took a lovely stage win last year. It was his first ever and it came in his home town. Hello! Storybook! Pozzovivo, maybe he has a Pink Shirt run in him, but color me skeptical.

David Arroyo returns after last year’s podium finish and truly valiant defense of the maglia rosa. Will i bigs give him an early twelve minute lead? Doubtful. I really just want to watch Arroyo descend again. Could that Mortirolo drop last year have been any more awesome? I can’t imagine how. So if he could please attack on a mountain stage and go screaming down a descent at some point during this Giro, I would be very happy. Because you know, it’s all about my needs.

Joaquím Rodríguez feels like a stage chaser to me. But! He could ride for the General! You never know! I do wonder how long he can hold the run of form he had in the Ardennes. Perhaps an early stage victory might be a good plan? That steep finish in Orvieto might suit him nicelike.

What? I haven’t mentioned the Italian National Champion? It just doesn’t seem right that last year’s tricolore Filippo Pozzato will not attend this year’s Giro. No Hairclub? I’m not sure I can go on. But don’t be sad! Because Giovanni Visconti, the current Italian National Champion, will be at this Giro. And he is rather charming. He’ll show the flag in the breakaways and hope to snag a stage win. It’s rough being the guy everyone thought was going to be the next Paolo Bettini. Visconti, he’s tranquilo. Not a big winner, but gets his share, and a Giro stage would be lovely.

We have to give a loopy shout-out to Pete Stetina and his Garmin-Cervélo dudes. They’re stage-hunting and hoping to win the team time trial. David Millar, in the house! As his time allows, Pete is stopping by to share the insider news from his very first grand tour. If you haven't done it yet, go read Pete's first diary. In boca al lupo, Pete!

Garmin-Cervélo will face a formidable rival in HTC-Highroad for the opening stage victory. Among other things, they are bringing one of my very favorite riders Marco Pinotti. If you haven’t read the interview Pinotti did with NY Velocity, go do it. Do it now. It’s beautiful.

One last special shout-out to Richie Porte, who rides this Giro d’Italia for Saxo Bank. He gave Tifosa his podium flowers last year which was so awwwww. The smiley Tasmanian also won the Best Young Rider jersey last year.

Viva il Giro! Three weeks of joy, and it all starts tomorrow with a team time trial with some very crashy corners. You must stay upright to win. Let's go!