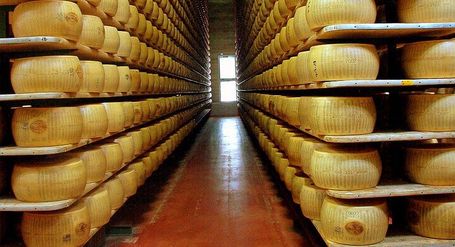 Nom nom nom... I can't wait for the processo, and chances are neither can the riders. Today is a Big Media Day for the Giro, the first road stage, and there is absolutely no chance that the host city for the finish will pass on the opportunity to remind the world what they have to offer. The only question... do they go with parmesan cheese or prosciutto? Right now it's a mystery, but the sprinters' teams will be licking their chops in anticipation Sunday.

Pretty straightforward day. The map (on the flip) doesn't betray any late twists and turns, and if I'm reading the cronotabella (timetable) right, the last 2.1km are straight into Parma. No breakaways, hopefully no crashes (though see yesterday's warning about tram tracks in urban areas). Just a big, fast power finish.

Stage Battle: This will be one of the biggest stage battles of the entire Giro. The sprinters won't get many better chances, and there is always more adrenaline on opening weekend than, say, stage 10. This is as big as it gets for guys like Mark Cavendish (HTC), Tyler Farrar (Garmin), Alessandro Petacchi (Lampre), Francesco Chicchi (Quick Step), Francisco Ventoso (Movistar), Graeme Brown (Rabobank), Robbie McEwen (Shack), and Borut Bozic (Vacansoleil). On a big boulevard, leadouts will be all the rage. The gap is narrowing, but until further notice nobody does it better than HTC and Cav.

Maglia Rosa Matters: As long as nobody is foolish enough to get in the way of the sprinters, this stage has zero significance to the overall.

Cue Opera for: The early breakaway riders. There's a funny dynamic of hope among these guys, funny in the sense that when you hear them talk it sounds like they really believe they have a chance, whereas the rest of the world is thinking no freakin way. Today? No freakin way. 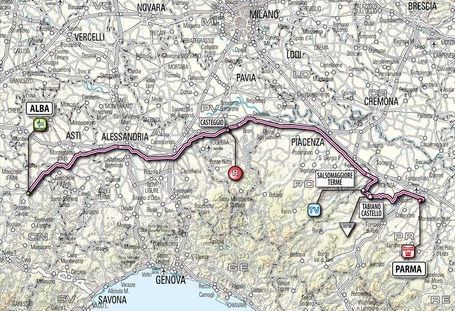