Giro Stage 2: Petacchi By a Tire

Share All sharing options for: Giro Stage 2: Petacchi By a Tire

Lampre's Alessandro Petacchi, the winningest active Giro rider, won his 22nd career stage of the Giro d'Italia in the longest stage of this year's race. The stage, always destined for a sprint finish, ended in a long, flat, straight run-in to Alba, and Petacchi jousted with HTC's Mark Cavendish in the last 250 meters before nipping the Manxman by a tire width. Cavendish complained bitterly that Petacchi illegally veered off his line to interfere with Cavendish's sprint, but there was no relegation for the big Tuscan.

A brave group of eight riders escaped with 20km to go, but the pack closed in when Katusha's Eduard Vorganov got dumped on the road by a wheel touch. Sebastian Lang of Omega Pharma was the lone breakaway dude, spending much of the GIro's longest stage alone until the utter misery of this effort overwhelmed him on the day's lone climb, the Tabiano Castello, seemed to sap his will.

The last 5km weren't marked by any great control by any team, as all the big favorites tended to be down to a couple guys, until 1.5km to go when Garmin put four men on the front. But Lampre joined them on their right with 700 meters to go and in the subsequent jumble it was Petacch who sealed the deal. 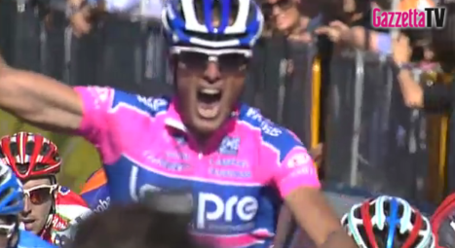