This is the first stage which raises the possibility of the attackers outdueling the sprinters... but it's tough to predict. The stage is vaguely reminiscent of a chunk of Milano-Sanremo, cresting the coastal rise from the lower inland of Emilia , then dropping down along the Tirrhenian Sea for finish that crests a short climb along the rugged coastal roads before bombing down to a city finish. The question isn't whether the day's highest climb, the Passo del Bocco, will bother anyone anymore than the Passo Turchino upsets La Primavera; it's whether the Madonna delle Grazie, cresting nine km from the line, can be the Poggio.

La Madonna crests out at about 200 meters, but the final 9km to the line are a jumble of descents, short rises, and twisting roads. So while the 6.4% average of the Madonna might not hurt anyone, it will be very difficult for the big sprint teams to get organized the way they prefer. See profiles and special effects video and photo tours, courtesy of cyclingthealps.com, on the flip!

Stage Battle: Attackers may have their day, but if the fastmen come back, look for guys who've enjoyed MSR. Past winners include Mark Cavendish and Alessandro Petacchi, while Colnago's Sascha Modolo has a high finish. Tyler Farrar hasn't enjoyed la Primavera much.

Maglia Rosa Matters: The jersey will be up for grabs, although Cavendish is pretty crafty and would have to lose a pretty large amount of time to surrender it. The big GC names won't get involved.

Cue Opera for: Bunch sprinters who like a nice calm finish. Not gonna happen.

Deets on the flip... 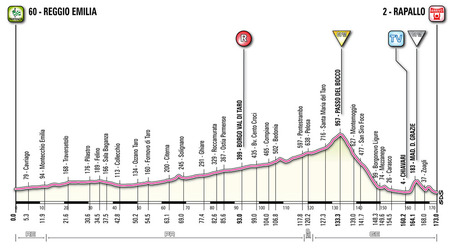 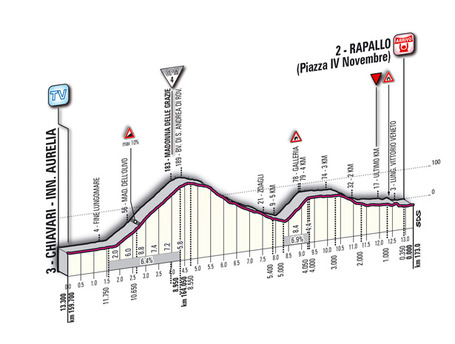 Video tour of the Madonna