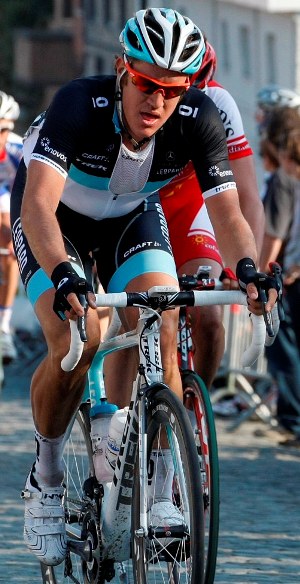 Leopard-Trek's Wouter Weylandt died in today's third stage of the Giro d'Italia in a crash on a hairpin turn descending the Passo del Bocco. The crash was not captured on film and its causes aren't clear (reports are he clipped a pedal on the road or the wall), but Weylandt's head struck a retaining wall on the hairpin bend and he reportedly died of a fractured skull. Efforts to revive him were complicated by the location's inaccessibility to helicopters, though descriptions of the crash and injuries suggest that there was never much hope of surviving. A native of Gent, Belgium, Weylandt was 26 years old and is survived by his wife who is expecting the couple's first child in September.

Obviously, Weylandt's loss is first a tragedy to his family and friends. It would be impossible for me to find adequate words to capture this. I think I speak for many of us in saying they will be in our thoughts.

Today's stage was won in a five-rider sprint by Angel Vicioso of the Androni Giocattoli team over David Millar of Garmin-Cervelo, who inherits the overall lead by seven seconds. The stage was contested to the finish, it appears, as information concerning Weylandt's condition was not available and his death was not publicly confirmed until his family could be contacted, which happened after the stage. Reports are that tomorrow's stage will be neutralized in honor of Weylandt. His Leopard-Trek teammates will not likely continue in the race, though for now no announcement has been made.

This is a horrible loss even to a sport accustomed to tragedy. Unlike a lot of other team sports, the nature of cycling where riders of all teams work and travel in close quarters (to say the least) means that everyone knows everyone else, and close friendships across team lines are the norm. [Tyler Farrar called Weylandt his best friend recently.] Weylandt's death will impact the sport in ways less familiar in other sporting contexts. This dynamic is set against a backdrop of what R Mc commented below as "riding the wall of death every day" -- a poignant description of the terrible risks that are "accepted" as part of the sport. I say "accepted" because this incident will no doubt touch off debate about what constitutes safe conditions, a legitimate concern even before today. However, while riders will cite some courses for unsafe conditions, tragic and near-tragic crashes occur on courses that don't appear abnormally dangerous. Some amount of grave risk accompanies cycling wherever it goes. We all know that, even if you've never watched a single race.

Today, though, the sport has veered across the line of what anyone -- riders, teams, organizers and fans -- is prepared to accept as "that's cycling." People who shake off the horror and brutality of the sport when it seems so hard to do will undoubtedly be struck differently by this. It is hard to predict what this will mean for the Giro going forward, and the loss of a bright young sprinter -- husband, father-to-be, family member, friend -- will forever stain the race and the cycling season with tears. [/Chris]

The Leopard-Trek Team has issued a brief statement:

Today, our team mate and friend Wouter Weylandt passed away after a crash on the 3rd stage of the Giro d’Italia.

The team is left in a state of shock and sadness and we send all our thoughts and deepest condolences to the family and friends of Wouter.

This is a difficult day for cycling and for our team, and we should all seek support and strength in the people close to us.