Remember when they flattened the Tour de Suisse to "allegedly" help Fabian Cancellara win?  Well, that was then.  And mountains are now.  The 2011 Tour de Suisse route is truly beautiful, occasionally very high, and at times quite difficult. 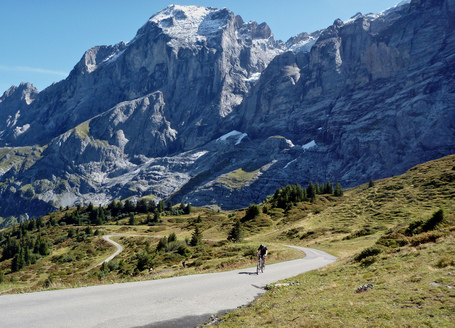 It's a hugely talented field.  Most top riders that are not in the Dauphiné will be in the Tour de Suisse. Including defending champion Frank Schleck, his skinnier brother Andy, Cancellara, Cavendish, Hushovd, etc. etc.

After the jump:  a quick video previewing the course.  And then a closer look at the biggest climbs.  As usual, please use the comments for VDS smack talk.

The chart below rates the difficulty of the biggest mountains in the Tour de Suisse.

As usual, to rank the climbs, I will be using the www.climbbybike.com difficulty index that we used for the 2010 Tour  (we ranked the top 25 climbs - see here).

Note:  If you are interested in calculation methodology, see the above link for more on the difficulty index.  But in brief, the formula results in an arbitrary difficulty rating - by taking into account length, ascent, and altitude - that can then be used to contrast and compare with other climbs.

In the chart below I have listed the biggest climbs in the Tour de Suisse, the Dauphiné (all this weekend!), and - for comparison - Alpe d'Huez.

For a one week Tour, TdS is full of huge climbs - it goes higher than the Giro and is a lot harder than the Dauphiné.  I don't know Malbun (it's supposed to be great) - but Grosse Scheidegg, Nufenen, Grimsel, and Fluela aren't just challenging - they are really beautiful.  Yes, I am looking forward to this race. 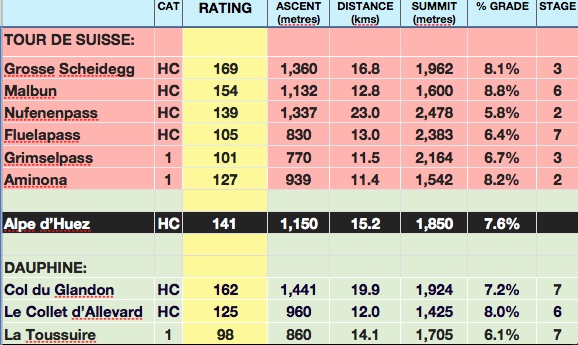 Nufenenpass is a little early in stage 2 to be decisive, but it is close to being the highest paved pass in Switzerland - the descent side is an even harder climb.  The summit is on the border of German/Italian speaking Switzerland.  It's called "Passo della Novena" in Italian.

I am going to spend a little more time previewing Stage 3 because it's the most excited I have been about a stage in any race in years.  When I first heard that Grosse Scheidegg would be in the TdS, I was shocked, but also very excited.

The TdS received special permission to use this climb in the stunningly scenic (UNESCO world heritage area) Berner Oberland region.   It is steep, narrow, and has views of some of the highest mountains in Europe - including the legendary Eiger north face.  It's about as beautiful a place as I know.  The mountain biking here is as good as it gets.

A little more on the stage: 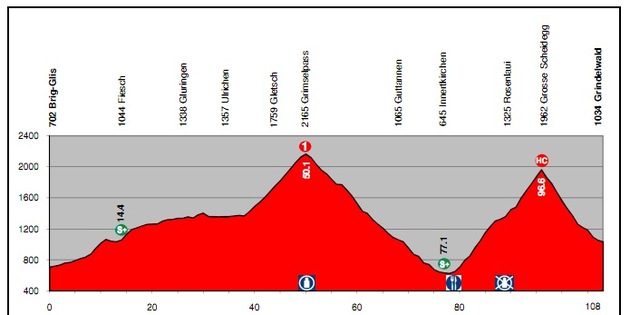 The stage starts in Brig (not too far from the Matterhorn) and gently climbs through the Valais/Wallis valley.  Roughly 70 kms before the finish, the route turns up towards both the Furkapass (see the 2nd James Bond film) and the Grimselpass.

This is the "easier" side of Grimselpass - but the last few kilometres are on some of the coolest hairpins  in cycling (Grimsel route below, Furka in distance): 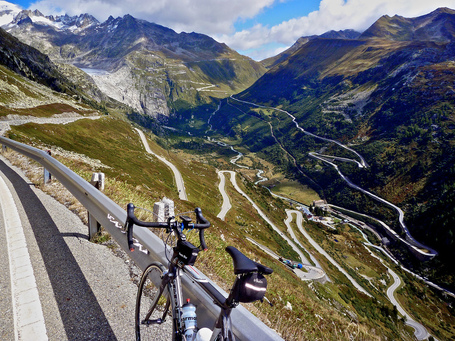 The route will then descend the harder side of Grimsel, first passing several huge dams / alpine lakes: 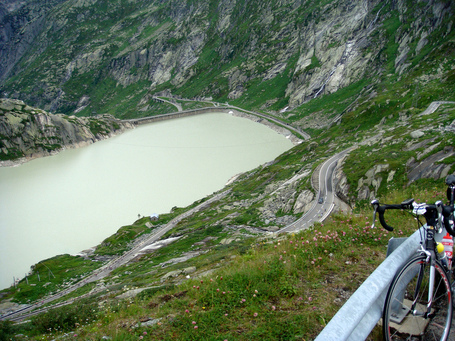 After a 27 kilometre descent (fast - not technical at all after the higher hairpins) they will approach Meiringen and the start of the climb to Grosse Scheidegg (translation:  large watershed?).

The early slopes pass the Reichenbach falls where Sherlock Holmes was thought to have plunged to his death along with the evil Vaughters Moriarty. 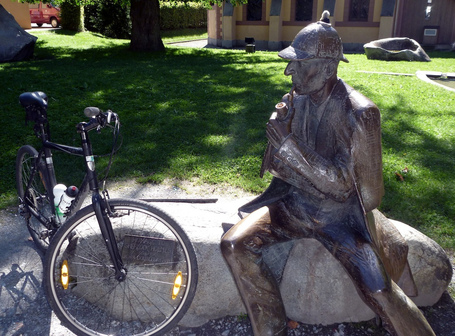 This is a great, great climb.  A very steep, narrow road and alps everywhere. 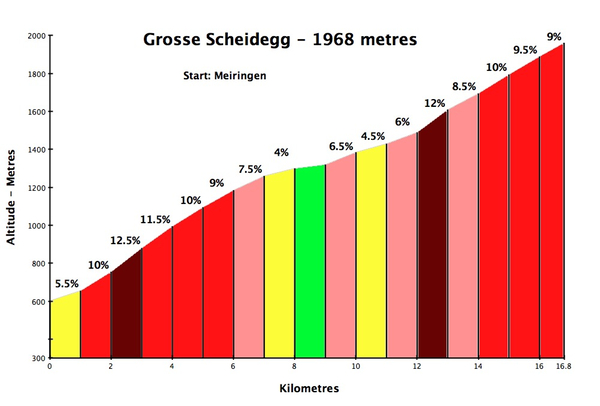 After the flattish part in the middle, the climb is usually closed to cars (on both sides of summit).  Although public transport buses fly up and down these stretches.  It becomes a narrow well paved single lane - and the views just keep getting better. 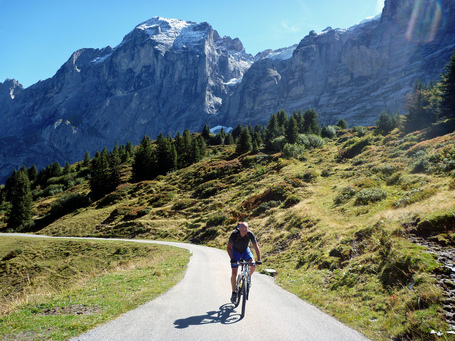 When I first heard that this climb would be in the TdS, I assumed it had to be a finish at the top (to be clear, I would have greatly preferred this).  As the other side is equally steep and narrow. Here's the profile (The TdS will be descending here of course):  This will be a crazy finish to Grindelwald below. 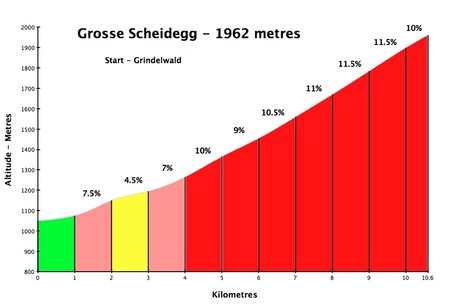 But the profile doesn't tell the whole story.  Again, it's a narrow, single lane road, with some crazy, blind hairpins.

This is painted on the road in a couple of places (bus horns frequently disturb this beautiful sanctuary): 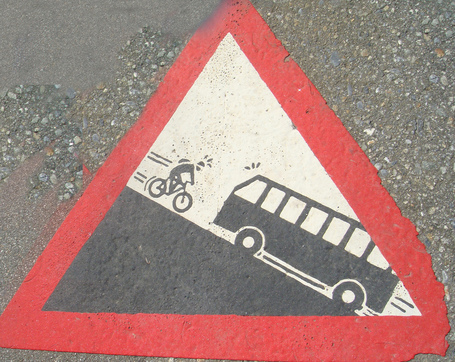 Still, for cyclo-touring, it is as beautiful as it gets.  With the Eiger north face in view: 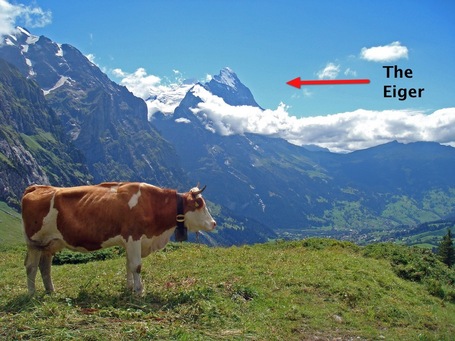 The North Face of the Eiger was the last great mountain climb to be conquered in Europe.  After many deaths/failures it was first climbed in 1938 by Brad Pitt  Heinrich Harrer (and 3 others).  It is one of the most difficult mountaineering challenges in the world (see Clint Eastwood in The Eiger Sanction).  Want a good book?  The White Spider by Pitt Harrer detailing the 1st successful ascent is brilliant.

(Pitt portrayed Harrer in the film 7 Years In Tibet).

This cycling climb to Grosse Scheidegg is hard - really hard.  But there are sprinting stages afterwards.  So I assume we will hear lots of stories of riders getting pushes right about here: 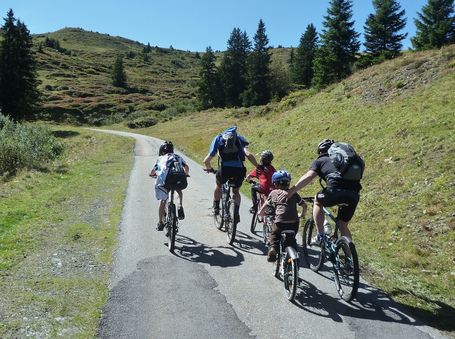 In Summary?  I am thrilled that this Shrangri-la is in a cycling race.  And just hopeful that the peloton can safely manage the final descent.

PS - My annual rant:  I think it's in part due to the Tour de Romandie covering the region - but again the Tour de Suisse ignores French-speaking Switzerland.  Only the end of the Crans-Montana stage passes into the Romandie region.  Meuh.

My pick?  I don't know, but I promise you it won't be Mr. Cancellara.