When I said my first ever in-real-life cycling race was in Luxembourg, Stef Wyman, Café contributor and DS of the Horizon Fitness Racing Team, told me I had to come to Stoke-on-Trent to see how the women race in the UK, and to hang out with the team as they spent a day doing promotional fun with schoolkids and sponsors.  So I hopped on a train, headed north, and had a lot of fun seeing what life was like behind the scenes with the team.  Photos below the jump! 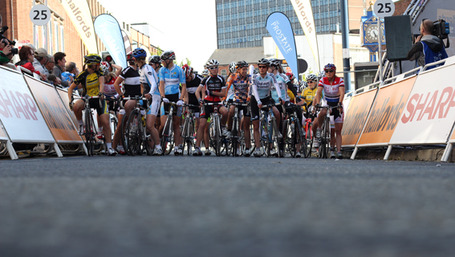 The Johnson Health Tech GP series is new this year - 4 races alongside the men's Halford's Tour Series.  They're City Centre Crits, and in Stoke, the route ran round the main shopping centre, including down the big shopping street. 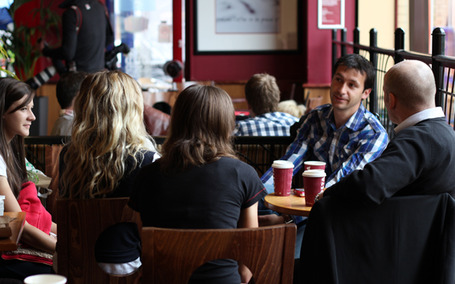 Half the team - Hannah Rich, Penny Rowson, Annie Simpson and Helen Wyman (Helen rides for Kona for the race series, but except for in the actual racing, she counts as one of the team) - had gathered in a hotel in Stoke the night before the race, as it was an early start for them - meeting groups of kids from local cycling clubs for breakfast, and having various photo opportunities.   The race had taken over a coffee shop as the morning HQ - full of bits of media, photographers, kids, race officials and people like me, looking for a coffee.  The Horizons segued neatly from chatting with the kids to meeting with the sponsors.  Johnson Health Tech had a dual role in the race - they are the main sponsors of Horizon and also are sponsoring the whole women's racing series - and being based in Stoke, this meant Horizon were very much the local team. 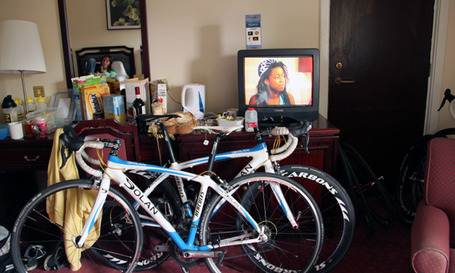 After the meetings, it was back to the hotel room for rest and relaxation, among the bikes, kit and breakfast paraphernalia - Helen had been dispatched to get healthy breakfast food the night before, as it turns out that the ideal race preparation is NOT a full English cooked breakfast!  It was a very chilled room of gossip, wifi happiness and helping Penny understand the mysteries of Twitter for an hour, before heading off to the local theatre, to meet and greet with about 10 local primary schools. 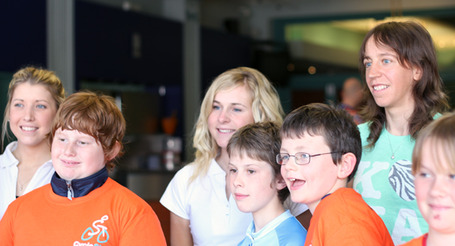 The schoolkids had been invited for a day of cycling fun - they got to ride the course, and there were displays of BMX trickery and other bike-style entertainments - and they all got medals, t-shirts and slap-on reflector bands. 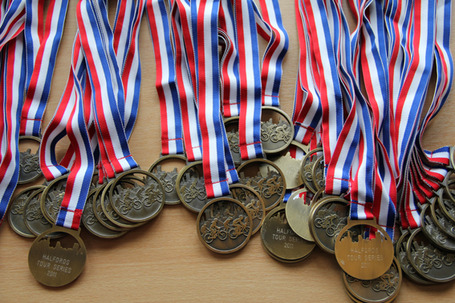 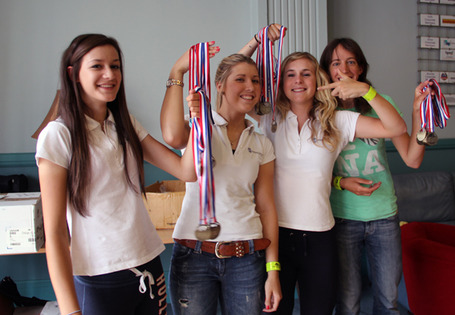 The kids especially loved the slap-on bands, as you can imagine - the room was full of the sound of them...  with Helen enthusiastically demonstrating them to anyone who came close! It was one of those long, chaotic, fun sessions, with the riders signing everything put in front of them, including the small kids.... 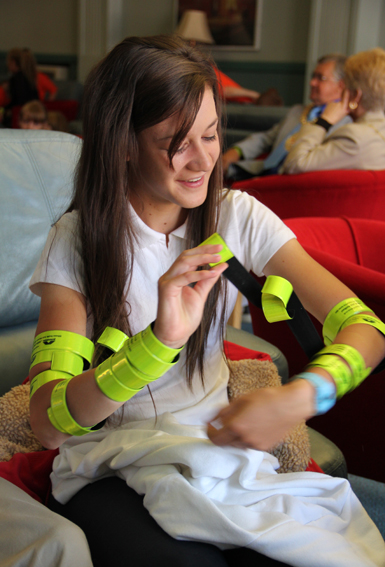 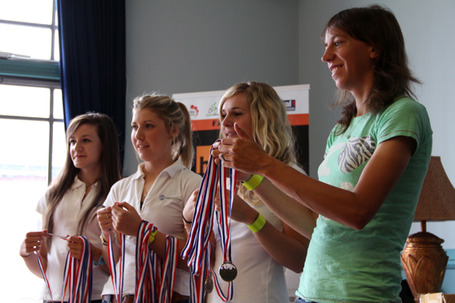 For their next stop, the team had a date with a local radio station, hanging out on their stand in the city and being interviewed.  Bless 'em, some of the team hadn't quite got the hang of radio (apparently describing exercise as "you do it like this!" wasn't especially helpful) - but they ticked it off the list, and then it was on for lunch.  Dani King and Jo Rowsell had missed the morning, as they were both in the middle of a block of serious track training - Dani is a member of the current World Champion Team Pursuit Team, Jo was a TP World Champ in both 2008 and 2009, but they still need to work hard for the three precious spots on the Olympic track team.  They were on the track in the morning for hard training, then made it through the rain and the traffic for lunch.  Pasta all round, then it was back to the hotel room, which was slightly more crowded, for digestion, internet and preparation. 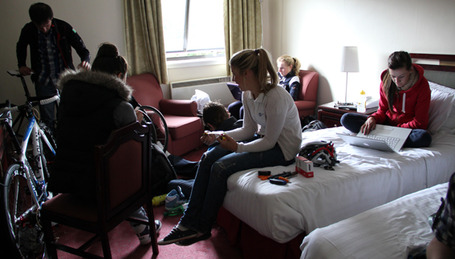 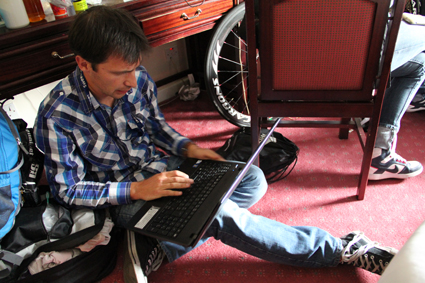 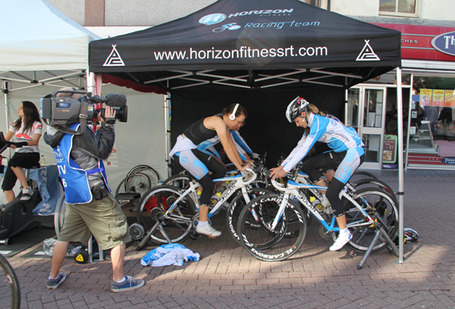 Stef went back early to get all the turbos set up.  The race centre was three miles away, but Stef cares about his riders (and likes to put on a show!) and had set up the tent with the bikes near the start-and-finish line, next to the Johnson's tent - and it was great for the public to get to see the riders warming up - and it gave the roving camera crews something to film as well! It seemed to make life a lot easier for the team, too - having a base, while the other riders had to hang about on the street.  The team had had to ride out and back to a pre-race meeting at the race centre, so they had a bit of a warm-up before the team presentation...   and lining up to start. 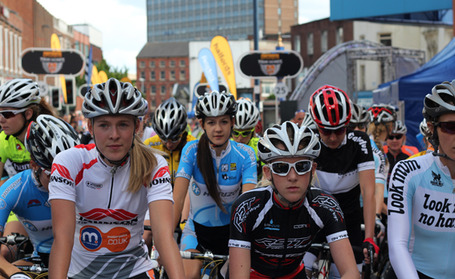 The race was 30 minutes, then 5 laps.  It's one of those courses with a hill that seems to go on forever - not too steep, but endless - and the descent is twisty, so no time to relax.  In the first race, Peterborough, Motorpoint had been the dominant team, with Hannah Barnes and Lucy Garner finishing first and third, with Helen, for Kona, in second.  This time, Horizon had a clear plan - joking about how they could take the entire podium this time around.  Their strategy was for Hannah Rich to go for the mid-race sprint points, and then, just after the sprint, attack when no one was expecting it, and try and get Dani into a break.  It sounded perfect round the table at lunch, but would it work? 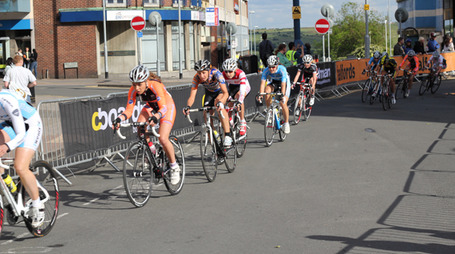 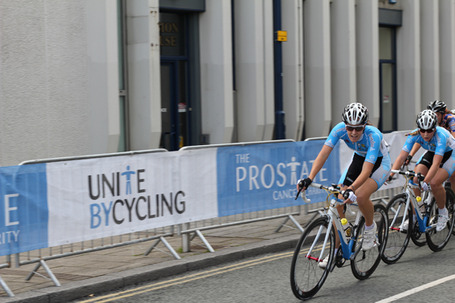 Annie Simpson hit the front from the start, and hammered around the first few laps, shedding riders almost immediately, and from then on, the plan went like clockwork.  In every lap, there was the blue of Horizon at the front, the team working SO well together...  Hannah won the points, as planned, taking her into the overall sprint leader of the series... and then Dani just took off by herself. 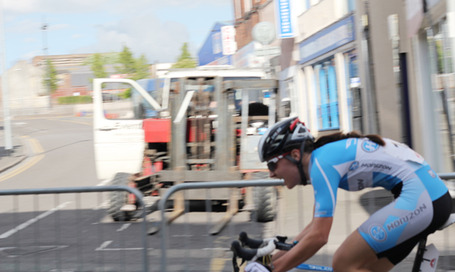 Once she'd gone, that was it - with e 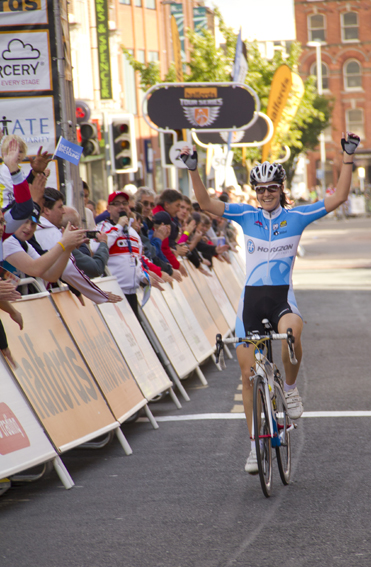 very lap, her lead got bigger and bigger - and then Helen decided to have a go too, and chased her, solo until she picked up a small bunch of lapped girls.  Dani was untouchable, though, and won by a long way, making it look easy! Helen came in second, hidden by some of the riders who unaccountably sprinted against her for the line (I think they'd forgotten they had another lap to go?) - and the rest of the Horizon riders came in in a small bunch, Annie and Penny leading out Hannah and Jo to win the sprint for third and fourth place.

Spectacular results for the team!  By the time they came back round together, they were all smiles - they'd won the race, Helen had moved into the Series lead, Hannah had won the sprints, and it was pretty clear they'd taken the team prize too, even though "it had to be calculated"! 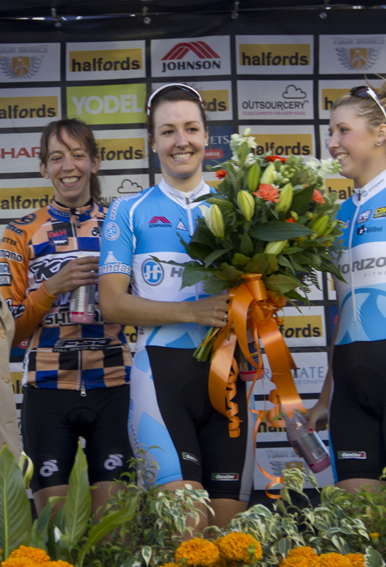 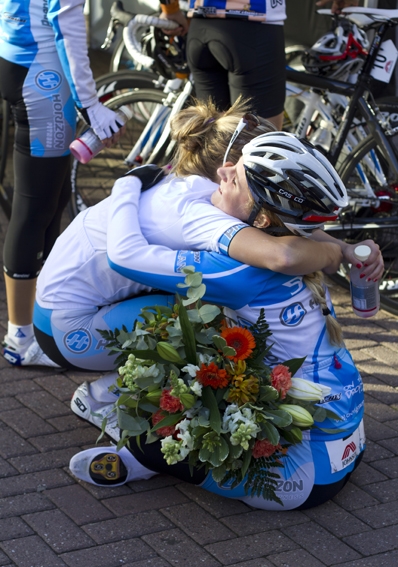 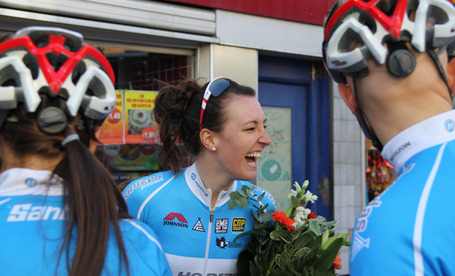 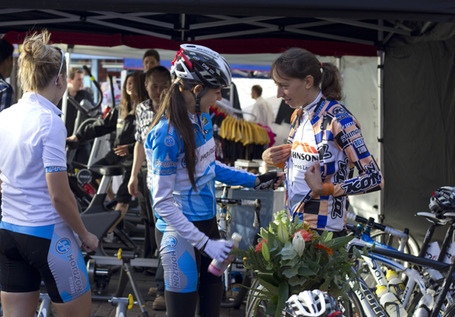 Happiness!  After the podium, it was back to the tent to dissect the race, thank and congratulate each other, then on to the hotel to shower, change and disperse across the country. 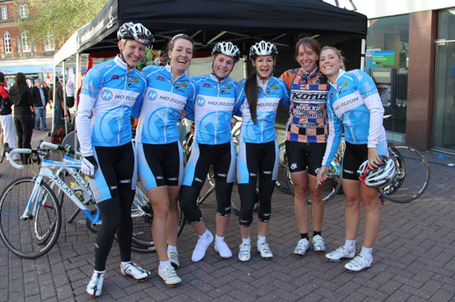 Stoke was raced on the Monday, and the team went on to ride (and Annie to win!) again at Oldham on the Thursday (see Bart Hazen's race report and photos on the Daily Peloton) - and the final race in the women's series is at Woking, tomorrow, 14th June.  Will Horizon be able to continue their winning ways?  Will Helen take the Series overall for Kona?  We'll have to wait and see!

Race report and photos by Sarah Connolly; all photos copyright.
For more of my photos from Stoke, see the photoblog on Horizon's website