Share All sharing options for: One Less Rainbow Curse 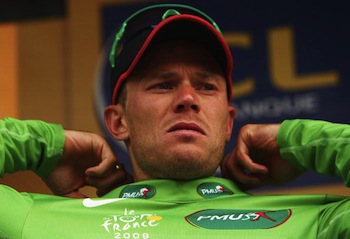 Thor Hushovd's victory today in stage 3 of the Tour de Suisse marked the first chance for the Norwegian to raise his arms and show off his lovely prize from Geelong last fall. Hushovd's travails could easily invoke talk of a "rainbow curse" since we have that conversation on an annual basis, but all things considered Thor's jersey defense is shaping up just fine. First, let's look at just how low the bar is for World Champions these days:

So where does Hushovd's rainbow campaign stack up? Let's rank the others first:

Right now Thor is in Vainsteins territory, but seeing as how he's peaking for the Tour, and he has a Scandinavian worlds coming up later, he could move up several places on this list before he's done.