It's such an exciting weekend of women's racing - Giro del Trentino in Italy for the climbers, the Nature Valley Grand Prix in the USA and last, but not least, the RaboSter Zeeuwsche Eilanden.  If I told you it was a 100% flat race, you might get the wrong impression, and think it's not worth following - but while it is very flat, as all three stages take place on islands reclaimed from the sea by the clever Dutch, the riders have to contend with wind, cobbles, sea-front, sand-blasting, weather....  and with the endless attacks of Dutch-style racing, it's probably only fair that they don't have climbing as well!

This is a very special race, in a beautiful coastal setting, with some of the best race coverage we get - live tickers, and last year, tv coverage of 2 stages.  Have a look at Stage 3 from last year's race, and then follow me below the jump for what's in store this year!  And want to know how to pronounce the race name?  tedvdw tells us how!

This race has a fantastic website, and on each stage page, they link to the route via googlemaps, so you can get a really good view of where they're riding, which is especially useful, as this looks like a very pretty part of the world.  It's the most south-western part of the Netherlands, and very tourist-friendly.  If I'm sounding a little bit hyperbolic about this race, it's because anything that combines the sea, history and a huge love of cycling makes me happy - NEXT year I'm DEFINITELY going to go!  For a race that takes place in such a small geographical area, it's also fun to see how they vary the course from year to year.  Sadly we won't have the long bridge & dam sections of last year (SO beautiful!) but there's still a challenging parcours to make up for it.

The race starts with a 5km ITT.  In previous years it has run along the sea-front at Vlissingen, but this year it moves to Middelburg, the capital of Zeeland province.  You might recognise it, as it uses the same finish line as the Amsterdam-Middelburg stage of the 2010 Giro.  Middelburg dates from the 8th Century, and from Viking raids, to the 80 Years War to the bombs of the Luftwaffe (and the bombs of the Allies liberating the Netherlands) the town has faced a lot in its history. 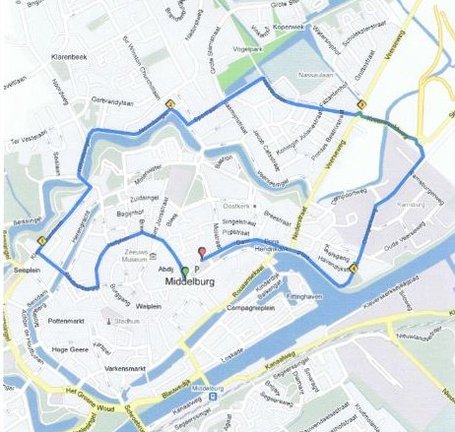 The Time Trial starts at 18:30, with the last rider expected to finish at 22:15 - it'll start to be getting dark by then, so it'll be interesting to see the order teams choose to send their riders in.  My bet?  Watch out for AA Drink's Kirsten Wild, these short TTs are perfect for her.

Given that the area is so flat, time bonifications will play a big part in the GC.  At each intermediate sprint point, the first three riders across the line get bonis of 3, 2 and 1 seconds, and the first three to finish the race get 10, 6 and 4 seconds. 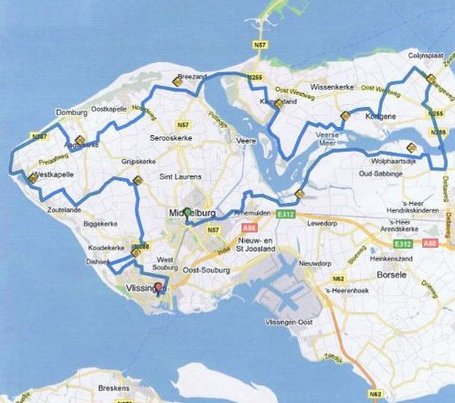 This is almost the same route as stage two last year, with a little less sea-front riding, maybe.  It starts after working hours, again, at 18:30, and is expected to end at 21:45.  The flat farmland, sections along waterworks, and especially the seaside sections guarantee winds.  From what I can tell, there are some cobbled parts as well, and one or two technical-looking corners.  I'm putting my money on Nederland Bloeit to use the wind for echelon fun, and make it a hard race.

Westkapelle is a small seaside town on the tip of the island.  You can read some of its history - especially the history form WWII, on the wikipedia page - it was bombed by the Allied Forces, breaching the dykes, as a precursor to the liberation of the Netherlands. 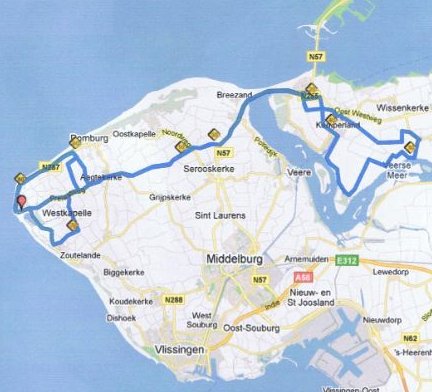 The route runs out and back in a large loop, then finishes with four shorter laps along the coast (you can see this part in the video upthread - it has a nasty little climb up onto the seawall, where IIRC riders attacked last year.  The weather will play a huge part - and last year, this stage was non-stop attacks.  As it's Saturday, this stage is a daytime race, starting at noon.

So who will be riding?

The climbing teams will be in Italy, but the Dutch teams are out in force!  Nederland Bloeit will be THE team to watch - although Marianne Vos is not on the startlist, Omroep Zeeland say that she'll be there (according to this article, she always signs on late, for some reason).  But even if Vos doesn't ride (Edit!  Emma Trott tweets that she is!) they should still be a super-exciting team - Annemiek van Vleuten and Loes Gunnewijk are always super-competitive, I'll be interested to see how Emma Trott does in the time trial (too short for her, maybe?) - and I am crossing my fingers that Sarah Düster will be up in the attacks, as she's been a fantastic lead-out rider, and so nearly made it to the end of the Ronde van Vlaanderen by herself!

But don't think the Bloesems will have it easy!  AA Drink-Leontien.nl will be sending their strongest sprint side, riding for last year's winner, Kirsten Wild, who will definitely be wanting to defend her title!  This is perfect Wild territory, and if it rains, she'll be the one with a big grin on her face!

Although Garmin-Cervélo are over in Trentino, their sprint side has formed a mixed team with Water, Land en Dijken - here's to Iris Slappendel having recovered from the injuries that plagued her Classics season and being back to her attacking best - and while there's no TopSport, the Belgian National Team has Liesbet de Vocht (and cyclocrosser Sanne Cant, who's always good on the sand!)

The rest of the startlist is here (or on CyclingFever, if you prefer their layout) and it's full of interesting mixteams, and TWO Australian national teams!  It probably is another of those "we'll know the final startlist after Stage One" races, though...

(For Virtual Directeurs Sportif (Directeur Spotives?) this is classified as VDS 3 - so scoring for the top three riders in each stage, to top 10 in the GC, and the top 3 for each secondary jersey.  Here we have a sprint jersey, a u23 young rider's jersey, and I love this, a best Club Rider jersey.  Full scoring details here)

One of the best things about the race is how to follow it.  They run a ticker for each stage - and last year we had some 7-minute tv spots thanks to local channel Omroep Zeeland - their cycling page looks like the best place to check for coverage and news.  Of course, anything anyone sees is always welcome in the comments!

And there are some reliable bloggers and tweeters in that startlist, so we should hopefully get some riders' blogs after the race, which are always fun!

RaboSter is the final round of this year's Topcompetitie Vrouwen, a series of five races that started with the EnergieWacht Tour.  The GC of the race counts will decide the overall competition, and currently Kirsten Wild leads the competition:

So I hope I've convinced any flat-race doubters!  It should be a fantastic weekend of racing - bring it on!

My huge thanks to tedvdw for all his help on everything Dutch - I appreciate it!