Share All sharing options for: The women’s cycling calendar – part 1: changes over time

Since I heard that the Route de France is the latest stage race in the women’s cycling calendar to be cancelled, at around the same time the Tour de l’Aude should have been taking place, I’ve been thinking about the problems of the women’s racing calendar losing so many races – and what could be done to improve matters.

It feels as though we’ve been losing race after race at the moment, so I wanted to look a bit closer into what’s actually been happening. This article is the result of a very simple analysis, but what I found was surprising, and not all in a bad way…. 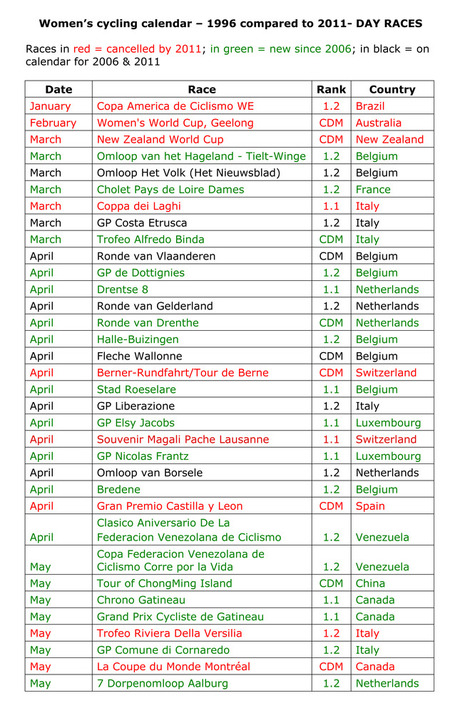 I picked 2006 as a random year to compare to 2011, looking at races registered with the UCI, taking information from the racing calendars from the UCI’s website. I didn't include National Championships, or the Commonwealth Games, as they are only available to specific countries (and everyone has the national RR and TTs!)

One of the biggest competitions in women’s road racing is the season-long Road World Cup (aka CDM). These are day races that vary from very biggest Spring Classics, with the Ronde van Vlaanderen and La Flèche Wallonne, to races where the parcours aren’t so challenging, but the racing makes up from it.

In 2006, there were 12 races in the series – by 2011 this has dropped to 9, making this year’s competition three quarters the size it was six years ago.

Looking at the way the races have changed, the first thing I noticed was how Euro-centric the series has become – in 2006, three races (a quarter of the series) took place outside of Europe; this year only one out of the nine – losing races from Australia, New Zealand and Canada, and gaining one in China. Races were also lost from Denmark and Germany; gained in Italy and Sweden; and the Netherlands and Spain both lost and replaced races in their countries. 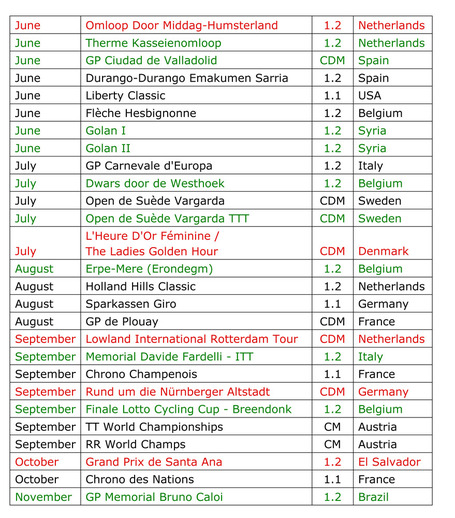 Some of the UCI races had been running already, at national level – the seven Belgian races that make up the Lotto Cycling Cup, for example, have been upgraded to UCI level this year, so it could be argued they are not "new" (It’s less common for races to be "downgraded", although the organisers of the Drenthe races decided not to get UCI status for one of their races this year).

And not all the losses are necessarily "bad" – the Omloop Door Middag Humsterland has been lost as a day race, but now makes up one of the stages of the Energiewacht Tour (just as the 2006 three-day stage race, Novilon Eurocup Damesronde van Drenthe, is now three day races, including the Dutch round of the World Cup). None of this should take away from the fact that there’s still been a net gain of racing days in 2011.

In terms of internationalisation, the 1.1 races that have been lost were all in Europe, and the 1.2s were in El Salvador and Brazil; while we’re gained two 1.1 races in Canada, and 2 1.2s in Venezuela, 2 in Syria, and gained a Brazilian race. 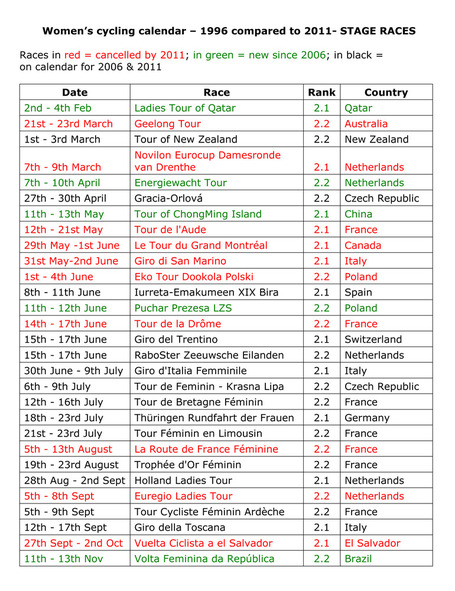 This is where things started looking more negative.

Races were lost in Europe, Australia, Canada and El Salvador, and gained in Europe, China and Brazil.

I wanted to see how this had happened – was it a gradual decline, or has there been a key date? To find this out, I turned to CQ Ranking, and looked at UCI-registered stage races in each year since 2006. I’ve put these in the table below – it’s colour-coded to show the year the races started – and races that were run in both 2006 and 2011 are in blue. 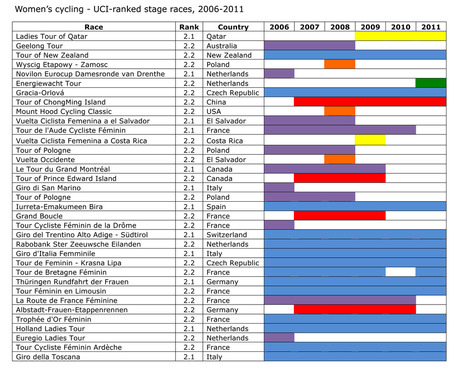 What this shows is that there were increases in the number of UCI ranked stage races up to 2008, when the number dropped, with another increase between 2010 and 2011:

I had a quick look at the high-point, 2008, and found there were 139 stage-racing days that year. One of the factors has been the loss of the Tour de l’Aude this year – one of only two races that ran for ten days. And I wonder if there is also the Olympic effect to take into account – I wouldn’t be surprised if more existing races outside of Europe applied for UCI status next year, so that more riders from the other regions can qualify for the Games.

Of course, it’s important to remember that as many of the races overlap, riders couldn’t ride all of these, even if they wanted to (or could!) – but my grand total of the difference between racing days between 2006 and 2011:

So, there has been a drop overall, and it’s depressing to think that in 2008 there were 12 more UCI stage-racing days than all the 2011 UCI-ranked racing days put together.

But the figures can’t show everything. One of the other changes has been that we’ve lost more races and race days that were aimed at the climbers, and where races have been gained, in general these have been flatter. This is because of the location – losing the Tour de l’Aude, for example, meant losing the Pyrenean stages, and while it’s great to see the expansion and upgrading of races in Belgium and the Netherlands, areas which want to put on races can only make use of the geography they have. It would be a lot more complicated to try to analyse the divides between "climbing" and "non climbing" days, but there has been a clear trend, with sprinters/Classics types generally getting more opportunities to race, while the climbers and stage race general classification riders have lost out.

Of course, in terms of geography, one thing stands out – the fact that there are areas of Europe (not to mention the rest of the world) that have great geography, but no UCI-ranked races at all. At a Brit, I raised my eyebrows at the fact there were none in the United Kingdom between 2006 and 2011, especially as in that time Nicole Cooke and Emma Pooley have been two of the most dominant riders, and both won World Championships. Maybe when it comes to thinking about solutions, targeting the development of races in specific areas, to create a more diverse calendar could be an option.

The state of the calendar shouldn’t be seen as all negative. The increase in day races is very welcome, and while races have been lost, there have been some excellent additions to the calendar, especially from race organisers who have started small and expanded their range. The Luxembourg races, for example, which have added a new race each year, and upgraded their races – and the Energiewacht Tour developing from a day race, for example. These models, of starting small and building up – and the partnership the Energiewacht Tour made with the local tv channel – could turn out to be more sustainable in the long run.

In Part Two and Part Three, I’ll look at some ways that all the stakeholders in women’s cycling might be able to work together to help strengthen the calendar – and if you have any questions, challenges or thoughts on that, or anything in this post, add them to the comments!