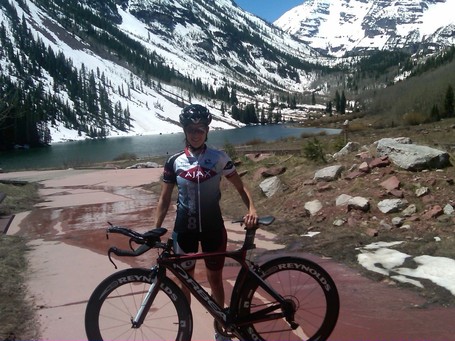 Beginning on 22 August, the Aspen Snowmass Women’s Pro Stage Race will host a field of top level women riders for a three days of racing. The event includes a time trial, which runs from the base of Aspen Highlands to Maroon Bells, a hilly circuit race around Snowmass village, and a criterium in downtown Aspen. The women’s race overlaps with the men’s USA Pro Cycling Challenge, and the criterium will take place on the same day as the men’s stage finish in Aspen.

"When the men’s press release came out for the Tour of Colorado, I was really frustrated there was no women’s race," said Jessica Phillips. Phillips raced at the pro level for nine years, and won the U.S. National Championship twice. Together with her local cycling club, Ajax Tavern Cycling Team, Phillips set out to organize a women’s race to coincide with the men’s stage race, now officially called the USA Pro Cycling Challenge. "I’m not going to sit here and complain about it" was her attitude.

As she began the planning process, Phillips contacted several of the major women’s teams in the United States and asked them what it would take to bring them to Aspen for the race. The key requirement from the teams was that Phillips and her crew put on a multiday race. Phillips confirmed that she has secured a commitment from several of the major teams to ride the three-day event in August. "Things are looking awesome," said the enthusiastic Phillips.

The Aspen Snowmass Women’s Pro Stage Race will open with a 10 mile time trial, which runs mostly uphill from the base of Aspen Highlands. Despite the climbing, Phillips expects that the winning riders will use their time trial bikes for the stage. "It’s the most beautiful course you could have," she said. The second day, the race heads to Snowmass for a hilly circuit race around Snowmass Village.

The event concludes with a criterium in Aspen on the finishing circuit of the men’s USA Pro Cycling Challenge stage. The criterium offers the women the added exposure of racing in front of the crowds drawn to watch the men’s finish and Phillips said that it is possible that the women’s race will receive live television coverage on Versus. Phillips is hoping to have lots of prime laps in the crit to keep it lively.

The race will follow an omnium format, though Phillips said they have not yet finalized it. "We’re creating our own format," she said. Riders will receive points for their placing in each stage, and the rider with the most points will win the overall. "It’s a tough time trial. Kristin Armstrong or Clara Hughes could show up and win by three minutes. I didn’t want that to be the end of the race," explained Phillips.

The goal is to encourage aggressive racing during every stage. The omnium format also allows the officials to pull dropped riders from the circuit race without ruining their chances to race the following day. This move will make the racing safer, because there will not be lapped riders on the course, while also ensuring that no one travels to Aspen only to race two days. "We really want to showcase women’s racing," Phillips said, and she is hoping the format leads the women to race hard each day.

Phillips estimated that the race’s budget at $30,000, and she said that the sponsorship effort is "going really well." The race is registered under "Category B" with USA Cycling, which allows the organizers to cut costs on items such as bleachers for spectators. To keep their Category B status, the race must keep the prize list under $10,000.

Phillips has set up a nonprofit organization for the race. "I’m not doing this for a profit," Phillips emphasized. The organizers held a fundraiser in Aspen on 2 June which raised "a lot of money." In a show of support, HTC-Highroad auctioned off a ride in their team car. Phillips is hoping to build a financial foundation to keep the race running next year and beyond, and she said that United Healthcare may become a sponsor.

What the race needs now is for riders to show up, according to Philipps, who will race in the colors of her local Ajax Tavern team. The women do not need a team, they can register as individuals. Aspen is expensive and Phillips knows that travel costs can prevent women’s teams from getting to the starting line. The race organizers have set up some lodging deals for riders coming to the race. She is also hoping that the draw of a big audience, hard racing, possible television time, and the prize list will encourage them to show.

"Everyone is always talking about how to grow women’s cycling," said Philipps. She is hoping her race will help in that effort. "We’re doing it for the good of women’s racing," she emphasized. To be successful, the race needs sponsors, teams, and riders all to join in the effort. "Everyone has to step up," she asserted. Despite the work involved, Philipps is optimistic about the race’s potential. "I’m excited!"