As you all know, Chris just challenged us to all write a little preview of five riders going to the Tour de France. He then proceeded to claim four riders for himself, setting the bar really, really low for the rest of us. Which is awesome, cause I never really mastered the high-jump in high school. Tia Hellebaut and I, so not related.

For my five subjects, I picked out some dudes of whom you're maybe not really sure why they're going. Or who they are, for that matter. PodiumCafé, meet Addy Engels, Jean-Christophe Péraud, Grega Bole, Jelle Vanendert and Thomas De Gendt. 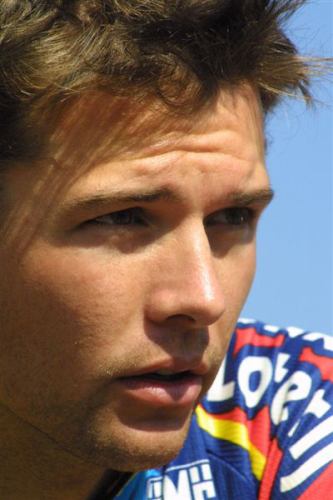 Despite the name, Addy isn't English, and despite the team, Addy isn't Belgian either. No, Addy was born in Emmen, way up high in The Netherlands, close to the German border. Addy, who isn't entirely bad too look at, is one of those guys who have been at Quick-Step for like ever, or in this case since 2005, despite some early-career stints at Rabo and Bankgiroloterij, an early incarnation of Skil.

Despite his 34 years on planet earth (born 16 June 1977, a slightly belated happy birthday to you, Addy), the Dutchman is an almost TdF newbie. He has entered the race only once before, in 2002, when he finished in 94th place, two hours, 21 minutes and 37 seconds later than Sir Lancelot, and six seconds behind Denis Menchov. It was a good year for Addy, that year, because earlier in the season he clinched  the 24th spot in the Giro d'Italia, a career highlight before he moved on to a life of domestiqueness. Addy, a former U23 Dutch champion, has never won a race on the elite level.

This year, Addy has veered from his usual GT Giro/Vuelta double with one single purpose: help Kevin. Kevin who? Well, Kevin de Weert of course. Injury prone Kev is aiming high for this Tour - high meaning top 20ish - though he has no real objective. After an eighteenth spot in last year's Tour and a 17th spot in this year's hard-ass Tour de Suisse De Weert feels good and in shape, and wants to bank on that feeling. For Quick-Step it's Tombo, Ciolek and Steegmans for the sprint train; Chava, Pineau, Devenyns and Terpstra to attack the hell out of the peloton; De Weert for GC and Addy Engels for De Weert. 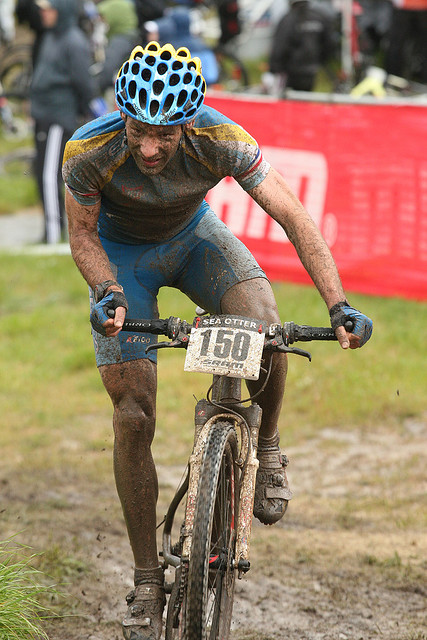 Why is JCP in Tour de France? Well, cause he's French mostly. That's all the reason they need. I'm French, this race is French, let's go. Even if you're not actually, really, originally a roadie. Which you might have guessed from this picture here. Cause you folks are smart like that.

Péraud started off on the mountainbike, and he wasn't half bad at it either. JC - born in the same year as our boy Addy but on a way better day (22 May 1977) - is a former Euro champ (2005), world team champ (2008) and Olympic silver medallist (also 2008). But one day, the road called. Péraud answered by entering the 2009 French ITT champs. He won. So he went to the World ITT champs. Cancellara won. Because some things just don't change. But Péraud became 11th, which is ok too.

Omega Pharma-Lotto took notice of all this, and offered him an asphalt-cycling contract, thinking dude might do well in a supportive role for JVDB. Péraud rode Paris-Nice, came in 8th; rode Pais Vasco, came in 4th. For TdF prep the roads of Dauphiné called. They must've whispered, cause Péraud leaned up real close to listen. Like, face to the asphalt close. He DNF'ed, and missed the Tour.

At the end of 2010, his dream came true when he moved to Ag2R. I'm French, this team's French, let's go. He went for a 2010 repeat this year: rode Paris-Nice, came in 6th: rode Dauphiné, came in 7th. At the French team with the mud-coloured jerseys - JCP probably likes that - Péraud will be part of a triple low-key GC assault: Roche, Gadret and JCP himself. 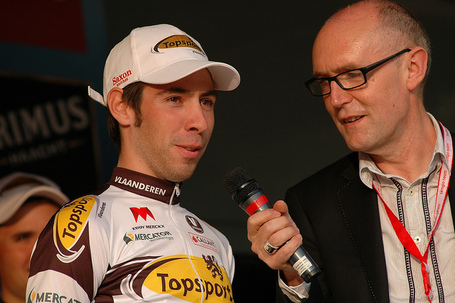 They also gave us a love of attacking. The TSV kids, they like to show themselves. They're U23 riders looking to find a spot on a big team, they sorta have to. Young Sep wasn't afraid to go into a break with PhilGil and Big George, he wasn't even afraid to attack them in the very final kilometers; even though his legs are cramping all over the place. Likewise, a young Thomas wasn't afraid to go in a break with Seba Rosseler.

That isn't all young Thomas isn't afraid of though. After his TSV graduation, the Belgian attacker - being in the break for every single stage of the 2009 Tour of Britain justifies that title - got a gig at Vacansoleil, where he just went on attacking. De Gendt surprised the world - but not me - by winning the first stage of Paris-Nice this year, attacking his co-attackers Roy and Voigt. Goss stole the jersey from him but De Gendt said "Hell no!", grabbing on the road and at the finish bonifications just to get the jersey back. First year at a ProTour squad, but he already knows what a yellow ASO jersey around the shoulders feels like. Maybe he wants that feeling back? I wouldn't mind.

Just last week, Thomas De Gendt did something similar in the Tour de Suisse: attacking his co-attackers, of which Andy Schleck was one. The road was going uphill too. This boy Thomas, he's got skill. At Le Tour, he will display that skill. Mark my words: Thomas will attack. And if the gods have any mercy on my soul, he'll be successful at it too. 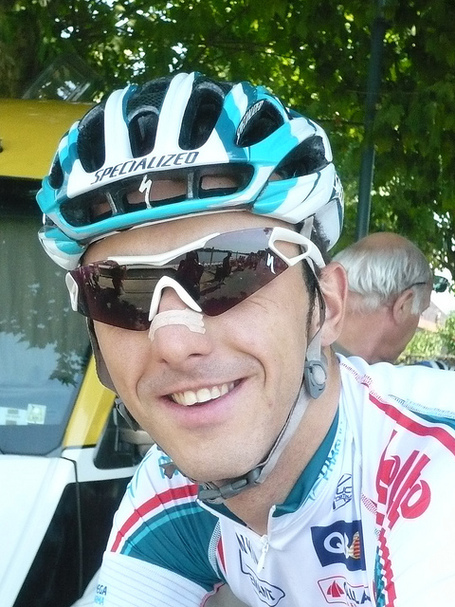 Jelle Vanendert was born in a good year (my year!) and grew up with his feet on excellent soil (my grandparents' soil!). All reasons for liking this one. Also, he's a great domestique. The kind that rides his heart out for his leader - Philippe Gilbert or J to the VDB in this case - without complaining. The world does not usually notice these guys. They ride hidden from attention, from the front of the race - Uit uw doppen kijken, Phil, there's a nasty corner coming up - to the back - Can I have some more bottles please, Jurgen's thirsty - and back to the front again. Sometimes these guys become cult heroes, hello Jens!, sometimes they remain invisible until Conta gifts them a stage.

Jelle's fate in this year's Tour de France is just that: invisibility. Quiet, dependable, bottle-fetching invisibility. Or in Jelle's own words: he wants to be this year's Mario Aerts. If that ain't a domestique pur sang, I don't know who is. 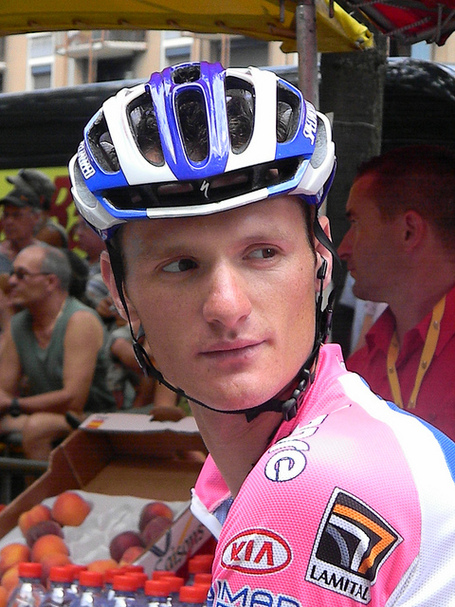 And finally, the best known of my five Chosen Ones: Grega Bole. Well, I think he's the best known. Maybe Thomas is best-known nowadays, cause Thomas wins things. Grega doesn't win too many things. He will though, one of these days. He definitely will.

What things will Grega win? Well, sprints. Not just your regular old boring nothing-happens-for-five-hours-and-then-Cav-wins sprints. Cause you see, if Cav wins then Grega doesn't win. That's how cycling works. Only one wins.
Only sometimes five years later someone else wins retroactively. But that's another discussion.

Grega wins on trickier, nastier finishes. Grega is one of those guys who likes to hide among the climbers on semi-difficult days, secretly, quietly riding with the pack until they get to the finish line; much like a cheaper, less world championy Freire. In short, Grega Bole is Lidl-Oscar. Same product, different package, lower price.

Until his time and his big win come that is, whereupon his price - both real life and VDS - will sky rocket. And when that day comes - and it'll come soon - I'll be there to tell you all... I told you so.
I'm like that.