Giro Donne – The course in brief

Share All sharing options for: Giro Donne – The course in brief

The Giro Donne kicks off this Friday 1st July from outside the baths of Caracalla in Rome, and after 934km and over 8000m of climbing it finishes on Sunday 10th with a time-trial at San Francesco al Campo just outside Turin. In between it offers something for just about every type of rider, although it wouldn’t be a true Giro d’Italia if it didn’t show just a little bit of bias to those super scrawny climbers. By my reckoning there are three genuine flat sprint stages, one uphill cobbled power sprint, one intermediate/classicy sort of stage, three mountain top finishes and one suicidal downhill dash. If you don’t like at least something there then you’re probably in the wrong forum, or only come here for Barbie Barbie, dolphins and photos of cyclists smothered in baby-oil. So here’s where life forces you to make a choice. Do you click on one of those or Continue reading this post ".

Stage 1 of the Giro is traditionally a bit of a stinker to watch. No matter what little tricks the organisers come up with to break things up, everyone is still too nervous to let even a dead loss group escape, and they still have the legs and the team-mates to be able to do it. This year’s trick is cobbles. And an early climb. They leave Rome along the Via Appia Antica (and if you ever visit Rome, that is one of the nicest Sunday afternoon walks you can make), climb to the Pope’s summer residence at Castel Gandolfo (just a Cat 3 climb) then do a few laps outside Velletri before they hit the cobbled ascent to the finish line in Piazza Cairoli. Will that make a difference to the usual gruppo compatto finish? Well there might be a few gaps in the line to split the classification up a bit, but nothing that will matter at the end of the race.

In Stage 2 things get a bit nastier. The race leaves Pescocostanzo, almost 1400m above the sea in the Appennines, drops 1000m, then climbs back up it again to finish back in the start town. Oh, and in between there’s another 500m climb to go up and down again. It’s an interesting stage because the climbers might be tempted to get some time, but then again there’s stage 3 tomorrow.

Bridie had a few thoughts on stage 3: we drove stage #3 of Giro Donne today. It makes Flanders seem like kindergarten. I’ll need Contador’s compact, a Y chromosome & nutella #noo. This is the stage that looks like we all imagined the 7 Muri Fermani would. No single climb is more than 200m, but there are lots of those making at least 1200m of climbing. Still the Muri Fermani finishes in the same place, and the two winners to date are Giorgia Bronzini and Rasa Laleivyte, so it’s not a dead loss for sprinters.

Stage 4 to Forli was always going to be a sprint stage, but the originally planned laps of the finishing circuit have been cut, leaving it at just 68.9km. That looks like a fast peloton leading to a big bunch sprint. And Stage 5 from Altedo to Verona should be more of the same, even if today the course is nearly twice as long at 126km

Stage 6 finishes in Piacenza, the home town of World Champion Giorgia Bronzini, and the organisers look to have done their best to help the local girl to the win. 15km from the end they cross a small hill at Rivergo, and from then to the finish it is all slightly downhill. But that hill is just 130m higher than the finish line, so it’s hard to see any of the other sprinters being shaken off. Especially since after today they hit the mountains, for three days of suffering and bottle carrying.

Stage 7 and enter the climbers. Or stage 7 and enter the legendary climbs if you prefer, because today it’s time for the Mortirolo. But even though the Mortirolo seems to be the big selling point of this year’s Giro it’s unlikely to be decisive. They go up the long, shallow side, which won’t give the pure climbers much chance to get away, and then if they do the stage actually finishes in Grosotto, at the bottom of the hill. And because little weeny climbers tend to be fairly rubbishy descenders, it could be that the winner today comes from the group that crosses the summit 2nd or 3rd. Actually I like this aspect of the course design. Get the viewers hooked while there are still a few more stages to come.

Stages 8 and 9 are where the race is likely to be decided. Just like the previous day’s Mortirolo stage, stage 8 to Torri di Fraele and Cancano has about 2000m of climbing, but today the finish line is at the top of the mountain, and there are very few downhill stretches to give your legs a chance to rest. Thankfully for some it is under 80km in total. But enjoy those little stretches of rest while you can, because the profile of stage 9 to Ceresole Reale is similar, but almost half as long again at 112km, and although there are only around 1400m of vertical ascent, HTC DS Jens Zemske believes that this stage could be more decisive as the gradients increase the closer you get to the finish line.

Then on Sunday 10th the race concludes with that 16km time trial. It’s almost flat and not in the least bit technical, and very unlikely to shake the GC up. The 2010 course was pretty similar and Ina Teutenberg won that. For the geeks, the table below shows my rough estimates of the nature of the different stages.The figures for climbing are roughish estimates taken from the timetables the organisers publish. 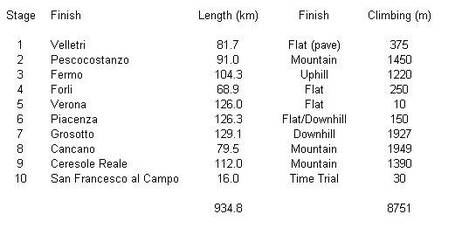 Coming up next a look at the main contenders.