Martine Bras has seen the ups and downs of a cycling. From being Netherlands National Championship at 10 years old, to having to take three years off through illness, at 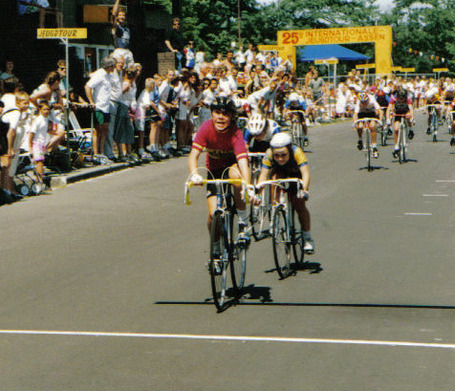 33 she’s now having the best year yet.

After a few years in Italian and international teams, she moved back to an all-Dutch team for the first time in a long time. She’s riding for Dolmans Landscaping with all kinds of ambitions, both personal, wanting at least two more years at the top of the peloton, with her eye on a precious spot on the Dutch team when the World Championships come to Valkenburg, and altruistic – passing on what she’s learned to a new generation of young Dutch riders.

I interviewed her before she set out for the Spanish races, and she told me about her lifetime in cycling. She’s seen a lot of changes in the sport - no matter how bad the accommodation is in the races these days, at least they’re not sleeping in bomb shelters any more… 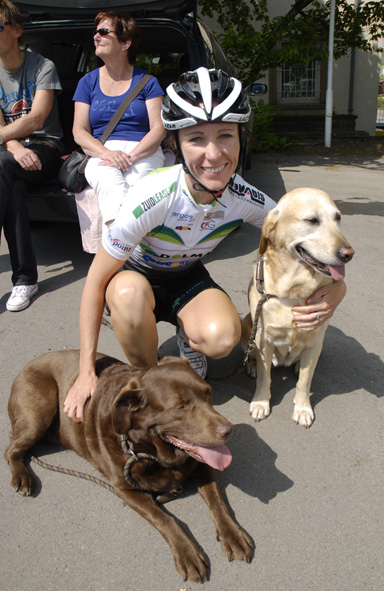 After riding for Gauss last year, alongside Giorgia Bronzini, Bras has moved to a very different type of team in Dolmans Landscaping – built around her as the star, giving young riders the chance to experience the biggest races. Bras has a reputation for helping youngsters get started in cycling – assisting riders like Chloe Hosking and Emma Trott to get to their first European teams – but this is a new step.

"It’s been the best year I’ve had since I came back. That has a lot to do with the fact that I’ve gone to this team, because I can ride my own races, and they really trust and believe in me, they give me a lot of confidence."

The plan for Dolmans was for the young riders to support Bras in the races she excels at, Spring Classics and short stage races, and then ride for wins in the smaller races, while Bras spends the summer with the Netherlands National Team. "That’s a good thing, because if you always just ride for one girl, it’s not healthy for the team – and I’m not a girl who wins races very easily, so that could be a bit frustrating after a while".

Three years off the bike

Bras began ice-skating at age six "I really enjoyed it, but I never liked the cold weather!" Like many Dutch cyclists, she rode her bike for training, found she preferred cycling, and switched sports at nine. At ten, she was National Champion for her age group, and as a junior was picked up by the Dutch Federation, attending training camps, and moving into Dutch teams. 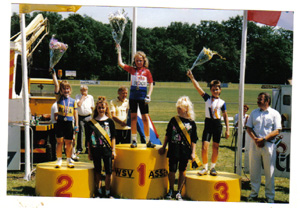 Things were going well – but then, at age 25, she started to get sick. She tried to push through the illness, but every time she took a step forward, she immediately fell three steps back. She was diagnosed with glandular fever, and the doctor made it clear – she had to stop fighting. "The moment my doctor told me to stop cycling, everything just fell off my shoulders. I didn’t touch my bike for one and a half years". For the first time, she relaxed, and although at first she was very sick, once she got a bit better, she was able to have a more normal life.

"I went to cafes, and I had fun, I just did other things – I never thought that it was a bad decision. Now I’m even glad I did it, because now I’m really fresh, and it doesn’t feel like I’ve been on the bike for twenty-four years".

Once she got better, she started riding, at first just for fun, but then she started racing again. "I just thought I’d give it a try and see what’s possible, I never thought I would be as good as I am now, never."

She signed for Lotto in 2007, and won Prijs Stad Roeselare and a stage in the Holland Ladies Tour. Since she’s been back, her results have been getting better and better – better than before her illness, in fact. You’ll always see her in the top ten, especially in the tough classics, and you can guarantee she’ll be on the podium many more times this year.

Part of this success comes from re-committing to cycling – but it also comes from putting the pain into perspective.

"When I started back, I was a bit older, and I realised nothing comes for free in life. I used to be a bit lazy, I trained, but I never worked really, really hard, and when I started cycling again, I learnt how to suffer in training as well, not only in the races"

"And then this big moment that actually changed my whole point of view on suffering was when my father passed away. He had cancer and he had to fight really, really hard. And if you see that, how hard people have to fight to survive their disease, it just makes suffering on the bike nothing. Of course you have your bad days, when your legs are sore and it doesn’t go very well, but that’s just part of what you’re doing, and it’s a free decision. It’s my decision to suffer on the bike, it’s my decision to have pain. Since my father passed away, that made me stronger mentally. Sometimes I doubt myself and I’m not sure whether if I’m doing everything right. But I think I get good results because if I’m in a lot of pain, I just think of him and it makes it all easier." 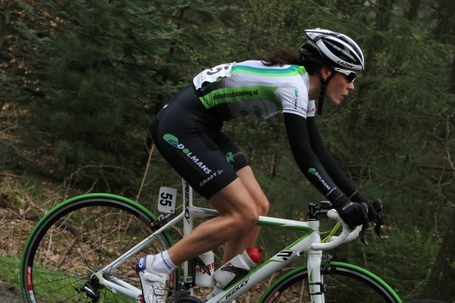 The Dolmans project has turned out to be harder than Bras first thought it would be, especially as the standard in the women’s peloton just keeps improving. It’s been tough for the younger riders, racing at such a high standard, getting dropped in races like Trofeo Binda, where over half the peloton didn’t finish - but they have still have their own successes. 18 year old Laura van der Kamp came 4th in the Novilon Eurocup van Drenthe, and has been winning national races like the Omloop van IJsseldelta, and 20-year old Winanda Spoor won the UCI 1.2 race at Bredene, and came 12th overall in the RaboSter. 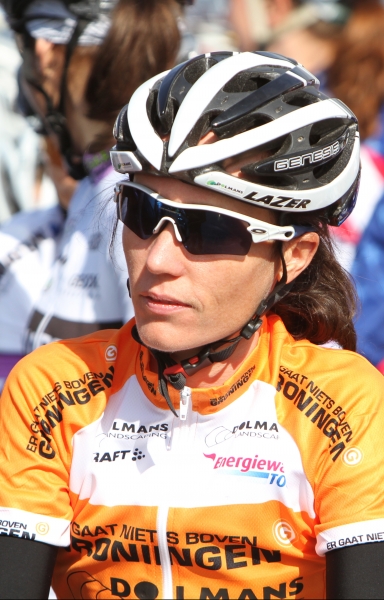 But one of the best things about the team is how much fun it’s turned out to be. "When we sit together before a race, we just laugh and laugh. I just say we have to keep on laughing, because that will make us go better on the bike! I never realised that it was that important!"

"Masha Pijnenbourg and I have the same sense of humour – I was actually injured in the beginning of the year, because I laughed so much that the muscles in my tummy were so sore I couldn’t breathe properly. At first I had no idea what it was – and then when I saw her after a few days, we sat talking and she made me laugh, and it was so painful I said "Oh my god, I’m injured because of you!" That just made me realise that I made the right decision to go back to a Dutch team!"

A Dutch girl in Belgium

Bras lives in Belgium, with her boyfriend Stijn Ennekens, who’s also a cyclist, and her two labradors. Off the bike, she loves the internet, working on her website and blogging for Elite Ciao, and her social life – cooking for friends, eating out, having parties, and riding, of course. Having a partner who is also a cyclist is another reason Bras feels she’s improved so much.

"He’s such a totally different rider than I am, and I love to see him race because he’s very aggressive. When I won last year in the Holland Ladies Tour, it was because I started to ride the way he always rides, completely aggressive and just trying to attack and see if it works".

Although the Belgian lifestyle suits Bras, she doesn't plan on changing nationalities. If she did, she’d have less competition for places at World Champs and Olympics, but "In my heart I'll always be Dutch. I'm proud to be Dutch. I just renewed my passport, so I’m definitely Dutch for the next five years!"

Throughout our interview, she’s laughed a lot – especially about how long she’s been cycling. She’s seen a lot change in that time – when she was first racing, there were no mobile phones, no internet – but above all the way women raced was fundamentally different, no sprint trains 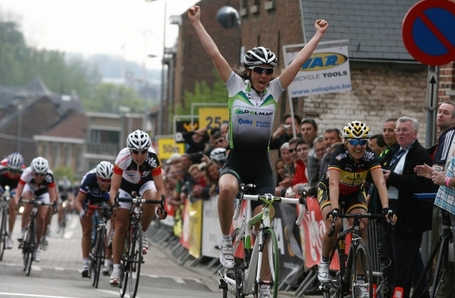 , no team tactics, and she had to buy everything herself – her own bike, her clothes. As for the hotels, Bras laughs at what she had to put up with – having to drive for forty minutes just to get food, or staying in hotels where the food ran out. "I tell [the professional men] ‘you should see what I’ve seen’ – I once had to go to MacDonalds for food as there was none at the hotel! They don’t believe it, but it’s really true".

"I have slept in a bunker, in a stage race in Switzerland – seven teams in a bomb shelter, for a whole week! When the lights were off, it was so dark you could not find the toilet! It was so warm, we had to sleep outside! When I think a race is bad, I think ‘Once I slept in a bunker, underground’. So yeah, I’ve seen so many changes, I could write a book about that, how female cycling has changed in the last twenty years!"

I can’t think of anything better – Bras tells a great story, and she’s perfectly positioned. From National Champion at ten yeas old, to, hopefully, the World Championships, and maybe the Olympics as well, she’s had an amazing journey, and it’s not over yet!

Interview: Sarah Connolly
Photo credits: Martine as a child, provided by Martine Bras; Martine & dogs by Sarah Connolly; all others by sportfoto.nl