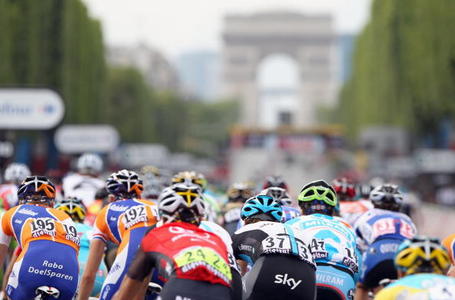 It's the week before the Tour, and things are getting a little crazy. ZOMG! Tour de France! Four more days!

Do we have time to look back at last week when all we want to do is get to next week? Why yes, of course we do. Because it just wouldn't be right if we didn't. Last week we:

Made plans to watch the Tour de France and ignore our own racing ambitions.

Previewed the contendAHs for the Yellow Jersey at the Tour de France.

Tried to figure out who is actually racing the Tour de France.

Caught up with the teams and riders for the Giro Donne.

Were confounded by the Spanish Courts. Again. Roberto... who?

Chatted (too) briefly with Ted King, the King of Style

Gawked at the Vanderkitten women at Nature Valley Grand Prix.

Tried to understand the Green Jersey Competition at this year's Tour de France. Maybe we even succeeded.

Checked out some mountains that the Tour de France has overlooked.

Hoped that Bob Stapleton finds HTC-Highroad a new sponsor before the end of the Tour de France.

Talked to Richard Moore about the Hinault-LeMond rivalry and his book, Slaying the Badger.

Saw the sun rise in the east and Tom Boonen sign a new contract with Quick Step.

Meditated on the surreal Contador doping situation. Ant ranted a bit, too.