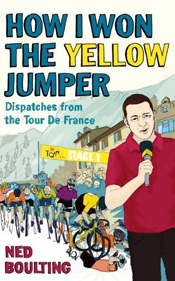 ITV cycling pundit and How I Won The Yellow Jumper author Ned Boulting talks about the Tour de France and offers a clue as to where the race might end up when the British broadcaster's current contract expires.

Podium Café: So, Ned, tell us, how does it feel to have written a book about the Tour de France?

I have to confess to keeping a copy of it by my toilet and "dipping into it" every now and again.

PdC: You're what, forty-something, yes? You would have been mid-teens or so when Channel 4 first brought the Tour to British TV. Any memories of those days?

NB: No. As I say, my first ever experience of any bike race anywhere, either live or on the telly, was the Prologue of the 2003 Tour which I so utterly mismanaged.

But the way the crew all bang on about the Channel 4 days, I sometimes feel tricked into thinking I remember, like that robot bloke in Total Recall. Are they my memories, or have I had them auto-uploaded?

PdC: You've now got eight Tours under you since that first race. Two memories please: the highlight and the lowlight.

NB: I think the live interview I was lucky enough to do with Brad Wiggins on the summit of Verbier stands out. It was a huge moment. I never thought I would see a British rider drop Lance Armstrong on an Alp. Never.

Lowlights are my bread and butter. I found last year's tepid non-race up to the Tourmalet in the pissing rain utterly unengaging. We were promised a showdown. We got a letdown. And then we had to pack the truck up wearing bin bags to keep the rain off. I had to throw away my shoes that day. It was the kind of mud which hangs in great clumps from your feet with every step.

PdC: Phil'n'Paul. Just how big is their suitcase of courage?

PdC: Socks seem to be very important to you. Particularly old socks. Smelly ones. And the problems they cause. Sean Kelly must think you modern media types have it soft, when you tell him about your sock traumas. Back in his day, he had to wash his kit himself at night in the sink. Obviously you can't do that. Would you not just chuck the old socks out and buy new ones?

NB: Sean has a way of looking at you with disdain oozing from his every fibre. From a normal mortal, you might take offence. But he's Sean Kelly, for God's sake. So you cut him some slack.

As for chucking away socks. I might try that this year. It strikes me as peculiarly decadent. But I might give it a go.

PdC: ITV have the Tour through to 2013 - if Team Sky actually win anything of significance between now and then the Tour's broadcast rights will probably be snapped up by Murdoch when they come up for renewal. How do you feel about the thought of that?

NB: I don't think they will. I genuinely think that the will is not there at Sky Sport to move in on the rights. It'd be complex taking them off Eurosport, who have a pan-European contract in place with ASO. ITV own the free-to-air rights, which Sky wouldn't be in the market for, being a subscription service.

Here's a titbit for you, though. I wouldn't rule out Channel 4 showing renewed interest.

PdC: Team Sky create an odd balancing act for you. On the one hand you're media, you have to be objective, know no fear, show no favour. When they do something downright stupid, like erecting big screens around their team bus, you have to report that. On the other hand, they're Brits, you're Brits, so you inevitably become cheerleaders for the cause, bigging them up and telling viewers how brilliant and innovative they are. How do you strike that balance?

NB: Never cheerleaders. Please. Never. We reflect the increased interest in their team, for sure. People at home tell us that they are curious, so we focus on them more than on other teams. But when they make mistakes (as they did spectacularly on the Tour of Britain last year, a show which I present) then we will always reflect that.

As for the brilliance and the innovation etc, well, I think we're all a bit over that, aren't we? It's all about the race, now.

PdC: Bradley Wiggins rode a good Tour in 2009, and through to the start of the 2010 race he talked a good Tour. What do you think went so wrong once the race got underway? Would he have been better off staying with Jonathan Vaughters at Garmin, where his ego might have been kept in check?

NB: Arguably, yes. There was much that was wrong about the way he was signed, and the way that the team was built around him. But it was in his head that the race went wrong. His refreshed approach this year has begun to pay dividends.

And as for those who criticise him for a "lack of panache"...he can only be the rider he is. He can only play to his own abilities/strengths. I don't think he should be given stick for this.

If I have been critical of him in the past, it's born more out of frustration. Take the Tour of Britain, for example. A rider of his calibre should be willing and able to ride away from that kind of field, in that kind of race, and show his class.

PdC: Of the two Brits doing anything in the peloton, Mark Cavendish is the one you seem to have most time for, even if he won't give you his mobile number. What'll he have to do to get the recognition - respect - he deserves from the rest of the British media, the rest of Britain's sport fans?

NB: He gets huge respect from the media. He doesn't need any more than that. The rest is out of his control.

But don't forget that although cycling is growing in this country exponentially, it's still pretty small beer. You and I might lose sight of that fact. I am always astonished when I step back out of the bubble and come home at the end of July, that most people haven't paid the race a blind bit of notice. Do you follow handball? No, didn't think so.

PdC: Doping obviously features in the story of How I Won The Yellow Jumper, I mean, for most of the last twenty years it's been pretty impossible to avoid the subject when you talk about cycling. When you look across at some of your media colleagues in the press area, and you see Richard Virenque commentating for Eurosport France, or other former pros who've doped on other channels, do you ever wonder if the rest of the media actually gives a toss about the problem?

NB: Spot on. German telly aside (and they are frankly a bit too neurotic at times), there is a hugely comprimised attitude towards doping in the TV compound. The Dutch are particulalry cynical. The Spanish and Italians (of course) not far behind them.

But it's not an area on which you should graft polarized thinking. Take the Millar debate. There's every chance that Dave might end up doing the TV thing alongside us in the years to come. I think he should. But you could equally well argue that he should have no place commenting on the sport. Both arguments have some validity.

PdC: Speaking of whom ... David Millar features in the book, even provides a nice back-of-book blurb. When it comes to doping, he did the crime, served his time, and came back to pick up where he left off before EPO bought him a rainbow jersey. If he hadn't been caught when he was, do you think he'd have achieved greatness?

NB: Who knows. He was a totally different human being pre-bust, in almost every regard. I suspect he would have found a way of ruining his talent for ever.

His Indian summer as a rider is one of the things I am most looking forward to this year. How many suicidal breaks will he get in?

PdC: Floyd Landis. 2006. Morzine. He's just been to dope control. You doorstep him. From the subtext of his answer to your question, you know he knows what's going to be revealed by that pot of piss. How did you convey that knowledge to ITV's viewers that night?

NB: I didn't. I should've done. But I couldn't. As I say in the book, this was my first exposure to the overt suspicion of doping. It seemed so crass, I could hardly believe it. I was too green to trust my instincts.

Put me in the same position now, and you get a very different report. Trust me.

PdC: David Walsh gave you a bit of advice about Lance Armstrong: "Don't regret what you write, Ned. Don't look back at your words in later life and regret the position you took." Walsh knows whereof he speaks, given his own role covering the sport in the eighties and nineties. Do you have any regrets about the way you covered the Armstrong story at ITV, during the years of dominance, and during the comeback?

NB: Blimey, this is getting a bit heavy.

I think Gary went as far as he could in his more editorial moments.

I challenged him on a handful of occasions, at a time when, I can assure you, no one else in the TV compound was being anything other than sycophantic.

But you know, we can only do what we do. Our job first and foremost is to show you all the race. Walsh and Kimmage may be part of the same industry, but that's where the similarities end. They have a very different function, and more power to them.

PdC: Bernard Hinault, Laurent Fignon and Robert Millar are just three past winners of the media-presented prix citron for the most uncooperative cyclist in the peloton during Tour-time. From your eight tours of duty at the grande boucle, who would you award that prize to?

Ned Boulting is the author of How I Won The Yellow Jumper (Yellow Jersey Press).

You'll find a review of How I Won The Yellow Jumper on the Café Bookshelf along with your chance to win your own Yellow Jumper..

Our thanks to Ned Boulting for taking the time to participate in this interview.