Share All sharing options for: The Tour Of Utah Announces 2011 Stage Details 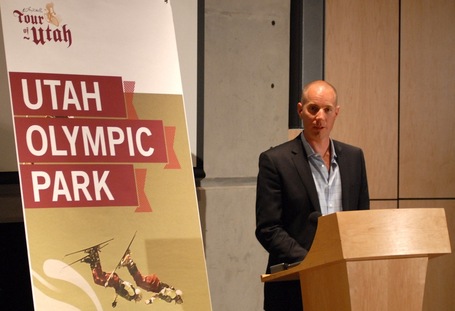 The 2011 Tour Of Utah formally kicked off today with a pair of press conferences to announce the official route of this years race. As part of this mornings event local pro Evan Hyde (Realcyclist) rode the prologue route at the Utah Olympic Park. After finishing the climb from the Alf Engen museum to the top of the 90 meter ski jump in about 5 minutes, Hyde made a few comments on the route. He expressed the opinion that the prologue would be won in under 5 minutes, not necessarily by a pure climber rather by a rider who could put out a sustained effort over the route. The initial test for the riders gains 157 meters over 2km.

Not long enough nor steep enough for a climbing ITT, the route will still create enough separation to create an interesting GC battle over the ensuing 5 stages. The route winds around the perimeter of the bobsled and luge tracks at Utah Olympic Park. The park is located on the north end of the Snyderville Basin out side Park City Utah. The Olympic Park venue is well suited to the event, as it will present no impact to Park City for the duration of the event. Hyde went on to say that His Realcyclist team is prepared to take an early run at the tour GC and focus entirely on holding the race lead. No stage hunting for the team this year, it's all about putting former Tour Of Utah winner Francisco Mancebo back on top of the podium in 2011. 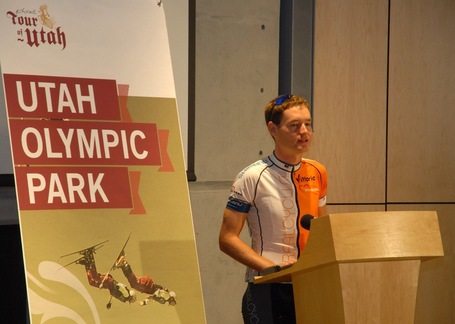 Later in the day in Salt Lake City, the remaining 5 stages of the 2011 race were unveiled. Holding to a pattern of focusing on host cities, this years tour has more circuit style racing than the long point to point stages of past editions. The five host venues are Ogden, Provo, Miller Motor Sports Park, Salt Lake City and Park City. Park City holds the distinction of hosting one event and the start of the Queen Stage on the final day of racing. Gone this year is the Ogden to Salt Lake City stage over Big Mountain and the mountaintop finish at Mt. Nebo. Also gone from this edition of the Tour Of Utah is the Park City Criterium. Because the 2011 edition of the Tour is rated UCI 2.1, there can be no criterium by UCI regulation. Full race details are posted on the official Tour of Utah website. 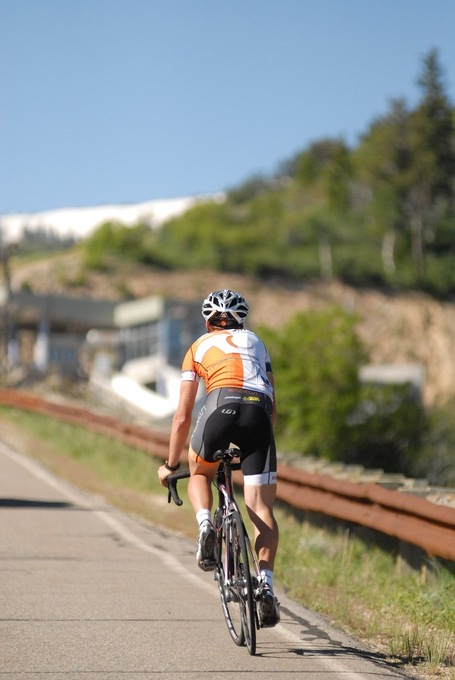 Stage overview below the fold.

Words and images by Chris See

At 187 k this is the longest day of racing for this installment of the Tour Of Utah. Starting and ending in Ogden's Historic Old Town district, the race will make three circuits of an approximately 62 km loop. The route takes riders up The North Ogden Pass, around Pineview Reservoir, and descends twisty Ogden Canyon as it returns to the starting point. The stage is expected to run nearly 5 hours. While the finish is flat, the course is not expected to generate a field sprint to finish. The course profile shows 2500 meters of climbing.

With only 850 meters of rolling hill, this may be the only flat stage of the entire race. At 161 km the second stage will take the race around Utah Lake in a counter clockwise direction. Last years stage followed a similar route in it's early miles. The outcome of this stage can be determined by wind. Expect to see the stong teams use this to their advantage and watch to see who misses the move when the road turns east and the cross winds start. Echelons anyone? After circumnavigating Utah Lake the route turns back north and finishes up in Provo. This is the stage most likely to end in a true sprint.

The rolling pavement of the Miller Groups road race venue is the perennial home to the Tour Of Utah time trail. The 14.5 km race be run in the early evening using a 16 turn layout on the motor course pavement. Past winners at Miller include Levi Liephiemer (The Shack) and Jeff Louder (BMC)

New for 2011, an 11 lap race has been designed to run through the historic Capitol District. With 2200 meters elevation gain (and loss) the 131 km stage runs from the State Capitol, through the Avenues section of Salt Lake City to the University of Utah on the east bench. A flat run west on South Temple returns the riders A sharp ramp up State Street to the capitol. Long stretches of tree lined venue will make this stage a crowd pleaser.

Returning unchanged for the 4th year is the Queen Stage of the Tour Of Utah. Beginning in Park City's New Park District, the route journeys around Summit and Wasatch Counties on it's way to a date with the narrow winding road to the top of the Alpine Loop below Mt. Timpanogos, near the Sundance resort. A twisting decent of American Fork Canyon back to the valley floor on the west side of the Wasatch Range.

From the town of Alpine, the route goes over the Transverse Range at Suncrest. A high speed downhill run into the south valley at Draper, sets up a gradual ascent to the base of Little Cottonwood Canyon. A 900 meter climb in 5 km, at grades of 8-12%, concludes a long week in the saddle for the race winner. Finishing at Snow Bird Resort after 161 km and 3300 meters of climbing is enough elevation gain for many races. At the Tour of Utah that's just the final day. In all at the end of the five days the winner will have completed nearly 8000 meters of climbing and ridden close to 650 km in northern Utah.