Everyone’s had a day around Rome and a chance to do all the sightseeing sort of things, but now it’s time to get to work. And just to emphasise how this isn’t going to be an easy ride, stage 1 from Rome to Velletri starts and ends on cobbles. This how the organisers describe it:

The Giro Donne leaves Rome. The capital, la Citta Eterna, and the symbol of the unity of Italy, but also a necessary journey for a true Giro d’Italia. The heart of Rome will come out to applaud the athletes and the entire caravan of the Corsa Rosa. The race then, as soon as it gets beyond the streets of the Italian capital, heads towards the South. Towards the hills of Castelli Romani where it reaches after eighty-six kilometres the citadel of Velletri. The citadels that surround Rome are are fertile grounds, rich in history and wine. We cross Castel Gandolfo, Albano Laziale and finally, just before Velletri, Ariccia and Genzano di Roma. A shortish stage to try out the condition, but not to conceal a profile that on the map is able to give an early boost to the most daring attackers, particularly in the finale when the entrance to Velletri offers beneath the wheels of the women an attractive climb, ideal for making the definitive acceleration. Nothing appears obvious or predictable, right from the start. The sprinters will have to work hard to reach the first finish line and their teams will have to keep the race on a tight thread, particularly in the finale.

On paper it’s a great stage, leaving Rome by the most beautiful way out, passing through little towns whose names you will recognise if you ever read Livy’s Early History of Rome as being one-time allies, enemies or both. At 36 km it reaches the high point of the day as it crosses the hill at Castel Gandolfo, best known as the site of the Pope’s summer residence, before descending slightly to Velletri, where they will build the distance and test the legs a little with four laps of a short circuit just outside town. That circuit shows a little bump on the profile, but according to the race handbook it is only 40m over 3km i.e. just over 1%, i.e. nothing. But then comes that final ascent up Corso della Repubblica, of some 250m at 12%. And it’s pretty narrow too. The only thing not in its favour is the tendency for the peloton to ride the first stage of the Giro Donne very very conservatively, whatever the parcours. It might look like a good stage for a break, but that's not going to happen. 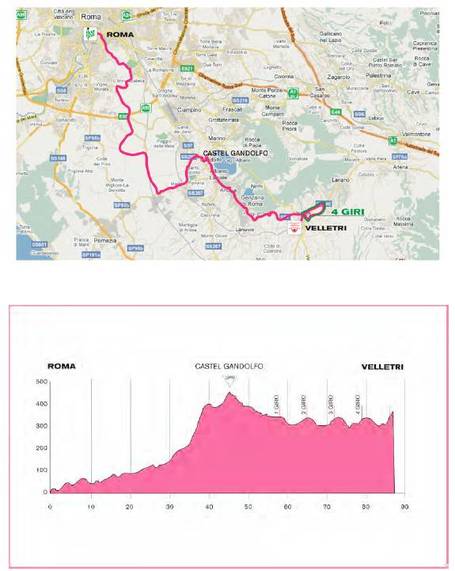 And as I predicted Vos for the win, the big question is who’s might beat her today? Well this is the sort of territory that we’d usually expect to see Emma Johansson as her main opponent, and maybe Nicole Cooke or Giorgia Bronzini in the mix too. If you want to offer your own prediction then you’ve got until around 15:00 CET tomorrow to do it honestly.

Profile and map via www.girodonne.it