Jetse Bol's Big Fortnight: A Look Inside Olympia's Tour and U23 Paris-Roubaix

Share All sharing options for: Jetse Bol's Big Fortnight: A Look Inside Olympia's Tour and U23 Paris-Roubaix

Last weekend Rabo Continental's Ramon Sinkeldam won the U23 Paris-Roubaix classic, capping off a brilliant run of results for the Oranje Beloften. We had a brief story then, but thanks to the miracle of electrons, satellites, and the Apple Computer Co., we've got a more detailed description of events straight from Sinkeldam's illustrious teammate, Jetse Bol. A week earlier it was Bol who won big, taking the Olympia's Tour overall with a final stage victory engineered in dramatic fashion by his team, with no small amount of help from Sinkeldam. So when Sinkeldam found himself in position for his own iconic U23 success, Bol was there to help make it happen (finishing 7th while he was at it).

PdC: Can you describe the course for the U23 Paris-Roubaix and how it compares to the Pro Tour version? What are the hardest sectors? What are the most decisive points in the course? 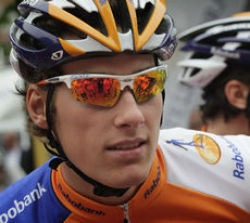 40k of the race because all the riders start getting very tired of the hard roads, so that is the time when you can make a real difference in the race.

PdC: How did Rabobank plan for the race? Were you the leader or was Ramon, or both? Others?

Jetse: We didn’t have a clear leader for the race, because all the riders of the team were in a very good shape and this is a kind of race where anything can happen (crashes, flat tires… etc) so we didn’t put all our cards in only one rider.

PdC: There was 50km to go when the winning group got away, yes? What was your role with Ramon up the road?

Jetse: I don’t quite remember how many km to the finish we had when the winning group got away as I was focused only to get back into the front; I was in the breakaway since the start of the race then I had a flat tire and had to change wheels again later in the race so it took a lot of energy and time to finally get there. Ramon was in a breakaway later in the race and I was in a chasing group, when we caught them I got in another break that was caught back and after that there was a counter attack (with Ramon in it) that finally was the decisive group that made it to the finish. I was in the second group and only had to control to make the break stay away. Then I attacked with another rider and we picked up one of the riders from the original breakaway and rode with them to the finish line.

PdC: Was there an organized chase in your group?

Jetse: No, because most of the riders were too tired to ride hard or had a teammate in the front like me.

PdC: Olympia's Tour: Congratulations on your win!! This was a big result for you, right? You won in 2009 too but this included two stages. Was this your best result?

Jetse: When I won it in 2009 I was not the race leader, but it was very special because we (Rabobank) won the Team Time Trial and that was my first victory ever with the team, I was riding in every breakaway and getting time bonuses, of course I had a big desire to win it but I think no one was expecting that victory (including myself) it was a great experience and my first big win. This year I was in a whole different situation, obviously I’ve been working very hard and my form is better than two years ago, I’m also more experienced and I knew the race pretty well, but it was hard because people were expecting a lot from me and I had a bit of pressure in my shoulders. The overall win was never secure till the last day, I didn’t do so well in the prologue and I started the 1st stage 13 seconds behind race leader, I won the first stage and all the bonification sprints in order to take the overall lead but the gap was very close, I lost the jersey in stage 4 to Wim Stroetinga, that day we had two stages: a road race and a Time Trial, Wim then lost the jersey to Hepburn in the 12k TT, that race was decisive as I was very tired for sprinting every day and I lost many seconds finishing in 5th place in the overall, 17 seconds from the race leader so the whole Rabobank team had to fight the whole way in the last stage to take the jersey back home and against all the predictions we did the impossible and took all the classifications from Olympia’s Tour which was pretty impressive, the whole team was very satisfied and proud, I could have never done it without such a great team.

PdC: The final stage sounds very dramatic, you escaped with two teammates on the Eyserbosweg and stayed away for 90km. Can you describe what happened? 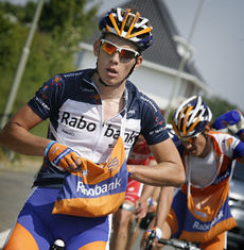 Jetse: The GC was very complicated as we only had one stage to go and I was 17 seconds behind the race leader and all the other stages were finishing in bunch sprints, but we were not willing to leave the race without giving a real fight. As we know from previous years the Eyserbosweg is a very hard point of the race that can make a big difference in the peloton, so the plan was to attack there and try to get away if possible. It was perfect. We did exactly what we had been told to do, everything worked out perfect, the Australian boys (Hepburn and Dubridge) were not in a good position in the peloton at that point of the race which helped us to build a bigger gap with the peloton. My teammates were very strong and helped me all the way through the finish line and I could win my second stage of the race and by taking 46 seconds to the peloton I also won the overall classification along with the sprints, points and mountain classifications.

PdC: Was this the plan all along or did it just sort of happen on the road?

Jetse: The plan was always to attack on the Eyserbosweg, we didn’t just wanted the stage victory, we were there to win the whole race and play an aggressive role in the road. By doing that we didn’t only win the stage or the GC but all the other classifications (Tom Dumoulin won the youth classification). This result as a team is very important, I’m very proud and happy to be part of such a good squad.

PdC: A week earlier Ramon was helping you win, was your role in Paris-Roubaix payback to him for helping you?

Jetse: No, it was not my role at the start of the race. As the race was going on and the situations were happening and he was in a better position than me to win it, then I gave everything I could to make it happen. I’m happy that it’s another big victory for the team.

PdC: You must be pretty tired after this bloc of big races. What's next?

Jetse: I have a break after June. The next big goals are the National Championships (TT and Road Race) and Thüringen Rundfahrt.

PdC: Any more thoughts about next season or is it too soon to say?

Jetse: The only thought that I have in my head is that I want to become Pro next season.

Pictures of Jetse and Ramon courtesy of Rabosport.nl