And in other news

Share All sharing options for: And in other news

Some snippets of information from the world of bike that may have gone unnoticed. Feel free to include other news in the comments. 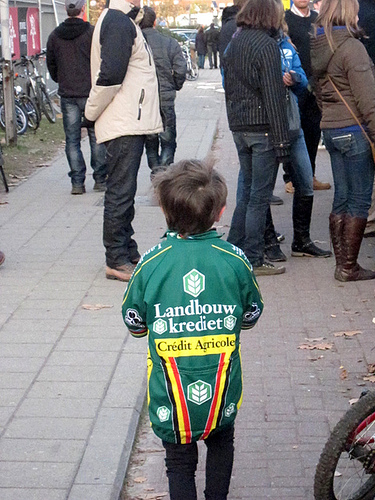 Picture by tgsgirl, at the 2010 Hasselt CX

Landbouwkrediet - the Belgian continental team of, among others, cyclocross god Sven Nys, HTFU-master extraordinaire Bobbie Traksel and Lithuanian sprint sensation (in 2014) Aidis Kruopis - is suffering fom all different kinds of misery at the moment. Frédéric Amorison was involved in a bad crash in today's 1.1 Tour de Rijke. He landed face first, and was taken to hospital bleeding profusely. First assesment is broken jaw and broken wrist, but we should know more soon. This is the fourth rider out for the 24-man strong squad, after Sven Nys (knee), Sven Vanthourenhout (elbow fracture) and Bobbie Traksel (hand).

No more HTFU for Bobbie?

Speaking of Bobbie Traksel, he fears his career may be over. The winner of the 2010 version of KBK (yes, that KBK) crashed during training in April, breaking his left hand. Earlier this week he gave an interview to Dutch newspaper De Telegraaf, in which he admitted that his hand still hasn't healed, and may never heal. After the fracture his hand swelled up, blocking and ultimately killing off a nerve. As a result, Bobbie - one of Pegagus' victims - has no feeling in his left hand, and doctors don't know if it'll ever come back. The nerve that needs to grow back is over 10-15 cm, and apparently, nerves grow with an average speed of 1mm a day. "Cycling is out of the question right now. I can't break, can't shift gears, can't hold my handlebars."
I know from personal experience that damaged nerves can take ages to heal, but I also know from personal experience that sometimes, they just don't. Sorry Bobbie, hope you heal up soon.

For some happier news then, let's take a look at the results of the aforementioned Tour de Rijke. The race ended in a bunch sprint, and the bunch sprint ended with Theo Bos crossing the line in first. This win brings the trackie-turned wrestler-turner road racer's total for 2011 up to ... three, after winning two stages in Oman. Well, it's something, right? QST's Chicci managed to be outsprinted by a cyclocrosser. Lil' babyface Tom Meeusen is a great racer in great shape - he won the second leg of the Belgian MTB cup on Thursday - but come on Francesco. Can you at least pretend to be a sprinter?

What is that, the least surprising headline ever? Must be up there with "Fränk crashes" and "Benna lusted after". Anyway. The great PhilGil managed another win, in a crit in Calais. He wasn't the only big name there, but imagine lining up for your local crit with Phil by your side.

No Nuyens in TdF? 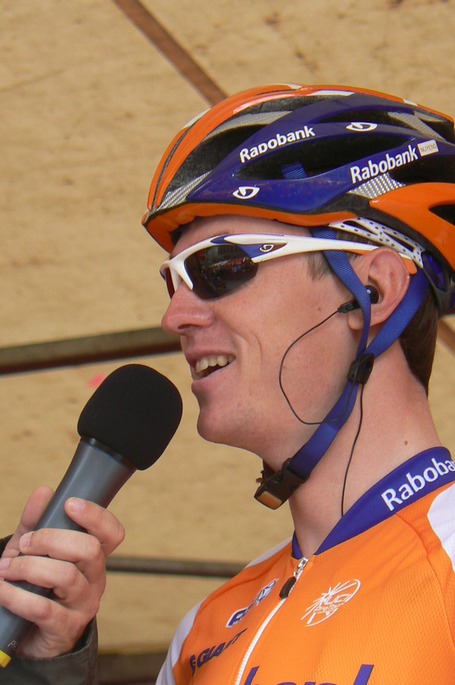 The 2011 RVV winner doesn't think he'll go to France this summer, unless for maybe a holiday. "We have to consider what is best for the team", says Nuyens to Sporza. "If they ask me to go, I'll go. But I think it's best to send others guys. My wife Evy is due to give birth around 21 July, so I'd have to quit the Tour prematurely anyway."

(contrary to that picture above, I'm sure you all know Nick's team is bank Saxo and not bank Rabo these days)

Albasini versus the dopers

Albasini did well for winning the GP Aargau in Switzerland today, and he did even better for kicking some candy-eating asses. Go Alba!

Ted versus the pavement

And finally, the King of Style raced in Philly today. For a little bit.

iamtedking
Storm grate, pavement, and an enormous crack between the two. 30mph to zero in the blink of eye. At hosp' now for x-rays and junk. Uugh.