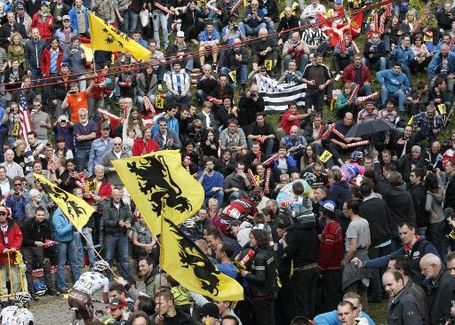 Installment number two in this brief series checks in at the mid-point on the Pro Tour teams from Belgium, the Netherlands, Luxembourg, and what the hell, Denmark. Sure, you have to hop over or around Germany, but I already covered Die Mannschaft. Oh, and this is probably a good time to mention that this format can work rather nicely on, say, some of the U23 teams or Continental squads, if someone has the time and info? I wouldn't say no to a Topsport Vlaanderen review. OK, getting started...

Top Stories: The Gilbert Rampage. We all knew it was coming, that one autumn rampage wasn't going to be enough for a guy who looks like the picture of a spring rider. But... the Ardennes Triple, plus Brabantse Pijl, and the streak is still going on, if you want to jump straight to the overall classification in the Tour of Belgium rather than focusing on the two stages he didn't bother winning. Jurgen Roelandts was quite excellent this spring, taking second at the E3 and 14th in Paris-Roubaix, rolling in amidst the Hushovd group. Bart De Clercq's stage win on Montevergine paid the entire team's expenses for the Giro d'Italia.

Stories to Watch: Andre Greipel has about another six weeks to shed the small shit races label. Looking at his five wins, I still say his best result was 21st in Paris-Roubaix. All Flemish eyes will be on Jurgen Van Den Broeck in the Tour to see if he can match or best his fifth from 2010. Oh, and I suppose the Belgian media aren't breathlessly speculating on Philippe Gilbert's post-2011 contract every three hours on the hour for nothing. If OP-L haven't said anything by the end of the Tour, assume the worst (for them).

When I Look at the Television I Want to See: Everything just as it is. No doubt at least one OP-L employee has been assigned to wait in the window of the head office and look to see if a helicopter full of money is headed their way. Gilbert is the formula. Subjects like "finding him a little more support in Flanders" really aren't worth discussing until the first question is answered.

Top Stories: Lack of wins. The bar is high for Patrick Lefevre's boys, at least in spring, so Nokere-Koerse and Gent-Wevelgem aren't enough palmares to declare success. But Sylvain Chavanel was fantastic, Boonen was generally good enough to win, and, well, it's the classics. Shit happens. Anyway, we've beaten their stories to death already this spring.

Star So Far: Besides Styby, you mean? That would be Tommeke, with a nice assist from Chava. It's tempting to blow off Boonen when he doesn't win everything in sight, but by any reasonable standard he was excellent, at least until halfway into the Trouee d'Arenberg when fate's fickle finger caught up to him, at long last, and with prejudice.

Stories to Watch: Speaking of luck, can Boonen actually have some of the good kind at the Tour? It's been about four years since that happened, and I like to remind people (every year) that the last time a fully fit Boonen showed up at the Grand Depart, he came home in green. Given that Boonen is riding for a contract, this is a big deal. Chavanel is also one of the few riders who you can point to in a field of 200 + hopefuls and say, that guy's probably gonna win a stage. Oh, and Gerald Ciolek was mixing it up with the big boys in the Giro sprints. Is the light coming on?

When I Look at the Television I Want to See: Dare I say it... Gilbert in QSI colors. The Belgian media is talking of him being too expensive for any of the local teams to afford, but maybe, just maybe, QSI's eastern benefactors have deep enough pockets. Maybe Lef is feeding the media some transfer season sandbags. Maybe the classics peloton goes through a massive round of musical chairs, with Gilbert landing at the Belgian Superteam, and Boonen either staying (did I say superteam?) or filling the void at one of the American classic-dreaming teams (e.g. Garmin if Thor and Barbie leave). Anyway, Quick Step's offseason menu includes re-upping the cobbles squad and swinging for the fences with a GC guy or another big Tour stage threat.

Top Stories: Seb Langeveld's win at the Omloop was one of the bigger results of the spring, from a team perspective. Rabobank are still slowly melding into a young, strong, do-it-all squad, but it was getting to the point where us IFPs were needing to see some results if we're to keep writing the first half of this sentence. Actually, there are a number of big changes on that front: 16 wins is more than double what they scored last year by this time (7). More importantly, though, Oscar Freire is only responsible for two of those victories (last year he'd racked up six of the seven first half wins, none very memorable MSR and some SSRs). Michael Matthews and Theo Bos have replaced that production, including quality (for Rabo) wins at the Rund um Koln and Tour de Rijke. Lars Boom is also the world's second-best prologue rider, as well as a player in the spring monuments, and two stage wins plus Peter Weening in pink made for a very nice Giro. Oh, and they couldn't pull off anything in Amstel again.

Star So Far: Not sure how you pick one. Langeveld was pretty frisky in de Ronde too. Bling looks like a huge winner, starting right now. Weening's Giro probably ranks as the biggest sponsor payoff. Hell, the TTT win is symbolic of what Rabo are up to this year.

Stories to Watch: Robert Gesink's Tour de France campaign, which is enough to make me forget about the Contador Quandry. I'm not sure about the last couple days, but up til then it's a great course for him, especially with Rabo looking fast in the TTT. If he's close to the lead, Dutch Mountain will be an unbelievable scene (cue family camping outing plans for 22 Juillet...). LuLu Sanchez's Tour is a bit harder to handicap, but he should be fantastic in the early climbs and the TTT. Matti Breschel's comeback is the other big story brewing. He's the odds-on favorite to finish second to Gilbert in the Worlds RR.

When I Look at the Television I Want to See: All the same familiar faces in Oranje. Well, minus a few guys, to make room for some of the kids (Jetse!). Langeveld's rumored departure is actually just what they need. Every aspect of this team is stocked -- look at the climbing squad now, led by Gesink with LuLu, Kruiswijk, Mollema, Ten Dam, guys like Slagter and Wilco Kelderman coming up... The challenge is simply keeping the fruit from getting picked by someone else, just as it's ripening.

Top Stories: If you focus on the headlines, you could summarize their season in a word: gah! The Ricco mess was ugly and Stijn Devolder was a major classics flop. Underneath the top line, however, things aren't nearly so bad. Romain Feillu has racked up the world's fourth-highest win total (8), albeit in mid-sized venues. Matteo Carrara's top-20 Giro campaign was a long time coming. Bjorn Leukemans is Philippe Gilbert without the wins: 7th in de Ronde, 7th in Amstel, 9th in Liege, second to Gilbert in Brabantse Pijl. Awesome run this spring. Thomas De Gendt gave the squad a few days in Yellow in Paris-Nice. Hoogie showed in the Giro he's always fun to watch.

Star So Far: Feillu. Wins are currency in this sport, and he's the difference between a nice account and a bankrupt one.

Stories to Watch: Free Zeke! In theory Vacansoleil have a fine rider for the Vuelta. How Devolder responds to the loss of his good friend Wouter Weylandt is another important matter, and the early returns aren't good.

When I Look at the Television I Want to See: Leukemans with his arms raised in celebration. Also, they should be in the business of stealing climbers from the Rabobank system. Building up a grand tour team, which is what they asked for the chance to do when they went Pro Tour, isn't gonna happen quickly or through gimmicky signings like Ricco.

Top Stories: Winning the Giro d'Italia was a brief happy moment for Alberto Contador, though it seems to be quite thoroughly over already. Team-wise, the real success was the smashing return of Ronde winner Nick Nuyens, the only non-Bert Saxo man to score a victory this season. I've given Riis plenty of props for his body of work, but in truth Saxo haven't done much outside of Flanders to crow about. I mean, the Contador plan, how hard is this? Hire the guy, hand him a bike, and get your lawyers working on his race starts, then you're (inhale) smoking all the way to Paris. Woops, Jens isn't here anymore.

Star So Far: Take a wild guess. It might be fun to argue who's more dominant at their craft, Gilbert or Contador. But arguing who Saxo's star is? [Yawn]

Stories to Watch: Apart from the Contador mess, Richie Porte's Tour debut should be pretty intriguing, albeit limited (probably) to stages, with or without Bert in tow. Also, if and when Johnny Bellis' comeback takes flight, that would be some pretty positive news. Oh, and what does Denmark's biggest team ever do to help bring home a world title on the streets of Copenhagen? Not sure, actually.

When I Look at the Television I Want to See: Contador set free to ride. IIRC he's on a one-year deal? Given his dented brand (fairly or not), Saxo could and probably would hitch their wagon to him for good if CAS clear the Spanish uber-champion. Plan B is for Contador to get banned, Saxo drop him, and rebuild a completely different team with the money. Either way, you know. No biggie.

Top Stories: Tragedy has darkened the team's doorstep to the point where it's hard to call anything else a story. But since we must carry on, the other news has been the Stop Cancellara Movement successfully enacted by, um, everyone else last April. Not in March, mind you, when he sauntered off from the E3 peloton in devastating fashion. One or two more spring campaigns are needed before we can decide whether it was the negative tactics that ground him down or whether Cancellara himself simply couldn't be 2010 Tony Spartacus every year.

Star So Far: Cancellara. This is the sport's pre-eminent Tour-only team right now, so the other big names have mostly laid low. Cancellara was on everyone's lips for a month, and what the hell, getting on the podium of the season's first three monuments is nothing to apologize for.

Stories to Watch: It's all about the Schlecks from here on out. Even with Contador on hand, they should have a fantastic Tour squad with guys like Monfort, Gerdemann, Voigt, Feillu (the skinnier one) and O'Grady (maybe) on hand. Perhaps Daniele Bennati has a grand tour points campaign up his sleeve, as he seemed revived early on. Wouldn't be so bad if Jakob Fuglsang got it going too. He and Cancellara will have something to say in Copenhagen too.

When I Look at the Television I Want to See: Happier times, just guys racing bikes. I doubt they'll make too many big moves, unless they're interested in becoming the Yankees or Man-U of cycling and they make a play for Gilbert. If you believe the scenario where he's leaving Belgium for big, big money, this one is plausible, at least if Cancellara is serious about changing his emphasis next year.