Half Way Home: and the Rest...

Share All sharing options for: Half Way Home: and the Rest... 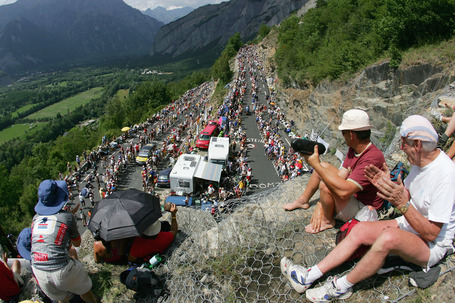 Time to put this to bed so I can focus on how much cooler the Tour de Suisse is than the Dauphine...

Top Stories: Thank God for Gadret. France's biggest-budget team, its lone entry in the World Tour (seriously, WTF?), would be winless since winter if not for Gadret's Giro stage victory at Castelfidardo. Gadret also placed an outstanding fourth in the overall -- begging the question, what the hell is he doing emptying his tank at the Giro? Not that I'm complaining, mind you; Gadret and Hubert Dupont put on a very respectable show, contrary to what's normally expected of French riders on French teams in Italy. Total no-shows in the Coupe de France. I have no idea if that's by design, but you'd think taking care of business at home would be among their priorities. Or, not being completely outgunned by Europcar (17 wins).

Star So Far: Gadret, for sure. He even forced Irish Peloton to write a post about whether Nicholas Roche is worthy of Tour leadership. Blel Biel Blel Dave Kadri and Anthony Ravard are the team's points leaders.

Stories to Watch: How they represent at the Tour. It's tempting to view the Dauphine as a preview, and there AG2R have a plethora of guys led by Christophe Riblon, a Tour top-20 candidate, leading the parade. Basically, they should get a few guys in the top-20 mix on GC, but would dearly love a couple stages along the way.

When I Look at the Television I Want to See: The next French Climbing Sensation, whoever that is.

Top Stories: I'm not sure what standard to hold them to; they seem to have willingly taken a leave of absence from the cobbled classics, taken a few shots in the Ardennes, then put their top guy in the Giro, which makes you wonder what their plan is for the Tour. Roman Kreuziger still can't live up to his "small motor" criticism of Vincenzo Nibali, who just beat him in the Giro by four and a half minutes. Indeed, if anything sums up their first half, it was Paolo Tiralongo being gifted a win by Contador, the former Astana leader. If only it were still 2010.

Star So Far: Alexandre Vinokourov. Vino was good in La Fleche and better in Romandie, so his swan song is off to a nice start.

Stories to Watch: Remy Di Gregorio set French hearts aflutter with a stage win in Paris-Nice; can he pull off something along similar lines at the Tour? Will Kreuziger have anything left to offer Vino in support at the Tour? Can Vino go out with a bang, someplace?

When I Look at the Television I Want to See: A rebuilding project. The Contador/Bruyneel dalliance was short-lived, and just barely survived by the last gasps of national hero Vino. Kreuziger was a good signing but they need to stop being a few guys' vanity project and focus on building a complete team.

Top Stories: The only team to put Contador under any pressure at the Giro. OK, maybe not pressure, but they did nab a couple stages off the guy, on two immensely difficult days. These kind of wins are exactly what thrills the Basque fans. They also scored wins at the GP Miguel Indurain and a stage (but not the overall) of the Pais Vasco. This is shaping up to be a big year for the Carrots.

Star So Far: Nieve, I suppose, since he hung around the overall classification race longer than Anton. After finishing in the same place (11th) in last year's Vuelta, it's safe to say Euskaltel have another threatening lieutenant for Anton and Sammy Sanchez.

Stories to Watch: Samu's latest Tour-only go-round. He was fantastic last summer, just off the podium, so I heartily endorse this approach. Probably a bigger story though will be Anton's Vuelta, since he was the consensus strongest rider before crashing out in 2010, and since motivations at Euskaltel will be off the charts, with the Vuelta not merely returning to the Basque region for the first time since forever, but heading there for the final few pre-Madrid stages. Talk about Euskie fairy tales... just this once, I think the Tour may be a smaller objective for the Carrots. Personally I'm very intrugued by Romain Sicard's Tour debut, assuming it happens in 2011.

When I Look at the Television I Want to See: Orange arms raised in Vitoria. Carrot bliss...

Top Stories: Frustrating season so far for the Russian Rockets. They were completely loaded for the classics, and got next to nothing out of it. J-Rod bravely dropped his Tour dreams for clear shots at the Giro and Vuelta, and while the second chapter isn't written, the first one didn't even end in a podium, on what you'd think was an ideal course. [N.b., the Vuelta doesn't have a time trial after stage 10, so...]

Star So Far: Dennis Galimzyanov. Big winner on the Asian circuit starts to translate that into some European results, with sprint victories in Lux and De Panne. Still got a ways to go, but that's a nice improvement for the 24-year-old now in his third go-round on the big squad.

Stories to Watch: If Rodriguez can survive the Salamanca time trial, he'll be a big potential Vuelta spoiler for the carrots. Can they make any impression at the Tour, led by Vlad Gusev? Can Kolobnev finally polish off his fall campaign with a true signature win?

When I Look at the Television I Want to See: Some leadership. It's not easy to groom or grab a top-champion-level cyclist off the shelf nowadays, even with trunkloads of rubles to spare. The J-Rod gambit was sound, but even he recognizes his ceiling (Vuelta and La Fleche). The team is pretty deep, so if they can snag a main guy, the Russian Cycling Project will perhaps live up to their budget. If they don't have Gilbert's agent on speed-dial, someone should get sacked.

Top Stories: The Michele Scarponi signing has paid huge dividends for the Pink Boys, with Scarponi winning the overall Giro competition for staying closest to Alberto Contador -- a category worthy of a jersey. Diego Ulissi has made a huge impression with the stage win in Tirano and second on the final day of Paris-Nice, the Col d'Eze stage. Petacchi is still Petacchi.

Star So Far: Scarponi, whose palmares include a stage of Tirreno-Adriatico, the Giro di Sardegna and the Giro del Trentino. He wins up and down the boot.

Stories to Watch: What exactly is Cunego's plan again? Stage wins at the Vuelta? Their biggest remaining hopes rest largely on Petacchi, who can either hunt for stages or Green at the Tour and might have a say in Copenhagen too -- not Lampre's job but they'll take it.

When I Look at the Television I Want to See: A bigger rivalry with Liquigas. Head to head, team versus team, on the roads of Italy. Contador kind of distracted us from that, but there's always next year.

Top Stories: Kind of a quiet spring for de Gaas. Peter Sagan does a lot of things very, very well, but riding on the cobbles isn't one of them -- yet. They have to be disappointed with the Giro, even though Nibali rode well on a course that didn't suit him especially and the team looked quite strong when needed. Such is life when you win two of three grand tours the previous year, one in utter dominance.

Star So Far: Sagan. Seeing him and Goss duking it out in Thousand Oaks was a nice reminder that Amadio has to drop that nonsense about Nibali winning MSR and throw the team behind Sagan.

Stories to Watch: Pulling a reverse-J-Rod, Liquigas have kind of doubled down on the Tour, a logical step after last year's Giro. I was initially dismissive of Basso's chances against the Schlecks and possibly (especially) Contador, but if they can ride as strongly as a team in July as they did last May, they could make a powerful impression. Another interesting story line would be how Sagan and Oss could double-staff the maillot vert -- provided Amadio can afford to take two sprinters. In any event, Sagan would be brilliant in the rolling stages which define the first week of the Tour.

When I Look at the Television I Want to See: No real changes. Sylvester Szmyd pounding the pedals on the front of the peloton, headed up to the Alpe. Make 'em hurt.

Top Stories: Like Leopard, the sadness engulfing the team upon the tragic death of Xavier Tondo has blotted out whatever else you might want to discuss. Tondo was riding very well for his new team, winning the Vuelta a Castilla y Leon, before his accident. Francisco Ventoso has been at his very best this season, with five wins.

Stories to Watch: Whether they turn things over to the kids. Branislau Samoilau and Rui Costa can both climb, while Ignatas Konovalovas has a big time trial engine. Ventoso should be taken seriously at the worlds, since he sprints well after hard stages. Nobody else seems suited to leadership, and anyway they're just holding places for the return of Valverde.

When I Look at the Television I Want to See: Rui Costa making the leap. Please, give me someone to root for here before Valverde comes back.

Top Stories: The usual array of sprinters notching occasional wins, with Henderson, Sutton, Cummings and now Ben Swift making things happen. Geraint Thomas' cobbles campaign was shockingly good, making up for Flecha's strong but unrewarding turn. Edvald Boasson Hagen's wasn't particularly good, nor were his physical ailments very shocking, though the continued slowing of one of the biggest talents on Earth remains news until it stops... whereupon he will start making different news.

Star So Far: Swift or Thomas, take your pick. Thomas for me. I had no idea...

Stories to Watch: With Bradley Wiggins looking very good at the Dauphine, his Tour campaign becomes intriguing again, notwithstanding last year's debacle. It happens. The inevitable Cav-to-Sky talk should head up soon, although one look at the roster would tell you that they don't exactly need help in the sprinting department. Rigoberto Uran could be fun to watch as he chases the maillot blanc, or maybe another Colombian stage victory.

When I Look at the Television I Want to See: Cav somewhere else. So he's British. So they're British. So what? I mean, if they have unlimited resources, or if Sutton and Henderson go off to the new Aussie team, then it makes some sense. But Sky are building a nicely rounded team and it would be a shame to see all those resources go to a sprinter. Even the sprinter. OK, there's about a zero percent chance of them passing on him if he's available so screw it.