Stage 1 ended in the expected bunch sprint where the only minor losers were Mara Abbott and Claudia Hausler who dropped 15 seconds when a gap opened up in the peloton as it crossed the finish line. That’ll be irrelevant when the race reaches Turin. Actually there’s a pretty good chance that it will be irrelevant by the end of tomorrow. Stage 2 travels in a large circle, starting and ending at Pescostanzo, but en route descending then re-ascending almost 1500m, including the first category 2 climb of the Giro. The men’s Giro ended here in 2008 on what looks to be the same finish line, but the women will be arriving from the north and Piazza Municipio. The organisers reckon that tomorrow will be a good day for a breakaway, but I can’t see that happening so early in the race. Expect the favourites to come to the front:

The Giro Donne returns to Abruzzo after a gap of just two years. In 2009 the departure was from Fossacesia on the Adriatic Riviera and the conclusion with the victory of Noemi Cantele in the heart of the Molise at Cerro al Volturno. After the arrival at Velletri, the second stage offers a hectic day from Pescocostanzo to Pescocostanzo. Up and down through the Abruzzo mountains, going straight to the heart of the National Park of Maiella, another jewel for which the whole world envies Italy. Ninety kilometres, the first forty without particular difficulty, then the descent towards Sulmona. The final fifty kilometres will be a real race, with the ascent to Campo di Giove and Villaggio Sant’Antonio, and the finale at Pescocostanzo presents once more a climb to the entrance to the town centre. [… sentence that I really don’t understand..] The leaders can ride protected but need to pay heed to the front of the race. 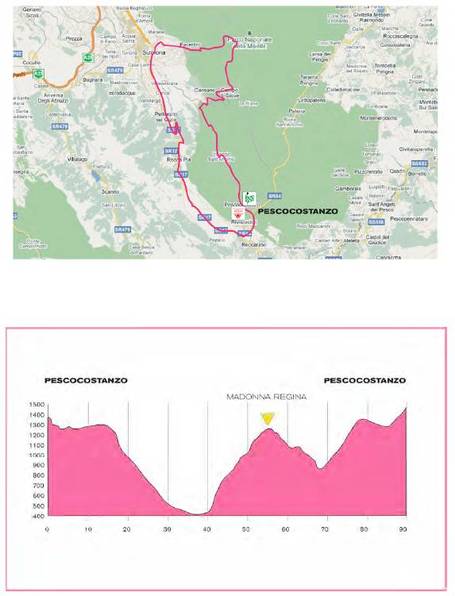 And here's the roll of honour from that day in 2008. Let's hope that tomorrow's top ten brings back a bit of honour to Pescocostanzo.