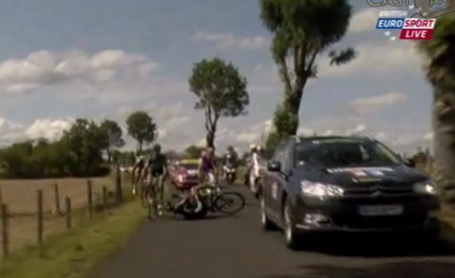 Rabobank's Luis Leon Sanchez won from a three man breakaway to cap a terrible, horrible, nasty day in the Tour de France which saw gruesome injuries and unforgivable nonsense. He outkicked breakmates Thomas Voeckler of Europcar and Sandy Casar of FDJ, though Voeckler ends the day in the overall lead.

The most important story is the loss of Astana's Alexandre Vinokourov and Omega Pharma-Lotto's Jurgen Van Den Broeck, both of whom ended the day in a hospital with broken bones after a large pileup on a narrow, wet descent. Vinokourov, the iconic, highly decorated Kazakh star, flew into the woods and left with at least two broken bones.

But the story that everyone will be discussing happened in the five-man breakaway that had been on the gallop for much of the day. With some 30km to go a French TV car swerved into the breakaway while attempting to pass them, sending maillot-a-pois leader Johnny Hoogerland flying into barbed wire and causing Juan Antonio Flecha to hit the deck too. Neither rider rejoined the front group, and Hoogerland, looking dazed, slipped well behind the peloton. Watch it here. Notwithstanding the crash, Hoogerland will be in the polka dot jersey tomorrow, assuming he's OK to continue.

An almost forgotten incident happened earlier where Katusha's Vlad Karpets may have shoved Saxo Bank star Alberto Contador off the road. Grainy video is inconclusive and the identity of the riders may be a rumor but there was clearly a shoving incident which the race jury will deal with.

Anyway, the result means that Voeckler heads into the first rest day in the maillot jaune. Garmin-Cervelo attempted to bring the race back until about the 10km mark, when reality set in.  Philippe Gilbert of Omega Pharma scored more points to extend his lead in green. Results:

Hoogerland is in spots! Gesink hangs in for the white. Full results here.