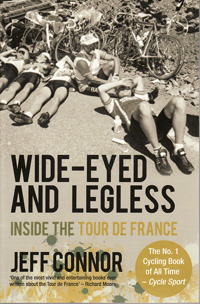 Jeff Connor's Wide-Eyed and Legless tells the story of the mis-adventures of the hapless ANC-Halfords team in the 1987 Tour de France and how Tony Capper's dream of Britain as a nation of cycling fans turned into a living nightmare on the roads of France. Despite having been out of print for most of the past two decades Wide-Eyed And Legless has become something of a legend within the British cycling scene.

Mainstream Publishing - the people behind titles such as Graeme Fife's annually-updated history of the grande boucle, Tour De France: The History, The Legend, The Riders; Paul Howard's Jacques Anquetil biography Sex, Lies and Handlebar Tape; and Matt Rendell's Olympic Gangster - have put Connor's book back on bookshop shelves and have now teamed up with Podium Café to give you a chance to win your own copy of Connor's book.

In that 1987 Tour, ANC-Halfords riders held the lanterne rouge for ten days running during the first half of the race. So this competition is going to be based around this year's race for the red lantern. Coming into today's rest-day, Europcar's Vincent Jérôme is the tail-end Charlie bringing up the rear of the peloton, 1h 28' 50" behind his team-mate Thomas Voeckler in the maillot jaune. But with the Pyrénées now rising up in front of the grupetto the race to the bottom is really going to heat up and Jérôme could quickly find himself unseated, like a jockey over Becher's Brook in the Grand National. (Please, no jokes about horse tranquillisers. It's not big and it's not clever.)

All we want you to tell us is who you think will be the lanterne rouge when the race exits the Pyrénées (ie at the end of Saturday's stage fourteen to Plateau de Beille). But you have to tell us this before the race enters the Pyrénées on Thursday morning.

As a tie-breaker we want you to predict the time-gap to the maillot jaune. If multiple entries have the same name, the prize will go to the one nearest the actual time-gap. If no one gets the rider right, all entries got into Serendipity's hat. But that's, like, so unlikely to happen - this is Podium Café and no one knows cycling like what we do.

You've got two ways of entering this competition:

1) stick your pick and time-gap in the big white box at the bottom of the page. (Not registered to comment? Rectify that here.);

As Mainstream Publishing have given us two copies of the book to give away, we're going to pick two winners: one from the comments' section and a second from Twitter. So feel free to double your chances of winning a copy of the book by entering via both the comments' section below and via Twitter. You can even pick different riders for each entry if you want to hedge your bet.

If you need help figuring out what's going on at the bottom of the race check out Race To The Bottom (there'll be an update along tomorrow - like the race to the bottom itself, I'm taking covering it slowly). I've also posted some lanterne rouge stats for you (stats! The things I do for Podium Cafe). [EDIT: Lanterne Rouge update here.]

The usual rules apply, especially the one about the judges' decision being final. We do so hate it when, even a year after the thing is done and dusted, you don't know who won what. That is just so unprofessional.

You can keep up to date with news from Mainstream Publishing by following them on Twitter @MainstreamBooks.

You'll find a review of Wide-Eyed and Legless along with an introduction to the ANC-Halfords story and an interview with Jeff Connor on the Café Booshelf.