Racing And A Little Too Much Information In Krasna Lipa

Share All sharing options for: Racing And A Little Too Much Information In Krasna Lipa

Over the past week I have been living the high life with my team in the Czech Republic...Not. I hope you've made yourself a cup of tea or at least a strong alcoholic beverage as this is going to be a long one... And it ain't going to be pretty.

The Tour de Feminin in Krasna Lipa, a UCI 2.2, was my first race in the For Viored Brookvex colours, and a harsh reminder that I, along with most women, don't do this sport because of the glitz and glamour.

More after the flip:


For me the trip started off with a 13hr drive from Belgium to Krasna Lipa with a well welcomed pitt stop at close to 2am in a local hotel in Germany where the team and staff were able to get some decent shut eye and freshen up. Departing again just after 9am, we arrived in Czech with enough time to get to our accommodation and have a quick spin on the bikes before tea. Pulling up to the accommodation we were greeted by a 7 story run down school building. This should've served as the first warning sign for all of us to take extra precautions in relation to hygiene over the next few days...


We were staying on level 5 and the lift was so rickety and old that it could only hold 3 people at a time. We stretched the limit and would sneak 4/5 girls in but the next morning we heard that a team had loaded themselves into the lift and it had gotten stuck between floors - from then on it was strictly 3 people to the lift for us, or 2 if we felt that we had eaten too much. At 4 to a room, the dorms were actually quite big and the girls and I had thought we'd scored the good room until 11pm on the first night when we could hear a guy snoring...from the next room. This was a trend for the next 4 nights and we would rush to get to bed before our neighbor did, because if we didn't, we were in for a long sleepless night. 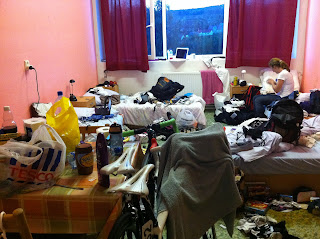 Our room...excuse the mess :s

The bathrooms were communal - toilets and showers for use by both men and women. The toilets weren't too bad as they at least had doors but I had forgotten how confident most Europeans are with their bodies until I noticed that only 2 out of the 8 showers had shower curtains. It also wasn't uncommon for you to go into the bathrooms and have a naked person, male or female, happily standing there whilst you brushed your teeth or filled up your race bottles. I'm all for feeling confident about your body but somethings are better left to the imagination... Please. I was going to try get a photo of the bathrooms but couldnt do it without feeling like a dirty perv. And nice try euros but p.s, a face washer does not classify as a towel.


Before i knew it was race day and sitting on the start line after all the debacle in actually getting my butt over to Europe, i was excited about finally starting my first UCI tour. The gun went off and for the first 20 odd k I haven't braked so much in my life. 161 nervous girls meant that positioning yourself at the front was mandatory - if you wanted to live. It took me a while to get settled in the bunch but once I did, I really started enjoying myself and remembered just why I love racing! I managed to stay with the first bunch until the final climb 3k from the finish when i dagged off the back. I rolled in just over 1min behind and in 54th place. I was quietly stoked about my performance given the circumstances and lack of racing and was looking forward to riding into the rest of the tour! What was most exciting was seeing the other Australian teams and super legend Amanda Spratt take out the win with former track sprinter Nettie Edmondson in 2nd!!! It's always nice seeing other Aussies on the otherwise of the World, and doing so well!!


Back to the accommodation for showers and dinner, we were greeted in the kitchen by yet another serving of chicken and potatoes or rice if you thought the rice from lunch would taste better a second time round. In all fairness though, it was edible.


On this trip were fortunate to have 6 staff members accompanying us. Each night Jody and Ian were the Soignys in charge of tricking our legs into thinking the day's racing never happened. Gerard from Rouleur was our own personal photographer for the week, stalking our every move for an article about soigneurs on tour ( i can't wait the see the pictures he took, they are definitely uncensored) Then there was Steev our mechanic and assistant mechanic Boudewijn and last but not least, Rene our DS.


Day 2 and on paper it definitely looked rough. We had to climb that same set if climbs I had gotten dagged on the previous day 3 times before entering a 20k flatter circuit. My goal for the race was to finish first bunch. Up the climb for the first time, dagged. Chased back on on the decent and caught up through the cars a few k before starting the climbs the 2nd time. 2nd time up the climb, dagged again. This time got into a rhythm and got over the top in the cars and so managed to get back pretty quick. 3rd time up the climb and i somehow hauled my ass over with the first group, thank god. Rode in the bunch and crossed the line at the back of the first group - one happy camper :) Aussie Jayco rider Mel Hoskins took the win with Nettie again taking 2nd spot ahead of Aussie National rider Belinda Goss! Spratty again put in a huge effort to keep the jersey.


It was from the moment we got back to the accommodation that things started to go downhill... Having dinner I instantly felt ill. Attributing it to carbooverlading, I went for my massage and laid in bed thinking nothing of it. It wasn't until 1am that I knew something wasn't right, I rushed to the bathroom and felt sick. I emerged from the toilet and saw a handful of other riders including another one of our own, Gabby Shaw sitting out front. About an hour later the German National DS walked in from the lower level and said 'oh no, not you too' - turns out there was a bunch of us who had felt the wrath of dodgey fish night at the canteen.. I stayed up crippled with a fever and stomach ache until 5am when i crawled my corpse into bed. 6am and the alarm went off for breakfast as we had a double stage and had to leave just after 7am. Needless today, I wasn't feeling it. I felt as though I had a horrible hangover, without the awesome memories from the night before - I got ripped off big time. I hadn't felt that ill for a LONG time.


I couldn't even lift my head from the pillow let alone get myself out of bed and I quickly came to the realization that there was no way I was going to be getting on the bike today. I was filthy to say the least. Having to pull out of a tour is a hard and frustrating enough decision as it is, made even more so when it is due to unnecessary things outside of your control.


Welcome to the perks of lower level women's cycling. The higher ranked teams were put up in hotels whilst us club teams were in these dorms. Riding tours are hard enough as it is and after each stage it is particularly important to put extra emphasis on recovery strategies. Most higher level teams have staff to look after meals, washing and even booking different accommodation when the set accommodation it isn't up to scratch. Unfortunately this isn't the case for most other women club teams. Once we get home from the stage, it's into the open communal showers with hot water if your lucky (don't forget your thongs). Next its time to hand wash your kit in the sink and cross your fingers that it will dry in time for the next stage, otherwise you're riding in a wet chamois - yummy. Down for dinner and if it looks slightly poisonous or unappealing then tough luck, looks like you're going to starve unless there is a supermarket nearby where you can buy pre-made meals. After dinner you have to walk up 5 stories because the rickety lift has finally given way when legs burning, you eventually reach your bedroom and realize you've forgotten your room key on the table downstairs...Finally to bed where getting bedding provided to you is optional, I always bring a pillow and a towel so I don't have to use my backpack and paper towel or a face washer. Before you know it, it's ridiculous o'clock at night and you shouldve been in bed hours ago but now you're lying awake because a dog is barking or the staff members of another team are all having a grand old time drinking beers - it's 2am and you've got 4hrs until you get up and have to do it all over again. 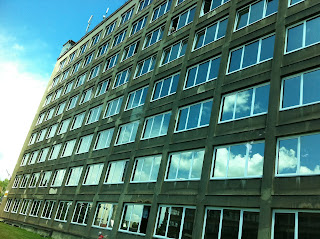 Welcome to pretty much women's cycling. And this was a UCI race!!! But what keeps me coming back year after year is the joy and excitement I get from racing and the people i meet along the way. I know if I continue to work hard my efforts will pay off and I will get the results which will enable me to eventually ride for a professional women's team and make all of this seem worthwhile. In the meantime, I'm trying not to stress too much and enjoy the ride - otherwise I'll never make it out alive :p


A big thank you to all the team at For Viored Brookvex for the support and a special mention to Jody Leach our swanky for sitting up with us and listening to a bunch of girls being sick. If you think being a male swanny for a team of girls would be the best job ever - ask this man. You definitely deserved a medal.


My eyes and ears will never be the same after this trip but i'll leave that all for another post. I'm now sitting in the van on te epic journey back to Belgium. I'm still feeling slightly average but I'm looking forward to getting back home, recovering and getting my body ready for my next race Dwars de Westhoek, a UCI 1.2 in Belgium. I broke my ribs at this race 20km in last year so here's hoping for some better luck!!! Lol...

Lost in translation in the race manual... I LOLed.