Tour de France: Kolobnev Tests Positive, Out of the Tour

Share All sharing options for: Tour de France: Kolobnev Tests Positive, Out of the Tour 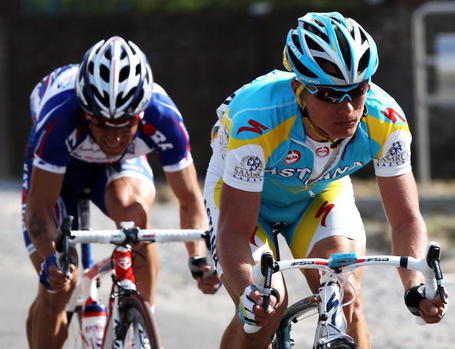 According to the French sports newspaper L'Equipe, Alexandr Kolobnev of Katusha has tested positive for a diuretic and has been expelled from the Tour de France. The positive test came during the first week of the race. Kolobnev, who held 69th place in the overall, returned a positive A sample for hydrochlorothiazide. The substance can be used as a masking agent for other doping products.

The French laboratory, Chatenay-Malabry, carried out the analysis, and L'Equipe broke the story first. Indeed, L'Equipe published the account by Damien Ressiot before Kolobnev and his Katusha team received the official notification. The UCI subsequently confirmed Kolobnev's positive test.

According to the UCI press release, Kolobnev did not receive a provisional suspension. The diuretic in his A sample is a "specified substance," which follows different rules from doping products such as steroids, EPO, or banned methods such as blood doping. All the same, the UCI encouraged the Katusha team to remove Kolobnev from the race. He left the race late Monday evening.

According to the prohibited list, hydrochlorothiazide is banned for use in and out of competition. However, it is also considered a "specified substance," because it can be accidently ingested more easily than other banned substances. The WADA Code allows that a "specified substance" may lead to a lighter sanction for the athlete.

Kolobnev has ridden a relatively quiet season this year with Katusha, but last year, he won the Russian National Championship and finished second at Liège-Bastogne-Liège behind Alexandre Vinokourov. Kolobnev finished second at the World Championships in 2007 and 2009, and fourth in the road race at the Beijing Olympic Games. In 2007, the Russian won the Strade Bianche semiclassic in Italy and he has finished on the podium at the Giro di Lombardia.