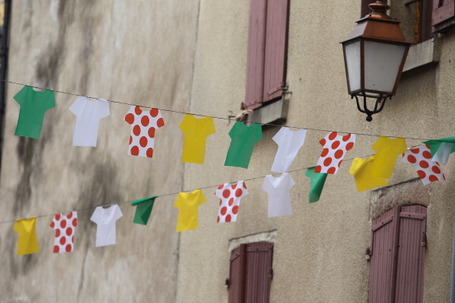 Enough with this rest day thing, we have more bike racing to do! Hopefully, with much less crashing. People, please, keep the cars and the bike racers separated, okay? Okay, onward with the bike race!

Tuesday, the Tour de France resumes with a stage running 158 kilometers from Aurillac to Carmaux. The stage profile includes four categorized climbs, but on paper, it looks easier than the weekend's stages through the Massif Centrale. None of the climbs are over 4 kilometers in length and the gradients look relatively relaxed. Sometimes, paper lies.

The Tour is deep into the south of France now, and it should be a hot day of racing on Tuesday. Says the Tour website: "Mais la chaleur peut user les organismes." I think that means the heat will maybe make the bike racers tired, but it also sounds like it could be some kind of alien invasion. Body snatchers are using my organism! Help! Really, I can't be sure.

The final climb of Tuesday's stage comes with 15 kilometers to race, and it's a downhill run-in to the line. It's a good day for the sprinters' teams to take an interest in the proceedings, and we could very well see a sprint in Carmaux. Certainly, HTC-Highroad will have an interest in chasing another stage win for Cavendish.

If Thomas Voeckler did not currently wear the Yellow Jersey of race leader, I'd expect him to join the breakaway. But with the Yellow Jersey on his back, Voeckler is for now out of the business of going with the early escape. Still, there are plenty of teams and riders who have not yet put their faces to the wind. Despite Voeckler's success in taking over the race lead, the French teams are still short on podium kisses.

Though the rest day will likely have refreshed the legs, we have passed into the more unpredictable phase of the Tour de France. Some riders will have come through the frenzied first week better than others, obviously. A profile like this one during the first week would almost certainly have yieled a sprint, especially with the descent to the finish. During the second week? Things look a lot less certain.

Race leader Thomas Voeckler has said that he will try to defend the Yellow Jersey for as long as possible. We can expect to see his Europcar team working on the front to keep the break from running out the clock. The other major teams interested in the general classification may not help much, though. If Europcar can keep the gap relatively close, the sprinters' teams will take an interest. Otherwise? Maybe not. Yes, waiter, I'll take the sprint. But I'd like the side order of unpredictable with that, thanks.