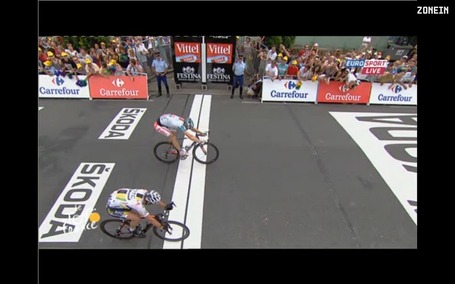 Andre Griepel (OPL) won a disorganized sprint ahead of former teammate and number one adversary Mark Cavendish in today's stage to Carmaux. JJ Rojas and World Champion Thor Hushovd (Garmin-Cervelo) followed in for third and fourth respectively. This is Griepel's first outright victory over Cavendish since they split ways after several years together at HTC.

Thomas Voeckler defended his yellow jersey, even giving it a go in a late-race attack with Green Jersey Phillipe Gilbert in the final 15km. While Gilbert defended his points jersey, JJ Rojas closed the gap with his podium finish on the stage.

Today's stage was a lumpy but sprinty (yes, full of paradoxes today) run of 161km from Aurillac to Carmaux. A category-4 climb summit with 14km to go would prove a test for the sprinters' mettle and possibly provide a springboard for a late attack a-la-Vino.

Play-by-play and full results below the jump!

20km to go: Just getting my feed running and the first thing I see is Tony Martin is on the front for HTC. I love me some zombie face, don't you?

18km to go: We're on the last climb of the day. Marcato(Vac), Vichot (FDJ), and Minard (AG2R) are the only survivors of the day's break du jour and they have 10 seconds. But they aren't giving up yet. Omega-Pharma is on the front driving it. Since it's going uphill, I'm assuming they're working for Gilbert and not the Gorilla. In related news, Griepel wonders exactly what's so great about the Tour de France.

17km to go: Marcato jumps! Guess who gets the red number tomorrow! I love it when the break fights for most aggressive rider once they're doomed, don't you? So much fighting spirit these chaps have!

16km to go: Gadret popped, Roche smiles. Also, sprinters are dropping like flies from the front group. Maybe 30 guys left now, but I can't tell because my Eurosport feed is freezing almost as much as Versus.

15km to go: Gilbert attack!!!!!!! Gilbert, Voeckler, Devynyns, and a Gallopin (Cofidis) guy are free on the upper part of the climb! Voeckler drives it now!

14km: Zombie-face Martin (HTC) bridges after looking back to see Cav nowhere in sight. Only a few seconds between the groups.

12km: The gap looks solid, but Devyns attacks and Gilbert is the only one who will work. Guys, you could ride away with this... if you just worked. BMC is on the front because that's what they're good at these days.

11km: Order restored in the break, all 5 together and everybody is putting in solid turns.

8km: Tony Martin doesn't want to work now. So much confusion in the HTC car today. Jens! is about to grind through his molars with that grimace as he takes a massive turn on the front. Nobody wants to give Martin or Voeckler more time.

5km: Shuffle, reshuffle. In the end, Gilbert is solo with 12 seconds and HAMMERING down a slight descent. But, he's caught with 4.5km to go. Too bad... Evidently Cav is in the small bunch too as Danny Pate drives it for HTC.

2.5km to go: Millar time! HTC has two guys left and there is some hesitation and confusion in the bunch, but Tony martin pulls him back.

1km to go and it's disorganized. Daniel Oss ends up leading out the sprint and Cav is forced to jump from way out. It's a drag race between him and Griepel and the Gorilla edges him out by a half-wheel! Cue fantastic quotes from these two. Really, I can't wait for the headlines! 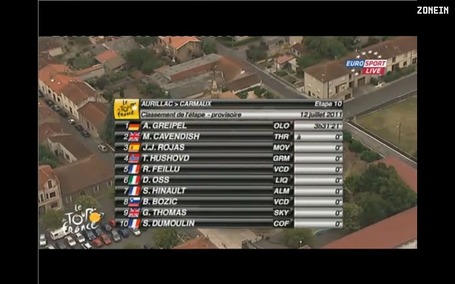 Here are the current race standings.