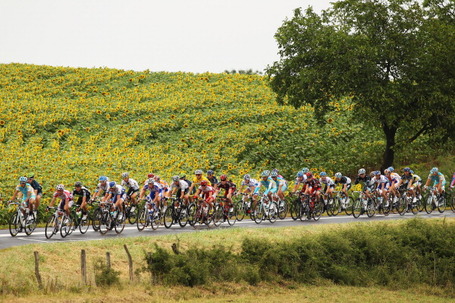 So, Greipel takes it to Cavendish at last, eh? Nothing like a little rivalry to add zesty goodness to the proceedings. Wednesday's stage offers Cavendish a chance to exact his revenge. Yes, it seems we have one more sprint stage to go before the mountains. Last chance for the sprinters!

The Tour de France counts down to the mountains with a sprint stage running 165.7 kilometers from Blayes-les-Mines to Lavaur. Wednesday's stage includes only two categorized climbs, and they won't cause anyone much difficulty. The course map looks like an upside down Z, and it sends the Tour ever closer to the Pyrénées mountains. The first mountain stage of this year's Tour de France comes on Thursday with a finish on Luz Ardiden.

As for this stage 11, it's all about the sprinters. Though no doubt someone will go out early on the attack (I'm looking at you Français des Jeux!), the break is almost certainly doomed. After Wednesday, only two more chances for the sprinters remain in this year's Tour de France. Tomorrow, it's time to race bikes. (I'm looking at you HTC-Highroad!)

I'm going to go ahead and call this one Cavendish's Revenge. Hey! At least, there's no more talk of aliens using our organisms! Which is so totally a relief.

Here is the stage 11 profile and the current race standings.