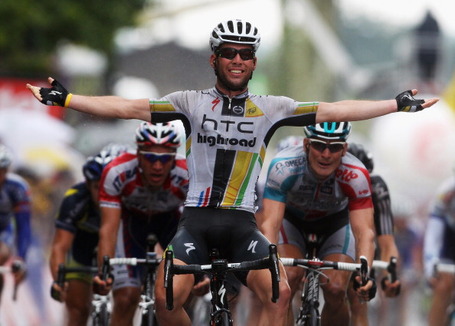 Mark Cavendish won the eleventh stage of the 2011 Tour de France ahead of Andre Greipel, reversing the finishing order of yesterday's stage. Tyler Farrar was third, but neither he nor Greipel were able to challenge the Manx Missile today. Cavendish's victory puts him in the Green Points Jersey while Thomas Voeckler rolled in with the peleton to defend his overall lead on the eve of the mountain stages.

Today's stage was a mostly flat run of 167.5km from Blaye-les-Mines to Lavaur. Uncharacteristically for the southern stages of the tour, today was yet another rainy day. At times the rain was so hard the lead car's headlights made it appear it was evening rather than the middle of the afternoon. For those of you wanting to work on your cycling tan, I suggest you avoid France this year. Also, bring a rain cape or three.

Full results and quick rundown of the finale below the jump. Spoiler alert - it's a sprinty sprint! 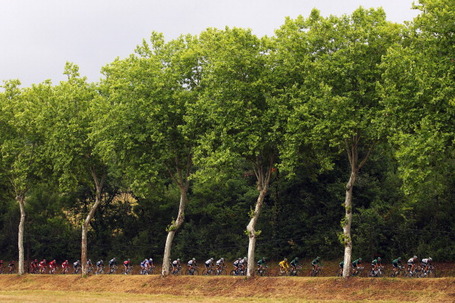 7.3km to go and the break has 30 seconds. Lars Boom is pulling a great bitchface. You know what I'm talking about.

7.0km: Matt Goss is off the back. This is peut bon for HTC. Maybe stomach problems still?

6.0km: HTC has Eisel on the front. A bit early for him, but the break is strong today. Peter Velits takes over and Lampre lends some power. Sky too. Lots of people want a sprinty sprint today.

5.0km: Boom stays in the saddle but still manages to "fire the big gun". FYI, Boom is pronounced Boeh-m. Or something like that - sadly not onomatopoeia.

3km: Boom has 8 seconds. Unless it gets crazy twisty I think he's toast. But if anyone can put up a fight and make them earn it, it's Boom.

2200m to go. Boom is caught, Eisel pulls off and Tony Martin takes over. HTC only have Renshaw in front of Cav now. This is bad news bears for them.

500m: Geraint Thomas is leading out Renshaw now. Really, it's so nice of these British riders to stick together. We really know he's working for Boasson Hagen, but you know people will say Sky is wooing Cav.

Cav jumps from a ways out but nobody can match his speed. Greipel looks like he's doing all he can to stay close to his wheel and Farrar tries but can't get around Greipel for second. 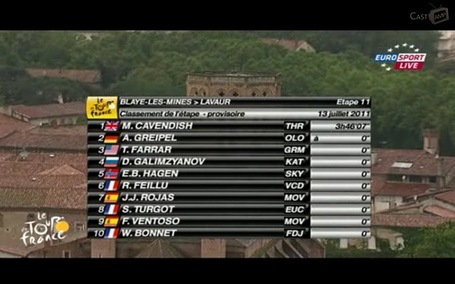