Share All sharing options for: Tour de France: Inside the Prix Combativite! 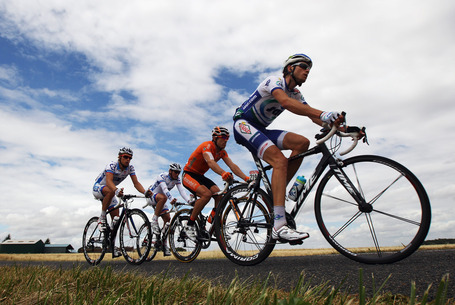 Today's award of the prix combativite, the combativity prize, generated a few sniggers from Eurosport as Frenchman Mickel Delage won for the second time in the Tour. Delage was part of the day's breakaway which hung on from KM 15 to the final moments of the race. But five other guys were there too, including Lars Boom, who alone extended his effort with 2km of insane hammering in a final, vain attempt to win alone. So why Delage? Is the combativity prize really just the "friskiest Frenchman" award?

Results are a bit murky... on the flip!

Some background... the prize winner is chosen by an eight-person (OK, man) jury of hack... uh, specialists in the area of cycling knowledge, and each non-TT day they award the attackingest rider a 2k EUR prize and the red number for the next day. Final overall combativist gets 20kEUR, not a bad Tour's work. So it's totally subjective, and when you have multiple attackers, as is typical, then the shenanigans begin. Here's a list of winners so far this year and what they did:

So there you have it. Joining the breakaway is a prerequisite, but from there it's a mix of criteria, including: