Tour de France: Into The Mountains

Share All sharing options for: Tour de France: Into The Mountains 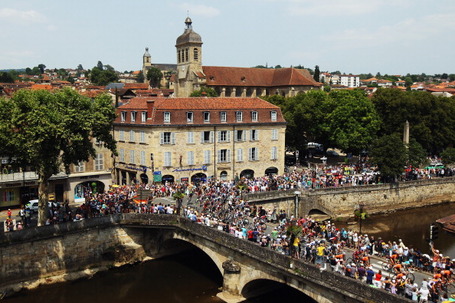 Tomorrow marks the first visit to the high mountains for the 2011 Tour de France. Which, if you are a fan of the bike racing, is just a little exciting. The stage includes the Tourmalet-Luz Ardiden double last seen in 2003. You know, the Year of the Musette Bag. Did we ever decide who waited for whom? I can't recall. Then we had The Musette Bag, now we have The Chain Drop. Plus ça change and whatnot.

It's been a surprisingly intriguing first week of racing. I vote yes to the Vendée, Bretagne, and Normandie for more Tour hosting. The roads are interesting and there's weather. Also, the farm art has been formidable! Really, they've taken it to whole new levels there this week.

As is usual for the Tour de France, a few contenders have said an early good-bye to the race: Chris Horner, Janez Brajkovic, Bradley Wiggins, they're all out. You need a little luck in bike racing, and nowhere is this truth more obvious than during the first week of the Tour de France, where every team wants to ride at the front and only so many riders will fit on the road. Gravity, kids, it bites.

Caught behind one of those crashes, Alberto Contador sits around 1:30 behind Cadel Evans and Andy and Fränk Schleck. This set-up seems like a recipe for entertaining racing through the mountains. According to Daniel Benson, the editor at Cyclingnews, four riders from Saxo Bank sat up early during Wednesday's flat stage to Lavaur. In 1996, Bjarne Riis followed much the same tactic on the day before the first mountain stage. What did he do the next day? Why attack of course. I have a feeling that Alberto Contador no longer has a sore knee.

Cadel Evans also expects hard racing on tomorrow's mountain stage. He told reporters after the stage that the Real Tour de France begins tomorrow. Somewhere, Gilberto Simoni is smiling. The BMC Racing Team has ridden themselves into the pavement for Evans during this first week. BMC brought a team heavy with classics talent with the goal of getting Evans to the mountains without getting caught up in any of the first week's crashes. This part of the plan has gone swimmingly. It remains to be seen if Steve Morabito and Ivan Santamorita can support Evans through the mountains as well as the classics squad have kept him at the front during the first week. Even if they don't, Evans has shown a knack for the freelancing.

Will anyone be surprised if there is a Leopard Trek rider in the early break? Not I! With two major climbs stacked up at the end, it's not a bad stage to put a helper up the road. Maybe an attack on the Tourmalet? Or, maybe just a helping hand late in the game. Smart tactics, right there.

Over at Liquigas-Cannondale, Amadio called Evans a dark horse in the general classification battle. L'ouch! Amadio, that's just cold, dude. The Liquigas-Cannondale team leader Ivan Basso currently lurks around a minute behind Evans in eleventh. That's not a bad position at all for the Italian who always enjoys mountains more than just about anything else.

It's the Italian Quarter right there with Damiano Cunego sitting within one second behind Basso on the general. Guys, it's not the Giro. You aren't racing each other, you know. In truth, I can't believe Cunego is still in the same time zone as the favorites. Holy cannoli! This is some kind of miracle. But I'm going to pretend not to notice. Ixnay on the Inxjnay. Or something.

On the subject of dark horses, Robert Gesink wears the White Jersey and sits 1:25 down on Evans. Gesink crashed and was on the verge of abandoning the race. But he's still here! And, look at all those scrumptious mountains. If there's one thing that Gesink can do on a bike, it's climb. Certainly, he has more dark horse cred than Evans, who has after all finished second overall at the Tour de France. Gesink? We've not seen him on the podium before. There's a first for everything, no?

Things are looking more difficult, but not impossible for the Americans Tom Danielson and Christian Vande Velde. Both lost time in the first week, but their Garmin-Cervél team can still count the Tour a success so far, after they won the team time trial stage and a sprint stage with Tyler Farrar. Before this Tour, team manager Jonathan Vaughters had never had a stage win on his team. Now, he has two.

Tom Danielson has around 2:00 to chase back on Cadel Evans, while Vande Velde is around 2:20 behind. Those gaps will not be easy to close, but the mountains have a way of overturning the order of things. Perhaps the wheel will turn in Garmin-Cervélo's favor. Stranger things have happened.

Tomorrow is le quattorze juillet, the French national holiday, which commemorates the storming of the Bastille during the French Revolution. The day of glory has arrived! Yes, there will certainly be French riders in the early breakaway tomorrow and they will desperately hope that the general classification teams do not chase too hard.

David Moncoutié is the obvious pick to go out early on the attack. Climber Rémy Di Gregorio of Astana is another good choice, and he has conveniently dropped to 22:00 down in the general classification. If one of those guys is not in tomorrow's early break, I will eat my floppy beach hat.

Let impure blood water our furrows! No, people, it's not a fortune cookie. It's the French National Anthem. Drive on sacred patriotism! Let victory hurry to your manly tone! Is there such thing as national anthem doping?

For now we have mountains. Tomorrow, the real Tour de France begins. Who will wear Yellow at the end of the day on the summit of Luz Ardiden? I have a feeling it won't be Europcar's Thomas Voeckler, but we'll see soon enough.

Clip and Save! Here is the Tour de France current general classification. Also: According to the official time schedy, the riders should hit the base of the Col du Tourmalet right around 6:30am Cali time. I leave it to you, lovely readers, to do the math for your particular time zone. Bonne chance!