Share All sharing options for: Tour de France Stage 12: Sammy Sanchez flies to victory while the GC battle heats up! 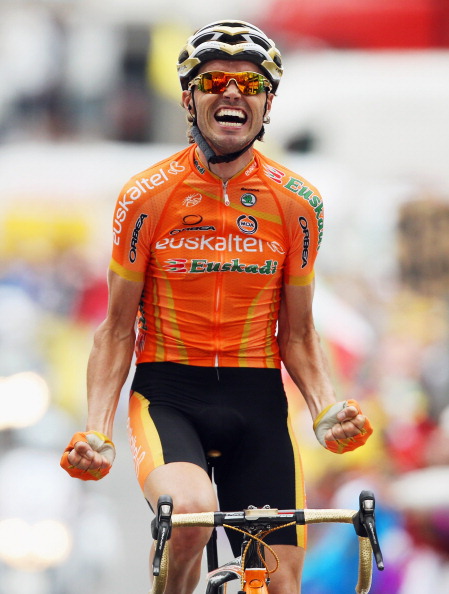 Samuel Sánchez of Euskatel-Euskadi won stage 12 of the 2011 Tour de France with a daring attack on the descent of the Col du Tourmalet and a scrappy climb up to the summit finish at Luz Ardiden. It was his first ever stage victory at the Tour de France. Jelle Vanendert of Omega Pharma Lotto, Phillipe Gilbert's stellar teammate in the Ardennes classics, followed Sanchez and finished second ahead of a storming Frank Schleck. With his stage victory today, Sánchez also took over the lead in the Mountains Classification from Johnny Hoogerland.

Today marked the first summit finish and true mountains day of the Tour de France, and climbed 211km over the Pyrenean climbs of the Cat 1 Hourquette d'Ancizan, HC Col du Tourmalet, and HC Luz Ardiden. Unlike 2003, there were no stray musettes to yank riders onto the pavement, though Alberto Contador may have wished for such an excuse for his sub-par performance. In what will surely be the biggest news of the day, the defending Tour champion ceded 33 seconds to Frank Schleck and 13 seconds to other his rivals Ivan Basso, Cadel Evans, and Andy Schleck. Damiano Cunego also finished in the front group, while Tom Danielson did an impressive ride to finish eleventh on the day.

A courageous ride by Thomas Voeckler, showing his increasing maturity in the prime of his career, saw him easily retain the yellow jersey of overall leader. French television has dubbed the smiley French rider, Monseiur Panache, for his spirited defense of the Yellow Jersey. Voeckler rode with the race favorites until the final kilometers of Luz Ardiden.

Mark Cavendish extended his lead in the points classification.  Arnold Jeannesson of Français des Jeux took over the White Jersey classification from Robert Gesink of Rabobank.

It's a mountain stage, so there's a lot of commenting to be done under the jump. Follow below for full results and my speculations during the stage, then laugh at how wrong they may have been in the comments!

80ish km to go and it's time to tune into the action because there is an intermediate sprint coming up. The break numbers six - Moreno (EUS), Mangel (SAU), Roy (FDJ), Thomas (SKY), Kadri (AGR), and Gutierrez (MOV). Mangel takes the "sprint" from the break, but the real action is heating up 9 minutes behind them as HTC, Omega-Pharma, and Movistar boogie at the front to set up their green jersey contendors. Really, I am a fan of this new points system. It means we have sprints on mountain stages! Well, not full-gas, but amusing enough for sure. Anyway, Cav takes maximum points followed by another teammate (Renshaw) and then Rojas from Movistar. Eisel almost steals those from Rojas too, even after leading out from 500m. 3 HTC dudes quicker than Rojas almost? L'ouch. PhilGil gets no green jersey love today as Ventoso steals some points for teammate Rojas.

In other news, Moncoutie and DiGregario disappoint an entire nation by not making the mountainy break on Bastille day.

74km to go and we're on the first proper climb of the tour, the Cat 1 Horquette d'Ancizan. Europcar setting the pace, sprinters pedaling squares off the back, and it's time for the Hoogie Boogie (thanks to Eurosport for this!). The spotted dutchman dances off the front with Chavanel for company and Kreuzinger joins soon thereafter. French champ going for it on Bastille Day - this is how it's supposed to work!

15km to go: You know, having a class in the middle of a stage is usually fine. Until there are mountains! From what I hear, things got explosive on the Tourmalet. Here's the twitter summary, or what I can make of it:

Gilbert attacks on the descent! Like, wow. Dude is seriously impressive. Why hasn't he been riding the tour every year, this is awesome to watch! Trofimov (KAT) and Riblon (AGR) for company, they get up to Ten Dam and Kreuzinger. After a few minutes Sammy Sanchez, another carrot and another OPL rider show up. Gilbert is taking the badass way of going for green jersey points.

11km to go: The climb to Luz-Ardiden is only really starting. Jens! is on the front (AGAIN!) and his face is seriously scaring me. Also, Kreuzinger has exploded. At this rate, he might get caught by the grupetto.

9km to go: Symd, the best non-GC climber around (by popular consensus), is crushing it on the front for Basso. Kloeden's at the back of the group. And then there were none (GC contenders) for Radioshack? Dude doesn't look so hot. Also, the gap to Thomas and Roy is down to 1:15. Not looking good for these two. Meanwhile, Sammy Sanchez and Gilbert's teammate Vandenwert have made it up to the two leaders. Daring move by SamSan to make up time, attacking on the descent of the Tourmalet.

8km to go: Roche losing ground. Somewhere in France, Gadret chuckles. CA Sorenson is getting his sufferface on behind the group, as is Navarro. Looks like sitting up in yesterday's stage didn't help Contador's mountain goats a ton. The Giro, it bites at the legs in July.

Also, Contador has been riding on the nose of his saddle. Don't remember if that's normal, but he's literally on the rivet. And his cadence is a touch slower than both of the schlecks - not normal. Maybe it's just me, but he doesn't look so hot.

4km to go: Andy accelerates, Contador latches on, then Frank counters immediately! Good racing here. Basso tries to close the gap to Frank, it doesn't work, and Contador has to close the gap. Frank goes again! Would you believe it if I said Voeckler was still there and looking good?

2.5km: Frank looks fantastic as he goes again! Neither Cadel nor Contador mark him and he has 10 seconds in a heartbeat. Contador standing up a lot, looks not at all like his usual self. BTW, SamSan has 1:15ish on the group.

2.0km: Basso accelerates, Cadel follows and then ups the pace. Voeckler follows then blows a bit. Contador realizes he has no way of shaking his Andy-shaped shadow. Also, Cunego is still there. Go tiny prince go!

700m: Frankie has caught Sanchez and Vandenwert. Or, almost. Vandenwert accelerates but he can't drop the Olympic champion. Sanchez wins the stage, F Schleck comes over a few seconds down, and coming into the finishing stretch 30 seconds later is Basso... Evans... A Schleck... but Contador is dropped in the final bit and loses another 13 seconds to his biggest rivals. L'ouch. How long before his knee starts "acting up" again? 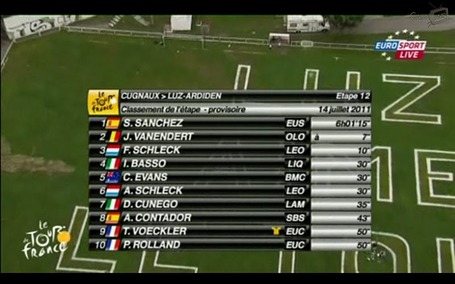 Here are the full results for today's stage.