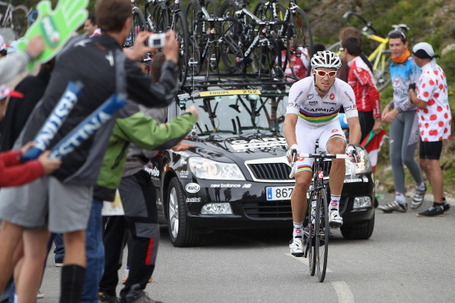 Thor Hushovd of Garmin-Cervélo won stage 13 of the Tour de France with a solo escape in Lourdes today. The stage made it the sixth consecutive year that Hushovd has won a stage at the Tour. David Moncoutié of Cofidis finished second and Jérémy Roy of Français des Jeux, without a doubt the most combative rider of this year's Tour so far, rolled across the line in 3rd, visibly heartbroken after coming so close to victory. Roy did receive the Mountains Jersey as a nice consolation prize.

Hushovd joined an early breakaway that splintered on the only major climb of the day, the Hors Catégorie Col d'Aubisque. Though the Garmin-Cervélo rider came over the top of the climb two minutes down on Jérémy Roy, he rode a daredevil descent to catch first David Moncoutié and then Roy, dispatching both of them in the final 3kms of the stage. Hushovd crossed the line solo and celebrated his ninth career Tour victory.

Thomas Voeckler of Europcar maintained his hold on the Yellow jersey as the overall standings remained unchanged. Mark Cavendish of HTC-Highroad still wears the Green Jersey. However, the Manxman lost a bit of his lead as rivals Phillipe Gilbert and JJ Rojas finished 10th and 12th on the stage, respectively.

After yesterday's lumpy romp through the mountains, today only had one climb, the Hors Catégorie Col de l'Aubisque. After the summit, there was a downhill run of 42.5km to the finish in Lourdes. Surely some riders are hoping for some healing waters tonight!

Details and full results below the jump!

After eons of attacking, an 9-man breakaway got free. The culprits looking for a fun day in the mountains were as follows: Gusev (KAT), Boasson-Hagen (SKY), Pineau (QUI), Roy (FDJ), Hushovd (GAR), Bak (HTC), Petacchi (LAM), Tjallingii (RAB), and Moncoutie (COF). Lots of classics firepower for going on a mountains romp, no? For those of you keeping count, that's the 5th breakaway Roy has been in this tour. If he doesn't get most combattive rider in Paris, I'll eat my saddle.

Going up the Aubisque, things got a little spicy in the break. Thor SMASH attacked on the lower slopes, getting a gap close to 20 seconds at one point. Jeremey Roy and then Moncoutie follow, nobody else can get across. Roy went past Hushovd and

Over the top of the Aubisque Roy lead Mouncoutie by less than a minute and Thor SMASH by two minutes. Hushovd had no problems catching Moncoutie on the descent and was slaloming through the corners like few can.

20km to go: Gilbert attacks going into another downhill section. Anything Thor can do, I can do better! Since he was trying real hard to make the break earlier in the stage, he's clearly hunting for green jersey points as much as he can.

16km to go: Gap is down to 45 seconds. Roy looks under pressure, Thor SMASH is killing the downhill sections. Lets not forget he was a huge addition to the Garvelo TTT squad. Dude has a lot of power, especially compared to a skinny kid and when going downhill.

Also, Gilbert hooks up with Mollema. Dude is really fighting hard for those green jersey points! Must be kicking himself for not making the break today, though he certainly tried enough in the beginning.

11km to go: Movistar stars picking up the pace, worried about Gilbert getting those points. Dunno if Rojas is in this group, but he might be. He was less likely to get dropped than Cav et al on the climb and could probably bridge back on the descent.

10km to go: 18 seconds between Roy and Thor SMASH! Moncoutie not really contributing, but I wouldn't either with Thor looking to win the sprint. Now that it is looking like Roy will be caught, Moncoutie starts pulling through a bit more.

3km to go: Hushovd and Moncoutie have been playing games, but Hushovd gets Moncoutie out in front then attacks to go up to Roy solo. As expected, Thor SMASHes the gap and then SMASHes Roy! Hushovd is solo from 2km and smiling like it hurts so good!

Roy is dead in the water and Moncoutie can tell, riding straight past him with no difficulty. But poor Davide has no chance of getting back up to the World Champion

Also, this is Hushovd's 6th straight year of having a victory in the Tour de France. How's that for metronomic consistency, kids? 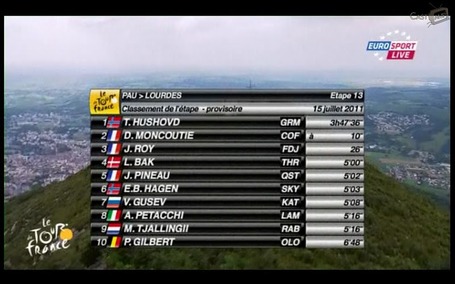 Here are the full results.