Yes, I know it was only a week ago that the Giro Donne ended, but the racing continues - and in the spirit of the Giro, this is another superb race - fantastic organisation, one of the best race websites out there and great media coverage so we can follow it too. Well, both races *are* run by women, so that must be the reason why!

Thüringen Rundfahrt is 7 stages around Thüringen in central Germany - a team time trial, an ITT, 2 (or 3) sprint stages and the rest hilly routes that look perfect for escape groups - each stage starting and finishing in the same town. In his previews of 2010 and 2009, Monty has some great information about the area - I can't compete with Liza Minnelli clips, so I'll recommend you to visit them instead. But some things you should know about this race - it has cobbled climbs (a LOT of narrow, cobbled streets), short, sharp hills, and the race has a fantastic liveticker - and last year there were about 3 different ways to see tv coverage of the race on youtube and online. Check out the comments here for information about where you can see it, but in 2010 there was coverage on the evening news on local TV station MDR Thüringen that were streamed online (try at 19:00 CEST on race days here) and daily updates from the RegionGriez youtube - and other video sources appeared throughout the race.

I have a confession to make about this race - I'm very excited, because Horizon Fitness are letting me tag along with them - so I'm a little bit enthusiastic...

If you click on each Stage link, it'll take to you a page with the route mapped out on googlemap, so you can have a satellite view as well, to get an idea of what they'll be riding through. I love it when races do that! The race is organised so that there are intermediate bonifications, which always adds excitement. 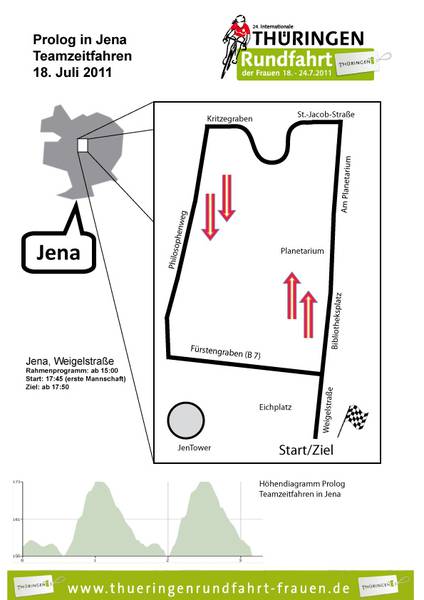 The Prologue is a team time trial, a 3.4km loop around the city of Jena, a university town with links to the multi-talented Johann Wolfgang von Goethe and the writer Friedrich Schiller. It's a tree-lined route, passing the world's oldest planetarium, and while the lumps on the profile look scary, remember it's a very short route - the lowest point is 153km, the highest 172m, and the right-angled corners will be more significant to the race than the climb.

This will be a good place to see if anyone can challenge HTC-Highroad, and get an idea of how the teams are looking before the World Cup TTT Open de Suède Vårgårda at the end of the month...

Stage 1 is around 119.2km around Gera, the birthplace of Otto Dix. It starts with a 4km neutral zone (and remember how Lotto's Vicki Whitelaw describes neutral zones? With a wry chuckle!) then takes a big loop visiting various small towns, before back to the wide roads of Gera, with a sharp climb at the end. Again, it's not especially high (about 300m) but it's probably steep, and very likely cobbled... Last year Edita Pucinskaite won the Gera stage, with Olga Zabelinskaya second and Charlotte Becker third - it was all about the breakaways, and looks good for more of the same this time around. 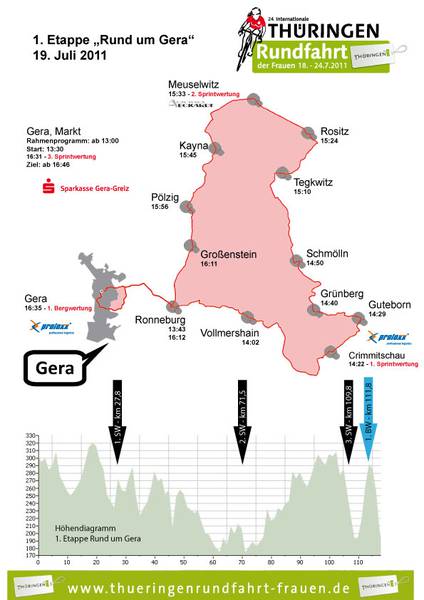 Stage 2 has castles! And we love castles, right?

It's 105km, with lots of rolling hills, again, plenty of chances for breakaway fun. It passes reservoirs and finishes with (I think) two laps of Greiz (home of Ulf Merbold, the first German astronaut) Last year the Greiz stage ended in a sprint, but it does seem like it could go any way. 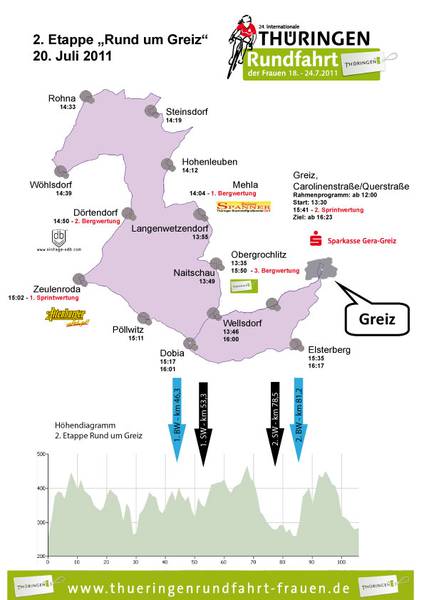 Stage 3 is 98.7km, probably the least hilly stage, with one 200m climb, but it'll probably be up-and-down for the whole day. It's starts and end in Schleiz and runs up and back through a very forested area - and the organisers are predicting it will end in a bunch sprint. 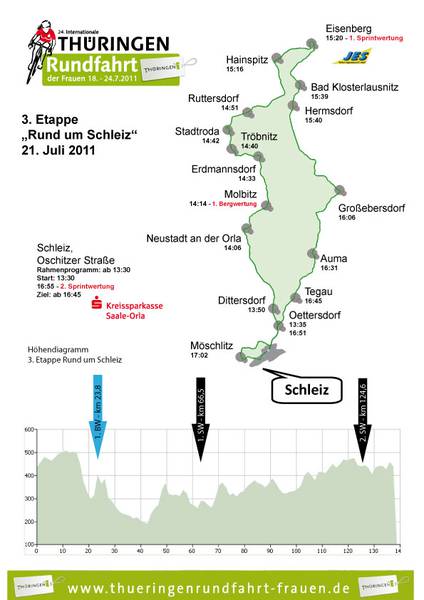 Stage 4 is another short stage, 100km - around Zeulenroda-Triebes, which is a town that really loves cycling. In fact, all the towns hosting the race seem very proud of the race - it's great - check out the town websites to see. Stage 2 passed through Zeulenroda, so it's very familiar territory, but this time a figure-of-eight course. The race organisers are describing this as the "Queen Stage" as it has two passes of Dörtendorfer Berg, which, they say, is only 1.5km long, but has a gradient of 14%. Last year, Iris Slappendel won in a breakaway on the Zeulenroda stage - so look out for those riders with a punchy climb and love the hilly escapes. 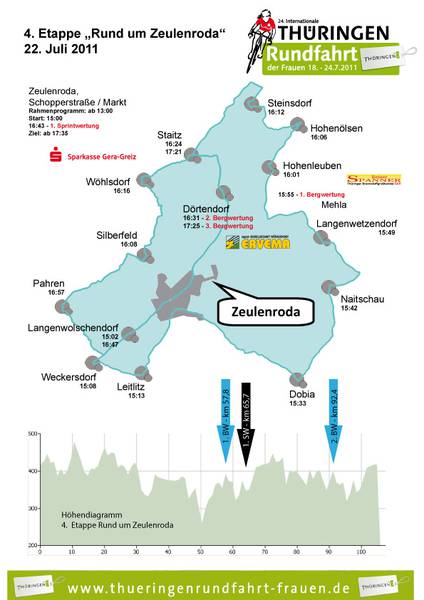 Stage 5 is an ITT, just 19km around Schmölln, rising from 220m to 300m, but much more up-and-down than that sounds. It starts and finishes in the picturesque, cobbled market square, with a festival, but runs out of the town and through the local countryside, that looks like farmland. It'll probably be the last chance for GC contenders to grab some extra seconds, as the last day looks like it's for the sprinters... 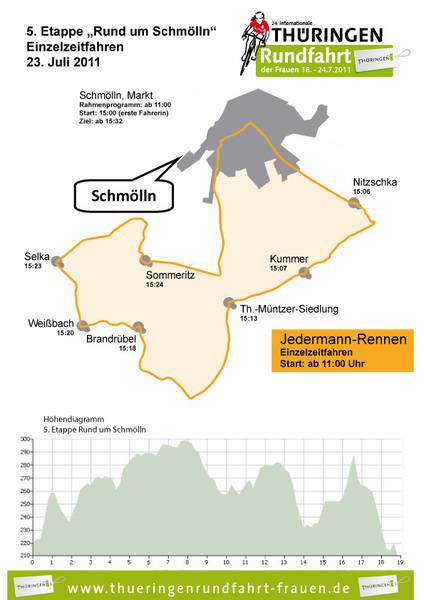 Stage 6, the final stage, is 100km around Altenberg, where last year's race started. It's four laps of a loop The race organisers are predicting a bunch sprint - although on each lap there's a vicious little climb - as Monty said last year, 400m long, with a 23& section, and it's cobbled.... If the race is using the same roads, that could tear apart the field - so, riders who like horrible short climbs and sprinting in towns.... 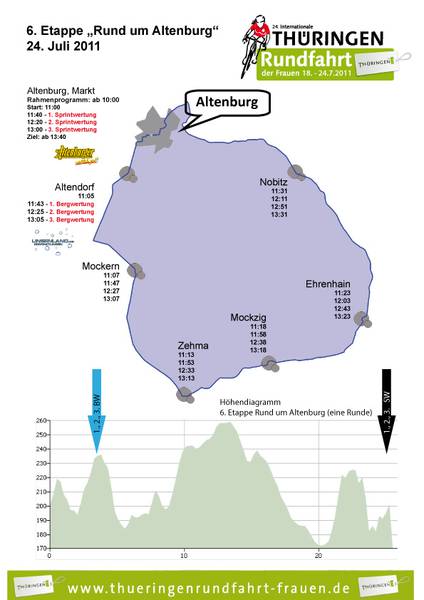 So, who's there to ride this race? The startlist is being updated frequently, and is changing as riders feel the effects of the Giro Donne in their legs. Find the most recent list on the right hand side of the teams page, so you get the updates (apologies if it's been updated since I wrote this)

Although Zabelinskaya won the race, the first stage last year was won by Emma Johansson, who had to pull out of the race with illness. She'll be back with her Hitec team, and is one to watch, for sure.

Riders who you think would deserve a holiday after the Giro Donne are Judith Arndt, who's leading a sprint-based iteration of HTC-Highroad - with riders like Amber Neben and Chloe Hosking, fresh after skipping the Giro. Tatiana Guderzo was narrowly beaten to a Giro podium place by Arndt, and will be there to get her revenge with MCipollini-Giambenini - although I imagine all eyes will be on her team-mate Nicole Cooke, who showed a stunning and emotional return to form when she won the Giro's Stage 5.

Garmin-Cervélo have Emma Pooley on the start-list, and look out for Noemi Cantele and Iris Slappendel (though I'd love to see Sharon Laws steal a stage) - and AA Drink-Leontien.nl have the return of their super-sprinter Kirsten Wild, who was caught in a crash in the Dutch nationals, and had to miss the Giro. Wild looks the best of the pure sprinters on the start-list The Australian National Team have all kinds of excellent riders, I'd bet on them winning at least a stage - and they include Vicki Whitelaw, on holiday from Lotto-Honda, so yay, blogging!

Although Marianne Vos and her Nederland Bloeit team-mate Annemiek van Vleuten are also on the list, Vos won't be riding, and Van Vleuten says on her blog that she won't be racing, due to recurrent leg problems. But remember that last year, every member of the team won a race or a stage, so they'll still be a force to be reckoned with.

Finally, the team I'm (unsurprisingly) most looking forward to - Horizon Fitness, this time with Hanka Kupfernagel. Kupfernagel is an absolute legend, across the road, track and cyclo-cross - in fact a lot of the reason there are even women's pro CX races are because of Kupfernagel's work. She'll be joined by her CX rival, Helen Wyman, and by Sarah Storey, who's aiming to be one of the few athletes to compete in both the Olympics and the Paralympics, when they come to London next year. You can read more about Kupfernagel and Storey in my Top Trumps post of last year - in fact, all the former World Champs covered there except Bastianelli are down to ride this race - but watch out for Horizon, and especially for Hanka.

It should be a fantastic race! Anything you find about it, please do add to the comments - and I'll be tweeting from the race (phone coverage allowing) as @_pigeons_ so I'll do my best with updates... not that this race needs it, it generally sets a very high standard that only a few other races can reach....