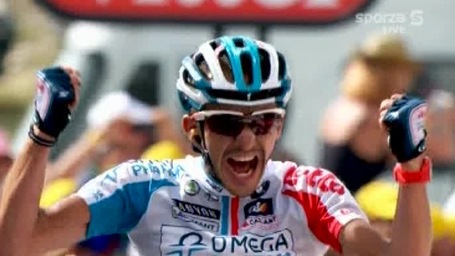 Jelle Vanendert of Omega Pharma-Lotto set Flemish hearts aflutter by giving the heads of state the slip on the hardest phase of the Pyrenees, the Plateau de Beille, for a tremendous stage win. The big favorites for yellow, and the present maillot jaune Thomas Voeckler of Europcar, held each other in check on the day's big climb, which saw a spree of minor attacks but very few big efforts. Samuel Sanchez of Euskaltel got away for second place, and put 25" into the other big names, and Leopard-Trek's Andy Schleck made a last-km attack for a few seconds, and maybe a point of pride. But no huge shakeups today.

The Plateau de Beille, the day's fifth rated climb and the most fearsome climb in three Pyrenean stages, kicked in for 15km at the end of the day's event. At 11km to go Andy Schleck took matters into his own hands, launching a trio of attacks which shed Tom Danielson and a few others, while exposing the weakness of Saxo Bank's Alberto Contador. BMC's Cadel Evans did much of the chasing, while Voeckler relied on teammate Pierre Rolland to shelter him as long as possible. By 7k to go Contador seemed to recover his form, and at 4km things narrowed more when Samuel Sanchez launched a brace of accelerations, though by then Vanendert was 30" up the road, hunting for the stage win. Sanchez was allowed to stay away, albeit just up the road, and the sight of the yellow jersey gave French fans much to shout about. Ivan Basso gave it his all to liven things up, but the Bigs -- Contador, Evans, Voeckler, Andy Schleck, Basso, (and JC Peraud) -- held each other in check to the top.

Vanendert's win extended Omega Pharma's run of good work, their third stage winner after Philippe Gilbert and Andre Greipel. Rigoberto Uran hung with the bigs today to move into the white jersey, after Arnold Jeanneson slipped back at the foot of the final climb. Vanendert moved into the polka dot jersey for his heroics today.