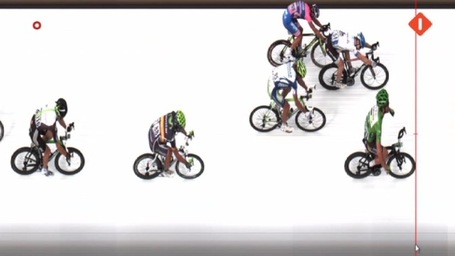 HTC's Mark Cavendish held off Garmin's Tyler Farrar by a wheel to win his 30th stage of the Tour de France and practically lock up the green jersey competition at this year's Tour de France. Cavendish and his primary leadout Mark Renshaw navigated a hectic final few km, enlivened by Philippe Gilbert's vain effort to steal some points in his green pursuit. The HTC train got interrupted and no single team gained position, but Cavendish has shown again and again that Renshaw is the only aide he needs. Renshaw got into the wind just inside the final kilometer, and held it for the leadout, as Daniel Oss of Liquigas sat on his wheel. Farrar was locked onto Julian Dean, and launched a massive sprint to the left as Cav went right around Renshaw, but while Farrar was faster, nearly closing the gap, he came from too far back to interrupt the Manxman's remarkable run of success.

Cavendish now has a firm grip on the green jersey, with 319 points, followed by JJ Rojas at 282 and Gilbert at 248. Neither has any real chance too catch the Manx Missile. In theory Tuesday's race to Gap will give both, superior climbers, a chance to drop Cavendish and go for the win. But mid-mountain stages aren't worth a full 45 points, they're worth 35. Rojas in theory could pick up 55 on Cav and take an 18 point lead into the Alps. But he lost far more than that on just today's final sprint, a fate that will likely repeat itself on the Champs Elysees in a week. And anyway, come Tuesday the inevitable breakaways will scoop up many of the intermediate points, and Rojas is far from a likely stage winner. Thus, he remains a threat to Cav in mathematical terms only.

No GC changes today. The peloton moves on to Saint-Paul-Trois Chateaux in the shadow of the Maritime Alps, which will border Tuesday's undulating stage to Gap. From there, the real Alps take over. But that won't be anyone's headache for another 48 hours.