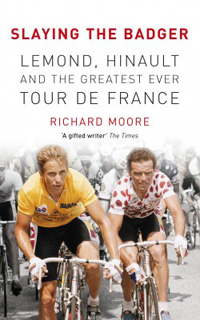 Yellow Jersey Press - the people behind William Fotheringham's Cyclopedia and Ned Boulting's How I Won The Yellow Jumper - have again teamed up with Podium Café, this time to give you a chance to win a copy of Richard Moore's Slaying The Badger.

Moore's book tells the story of what was one of the classic Tours de France: 1986, the year La Vie Claire team-mates Greg LeMond and Bernard Hinault tore the race apart in their quest to be on the top step of the podium come the Champs-Élysées. It really is a block-busting story of love, loss and betrayal. All it's missing is some bodice-ripping. Though it does have the wonderful story of 7-Eleven's soigneur Shelly Verses feeding Bernard Hinault cherries during the Giro d'Italia.

One of the most enduring images from that 1986 Tour is the one of LeMond and Hinault summitting l'Alpe d'Huez, arm in arm, the attempts by each to stick a dagger in the back of the other temporarily forgotten. With this year's race summitting the Alpe on Friday, that's the theme to this competition.

All we want you to tell us is this: who do you think will cross the finish line first at l'Alpe d'Huez on Friday?

There's no tricks to the question this time out: we don't want the ninth rider or the last rider. We want the first. It really couldn't get any easier.

As a tie-breaker, you'll need to guess the stage time. The Road Book gives a fast time of 2h52' and a slow time of 3h13' for the 109.5 kilometres from Modane to the summit of the Alpe via the Galibier. The actual time could be smack bang in the middle of the two or it could be way out.

1) stick your pick and stage time in the big white box at the bottom of the page. (Not registered to comment? Rectify that here.);

2) Tweet us your entry, using the hash-tag #PdCBadgerComp eg

If you want, you can double your chances of winning and hedge your bet by entering via the comments section below and via Twitter. Podium Café's special statto section will be collating all the entries across the site and Twitter before picking the winner. So please, make sure you use the #PdCBadgerComp hash-tag on your Twitter entry or it won't count.

If multiple entries have the same name, the prize will go to the one nearest the actual time. If no one gets it right, all entries go into Serendipity's hat. But if Podium Café cannot correctly predict the winner of this stage then I'm eating Serendipity's hat and switching my allegiance to handball. And I hate handball. Though hats can be quite tasty. When served with the right relish.

The usual rules apply, especially the one about the judges' decision being final. Especially if the first rider up the Alpe subsequently has the stage stripped from him. We are not going back and rewriting history after the fact. History is what actually happened, not what should have happened.

You can keep up to date with news from Yellow Jersey Press by following them on Twitter: @YellowJersey_Ed. You'll find Richard Moore on Twitter: @RBMoore73.

You'll find a review of Slaying the Badger - along with an interview with Richard Moore -  on the Café Bookshelf.

Next week on the Café Bookshelf: Richard Moore comes back for seconds as his Sky's The Limit gets put on the block. Plus you get a chance to win a copy of that book too.