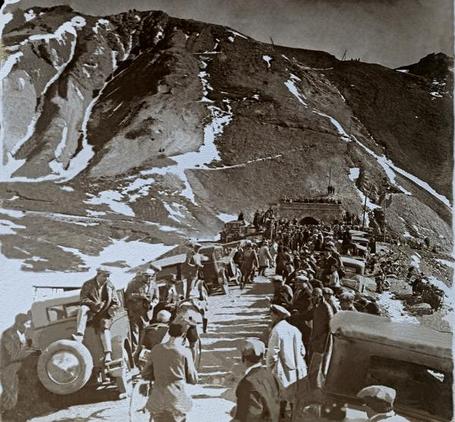 Photo used with permission.   All rights:  The Cycling History Collection (worth visiting this link).

A century ago, Col du Galibier made its first appearance in the Tour de France.  In 2011, to celebrate, the Tour will climb both sides of this mythical mountain, including a finish at the top in what will become the highest ever Tour de France stage finish (stage 18).

After the jump: A Brief History of Col du Galibier.

Please note:
I have linked to several historic photos below for copyright reasons.  But they're worth a glance.

The Col du Galibier is named after Le Grand Galibier, the mountain peak at 3228 metres that towers over the Col. It has appeared 57 times in the Tour de France, the most of any col in the Alps but fewer times than several cols in the Pyrénées.

Galaubié in 1183, Galiberi in 1516, Galeibier in 1660, Galibié by the 18th century: the origin of the word Galibier has evolved  from  "Galbert" a German in the region near the end of the first millenium - according to "dictionnaire étymologique" - by Adolphe Gros.   (I always assumed it was a guy named Gali that liked Bière).

The first ascension of Galibier in the Tour was the year following the 1910 high mountain experiment in the Pyrénées.  Think Tourmalet, Aubisque, "assassins," etc.   But Galibier was an order of magnitude bigger - almost 2000 feet higher than Col du Tourmalet.

This was an age before mass mountain tourism.   To most French, the high alps were a mysterious (and frightening) place where a few people with strange accents lived. And Galibier was remote.  There has never been a permanent settlement closer than 12 kilometres from the summit.  Galibier would remain the highest pass in the Tour until Col de l'Iseran in 1938.

A list of famous mountain passes then "I will not fail in my work in proclaiming that beside Galibier you are but pale and vulgar beers.  There is nothing more to do but tip your hat and salute from well below!" 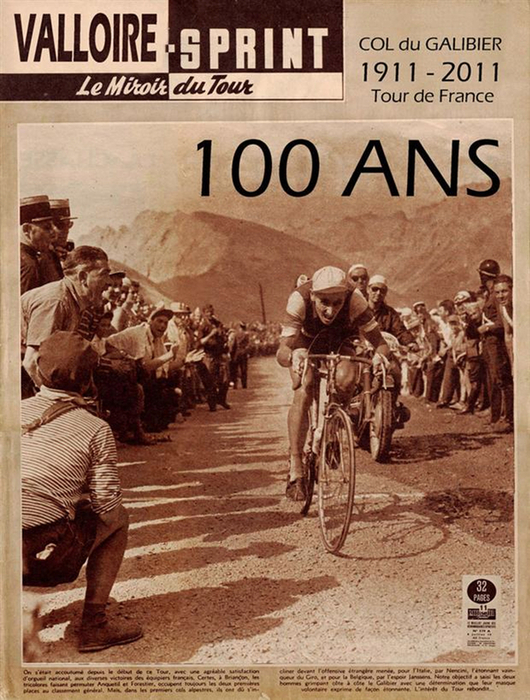 Valloire is the beautiful village and ski station above Télégraphe at the base of the north side of Galibier.  It's a perfect base for a cycling vacation - road or mountain bike.

It has been occupied since the bronze age.  The name Valloire first appears in records in 783.

Col du Galibier was first made crossable for military purposes in 1879 with the sexy name: "Routes des Grands Communication #14."  To simplify the crossing, a tunnel was finished in 1891, roughly 90 metres below the summit. Many high Italian and French alps roads have similar military origins.  Even today, if you take the little gravel road south through the sheep herds at Plan Lachat - a few kms below the col - there is an active high altitude French military barracks at Col des Rochilles (mountain biking heaven).

But a "muletier' (mule track) had existed over Galibier well before 1879.  The Col du Galibier separates the departments of Savoie (north side) and the Hautes Alpes (south side). The Savoie side was for centuries part of the Duchy or Kingdom of Savoy - sometimes independent, but often controlled by ever-changing overlords. Thus, in addition to "colporteurs" (traveling salesmen), the pass was used by "contrebandiers" (smugglers) trying to enter France while avoiding taxes/tolls - especially the hated French gabelle (salt tax). In 1860, France annexed Savoie.

In 1911, a semblance of a road was finished - the same year as the first Tour ascent.

We sometimes talk about how the French Alps are less steep than the Italian Alps.  One reason has been a French focus on making Cols more easily crossable.  This is partly due to the 19th French engineer Pierre Trésaguet who insisted on gradient limits to his roads (he was from the Limousin) - and helped convince many to eliminate the old military tendency to build roads in straight lines regardless of terrain.

The original Galibier road used in the early TdF was in fact steeper on both sides than it is today.  On the north side, old Michelin maps show a 14% grade above the last village of Bonnenuit - this was replaced by wide, sweeping hairpins sometime in the first half of the 20th century.  On the south side, the last 8.5 kilometres above Col du Lautaret averaged 9.8% until 1947.  The new road now averages only 7.1%.  If you look closely when visiting, it's possible to still see the outlines of the old road.   See the photos here - especially the 4th - showing the evolution of both sides up Galibier.

The Tour de France passed through the tunnel - at 2556 metres - until 1976 when it was closed due to disrepair. Instead, the road above the tunnel was improved on both sides - providing the most spectacular stretches and steepest cycling of each side - and a summit of 2642 metres.  The tunnel was re-opened in 2002 - for cars only.  But from 1976 onwards, suddenly the route to Galibier was higher and roughly a kilometre longer.

"The tunnel should have been opened lower down.  That would have stopped us becoming martyrs."

In 1949, just below the south entrance to the tunnel, a monument to Tour creator (and cyclist) Henri Desgranges was erected (photo below). 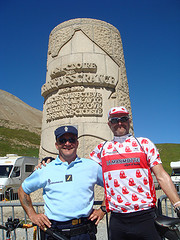 On July 10, 1911 during stage 5, Emile Georget was first over the Galibier during the 366 kilometres stage from Chamonix to Grenoble.  Including Col du Télégraphe, it took him 2h 38m to reach the tunnel.  In 2011, the pros may cut that time in half.

Georget was one of the few riders that managed to reach the Col without touching a foot to the ground.   Whereas Julien Gabory finished in bare feet after losing his shoes in the ruts of the road.

"You are bandits" declared 1911 Tour winner Gustave Garrigou after finishing the first Galibier stage - which must have delighted Monsieur Desgranges and his newspaper readers. 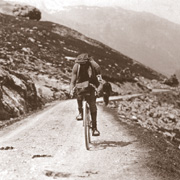 In 1922, Eugene Christophe broke his bike on the descent but was able to borrow the bike of a Valloire priest to continue to the bottom before finding a better bike in Saint-Michel-de-Maurienne.

In 1935, while descending the lower slopes of Galibier below Lautaret, Francesco Cepeda became the first cyclist killed in the Tour de France.

While not widely discussed at the time, there is evidence that there was a problem with new metal rims melting on long descents - and even briefly a rider protest demanding wooden rims for everyone.

There is a good article describing this tragedy and the issue of metal rims here (in French). 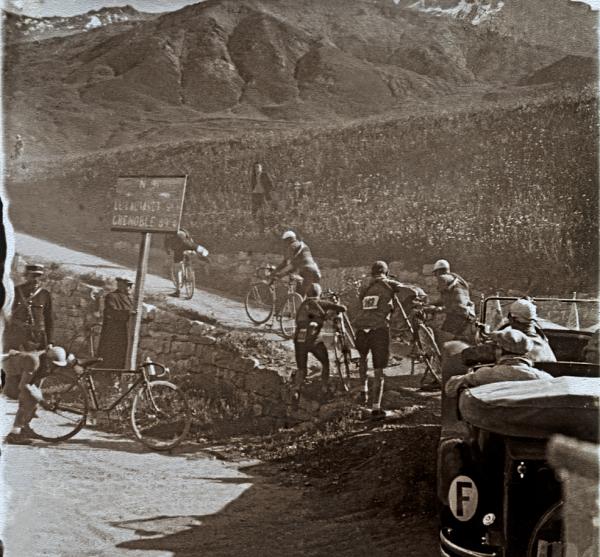 Above photo used with permission.   All rights:  The Cycling History Collection

Riders climbing a mountain in the 1930 Tour had only two gears. They had to physically stop and remove their rear wheel and turn it around to engage the gear/cog on the other side of the wheel.   Here the riders turn left at the Col du Lautaret for the last few kilometres to Galibier.  Using the "old" route which was steeper than the current route 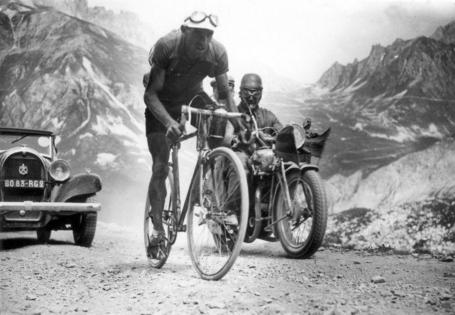 Above, Spanish rider Federico Ezquerra was first to cross Galibier in 1934.

1939, Henri Desgranges himself watches a rider fix a flat tire on Galibier.

Frederico Bahamontes was first over Galibier in both 1954 and 1964 on the way to winning 6 best climber prizes (before it was the polka dot jersey).

In 1955, here Louison Bobet was well behind Charly Gaul on Galibier, but on his way to his third Tour de France overall victory.

In 1957, Marcel Janssens was first over.  Marcel and a cool support motorcycle.

In 1966,  Anquetil and Poulidor battled up Galibier side-by-side in a stage reminiscent of their Puy-de-Dome duel two years earlier.  Just before the tunnel, Anquetil offered Poulidor a drink.  Poulidor refused saying "I wasn't thirsty."

In 1967, Pingeons suffered the bonk after passing Plan-Lachat but still several kms from the summit.  Poulidor played the perfect team-mate waiting and escorting Pingeons to the summit and eventually his only overall Tour victory.

In 1969, Eddie Merckx sprinted ahead of Gimondi to reach the Col first on the way to winning his first Tour de France.

In 1998, Marco Pantani would be the first over Galibier - winning a key stage at Les Deux Alpes on his way to winning the Tour. While his main competitor, Jan Ullrich, suffered badly on the cold Galibier descent.

In 2003, Armstrong descending the Galibier.

Here is a short slide show of some photos of both sides of Col du Galibier.  WARNING: they are just personal pics, sometimes during a ride, and sometimes watching the Tour.